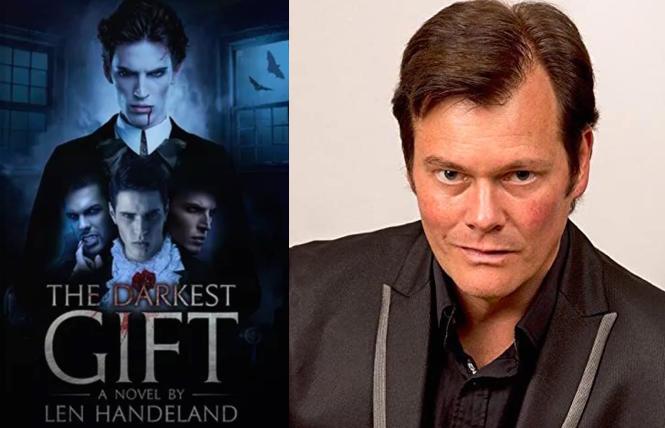 Len Handeland's debut novel The Darkest Gift is the perfect book to read on a dark and stormy night. This tale of Fabien and Laurent, two gay vampires who meet and fall in love in 18th-century Paris, is romantic and, at times, downright scary.

Handeland's story covers a lot of ground. After Fabien is destroyed by the jealous vampire Stefan, a broken-hearted Laurent moves to New Orleans, where he mourns his lost love for 200 years. In the 1980s he meets Jack, a self-loathing gay man who bears an uncanny resemblance to Fabien. But then Fabien's spirit overtakes Jack's body. Will the lovers be reunited, or will Stefan return to tear them away from each other again?

The author lets his readers know who these characters are. Entire chapters are devoted to characters' backstories. We learn a great deal about Jack and his life in the closet as well as his disastrous marriage to a woman. We follow him into the gay bars of New Orleans, where he picks up a variety of men and has a series of meaningless one-night stands.

We also learn quite a bit about Laurent's life as he mourns his lost love. Laurent is a vampire with a conscience and does not kill human beings when he needs to feed. Instead, he feasts upon the blood of animals.

When Raphaella, a spirit medium whom Jack befriends, enters the story, the reader is told all about her life in Haiti, before she moved to New Orleans. These backstories lets readers know exactly who these characters are and what their motivations are, which gives them a lot of depth and makes the reader care about them.

Handeland also takes his readers on a journey to 18th-century Paris and 20th-century New Orleans. His descriptions of these times and places are vividly described and bring the cities to life. The book is an obvious homage to the stories which inspired Handeland in his youth: Bram Stoker's Dracula, Barnabas Collins on the Dark Shadows TV series, and mostly, the writings of Anne Rice.

"Anne Rice was one of the few authors that wrote about these strange and mysterious creatures as if they truly existed," Handeland said in an interview. "Her books blurred the lines between fantasy and reality. The fact that she featured a same-sex couple in her book Interview With the Vampire with Lestat and Louis as well as in her other vampire books, to me that was groundbreaking. She as a straight woman writing about a same-sex couple to me was simply nothing short of revolutionary."

Handeland said that it was important for him to not be overtly sexual in his writing. He prefers to focus on the sensual rather than the sexual, and on the romantic.

"Also noteworthy was addressing stereotypes regarding vampires and some of the gay men in my book," he said. "That all vampires are evil and unfeeling creatures, that all gay men are effeminate couldn't be further from the truth. I utilized the classic tale of good versus evil, in this case, vampire against vampire, and how one of the human characters, Jack, despite his struggles with his sexual orientation, finally learns to accept and embrace who he truly is. People who know me would say that I have a pretty vivid imagination, but saying that other authors haven't inspired me is not truthful."

New Orleans was chosen as the primary setting for The Darkest Gift in part because he spent a considerable amount of time there, and in part because of the city's rich history and diversity.

"New Orleans can also be described as exotic," Handeland said. "There are many paranormal occurrences that have been reported. To me the city is steeped in mysticism, whether that's associated with ghosts, the practice of voodoos and vampires. I also wanted to have the three locations in my book, Paris, Haiti, and New Orleans, share a cultural connection. They all have a French connection."

Handeland believes that The Darkest Gift will appeal to gays and straights alike.

"I believe it will be appreciated by anyone who values, loves and understands the need for a soulmate," he said. "I was cautious not to get too sexually graphic, but instead focusing on the sensual aspect of two men together, whether that's between two vampires of the same gender or a vampire with a human."