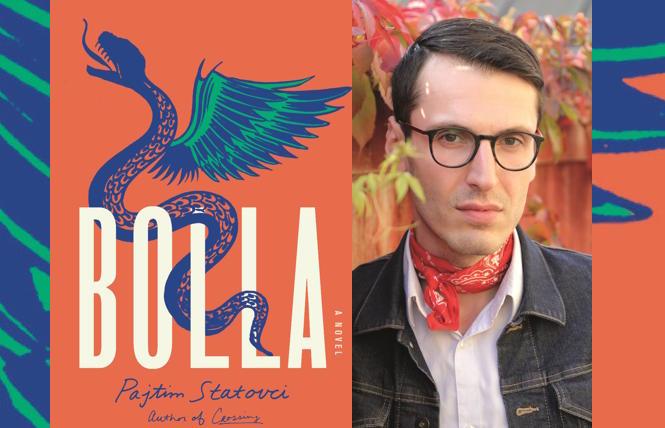 Pajtim Statovci's unlikely success with his first three novels may have had more to do with their subjects' being au courante than with the author's staggering literary genius. My Cat Yugoslavia (2014, translated into equally brilliant English from the original Finnish in 2017 by his now regular translator, David Hackston) addressed what has sadly become a central theme in literary fiction, politely called "immigration" but typically focused on our century's millions of refugees and the nightmares of their daily lives.

In his second novel, Crossing, Statovci broadened his address to include the deadly business of being queer in most of today's world, the extent of which still startles most free-world other-sexuals. In his latest, Bolla (Pantheon Books), he adds to this merciless trifecta the depredations of love and war, particularly when they intersect.

Bujar, the peripatetic protagonist of Crossing (another savvy title, at least in English), insists, "I don't know whether I'm gay or straight" but changes his name to Tanja after his ensorcellment with a trans woman of that name.

In Bolla it's a so-named snake. Make that a serpent-person, a minion of both God and the Devil who inhabits a cave in a landscape otherwise suspiciously like Eden and, on a deal with the superpowers, kidnaps God's daughter (the son has already been sacrificed, or at least slated for a redemptory death). Thirteen years later, "the girl had now become one with her prey, clothed in a magnificent snake skin, in winged majesty, both the girl and the snake [Bolla] living from the darkness and each other."

Balkan conflicts
If you ask me, Bolla could do with more Bolla; the parables interrupt the surrounding narrative too briefly and too seldom. But Statovci's gaze is trained on his love story, which of itself will be more than most readers can countenance.

It will go down easier for those who are steeped in the fiction of Garth Greenwell, where a lovers' getaway to an East European holiday destination is doomed from the start. Statovci's lovers are Arsim, an Albanian, and Milos, a Serb, a Romeo ad Juliet of the gulag taking the fickle sun of Ulcinj.

They meet, in 1995, at the University of Pristina, where Milos is an unlikely medical student and Arsim a failed writer in the making on the lam from wedlock. (The only writing the reader sees him do is a diary he keeps while in prison on a charge of child sexual abuse, of which he may or may not be guilty, what with his having other reasons to prefer life in jail.)

The two fall in secret love and become increasingly attached until the Balkan conflict tears them apart, Arsim decamping to the comparative safety of Belgrade with his steely wife Ajshe (to whom he was already married when he met Milos) and their ever-growing litter of children (who want nothing to do with him) — and Milos goes doctoring on the bloody battlefields.

Arsim, an unreliable narrator not only as a writer but specifically as the "I" character who does most of the story-telling, is a character perhaps only a fellow scribe could love (I did), though we need his more straightforward narrative and understand it all too well. But it's Milos, whose tongue is an incinerating flame and who "speaks" in italics, whose descent into madness holds the reader spellbound.

Early in the novel, before his speech becomes only, terrifyingly oracular, he tells a story that gets burned onto the reader's memory. He attends a fallen soldier, a tale he tells in language redolent of Walt Whitman:

"I have held a friend's heart in the palm of my hand, I have thrust my hand into a chest ripped apart by bullets." Lying on the ground next to the man with the gunshot wounds, he kisses the dying man's lips.

Later, perhaps much later, the revived soldier locates Milos and writes him a letter about the temporarily life-giving qualities of that kiss, before his lasting death from a self-inflicted gunshot wound. The man's father, finding the men's forbidden letters, writes to Milos, promising, "I will end what my son did not: an eye for an eye, I am coming for you faggot."

Such is the pitch at which Statovci writes whatever the voice he is deploying at the moment. At a time when his success is almost unimaginable, he writes as only he can for readers who self-identify by turning page after burning page.