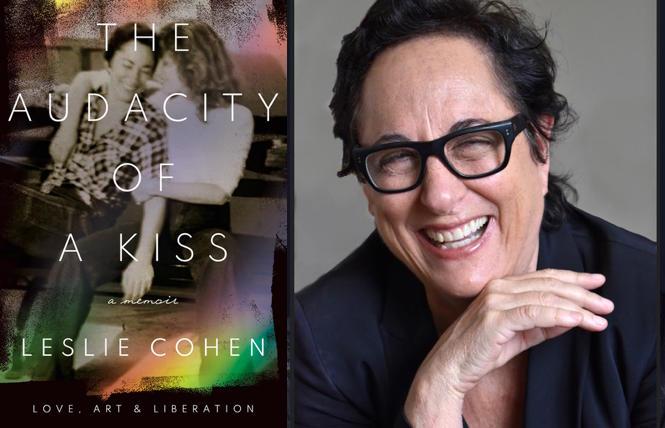 These days there doesn't appear to be any shortage of memoirs, especially by LGBTQ writers, with Lauren Hough's Leaving Isn't the Hardest Part and Precious Bradley Davis' I Have Always Been Me as recent examples. But one memoir, in particular, stands out, and that's The Audacity of a Kiss: Love, Art and Liberation (Rutgers University Press, 2021) by Leslie Cohen.

The reasons for that are numerous, including Cohen's experiences in the art world as well as her partnership in one of the first woman-owned (read: non-mafia) lesbian bars in New York City.

But perhaps it is the way that Cohen and her wife Beth have been preserved in bronze (with a coat of white paint) by sculptor George Segal in his celebrated Gay Liberation sculpture in Christopher Park across from the Stonewall Inn, that separates her story from the rest.

These are just some of the subjects you can read about in The Audacity of a Kiss. Cohen, who has called Miami for nearly 30 years, was good enough to make time for an interview in advance of the publication of the book. 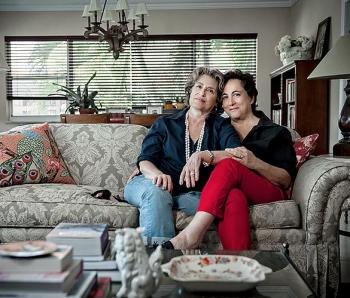 Gregg Shapiro: Leslie, I thoroughly enjoyed reading your memoir, The Audacity of a Kiss. Why was now the right time to write your story?
Leslie Cohen: Actually, I started thinking about writing this story back in 2009, after I retired from practicing law. Without being pedantic, I felt the need to educate and fill in certain gaps of history. The reasons I was so motivated to write this memoir, even though I had never really written anything before, was twofold. Beth and I were the models for George Segal's iconic sculpture Gay Liberation in Greenwich Village in New York City.

I tried to imagine what it would be like for people, years in the future, passing it by and perhaps wondering who these women were. I wanted them to know our history. I wanted them to know that these women spent their lives together (we met in 1965 and have been a couple for almost 45 years) and were very much in love. I wanted to inform and inspire and help those who are suffering with their identity to see a positive future for themselves.

The second reason I wrote this memoir was to tell the story of Sahara, opened in 1976, because if I did not memorialize it in some fashion, it would be lost to the annals of history. Sahara was the first club created and owned by women for women in 1976 in New York City.

My partners, Michelle, Linda and Barbara and I had created a groundbreaking women's club and our accomplishments and the club's significance were being disregarded, never mentioned in the 30 plus years since in any writings on the history of feminism, gay rights or nightclubs, straight, gay or otherwise, of that freewheeling era.

We were just becoming more invisible women added to the pile of absentee women's history. I did not take well to being ignored, not in light of my feminist understanding of the historical treatment of women or lack thereof. My motivation, pure and simple, was to record for history's sake what I and others thought was an important contribution to women and LGBTQ+ history. I realized that if I didn't write the story no one else would.

As you were writing the book, did you have a target audience in mind?
Of course, being queer myself and owning and promoting women's clubs for so many years, my target audience was LGBTQ men and women. I wanted those who are questioning their sexual or gender identity to know there is the possibility of resolution and happiness. But I also very much wanted to extend the audience to the cis community because the subjects discussed are universal: coming of age, the struggle to define yourself, relationships, survival, love, loss, failure, and resurrection. My desire was to touch the emotional and empathetic chord we all share.

The first two chapters are striking in the way they present both innocence and experience, in terms of both the good and bad aspects of family, childhood, adolescence, and young adulthood. Do you think that tone is a reflection of the time period of those particular chapters?
I think that when we are young and unaware, be it now or when I was growing up, we want to fit into prescribed notions of 'normal.' Who our parents are and the circumstances surrounding our upbringing, i.e., divorce, death, attentive and loving parents or not, affects every child and young adult in different ways no matter whether we were growing up during the 1950s, '60s, or now.

The struggle is the same in those respects, but it certainly is easier to be LGBTQ now. The media has presented so many images and stories about being LGBTQ since the time I was growing up, and there are new words being formulated every day to help us identify ourselves on a spectrum rather than on the binary absolute. We can see ourselves more readily reflected in others and that makes being queer easier (but not necessarily easy) for many. 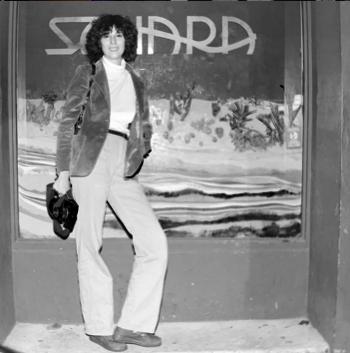 There is also an unhesitant honesty in those chapters. Do you think that the book would have the same tone if you had written it 10 or 20 years ago?
There are family and friends that I write about that have passed on. This gave me more freedom to be totally honest. I don't know if I would have written with the same degree of forthrightness if they were alive because I would not have wanted to hurt or embarrass them.

You write about discovering creative expression and boundary-breaking through dance and visual art, a theme that would continue throughout your life. Would you say that your exposure to and presence in the world of the artists was the most formative experience of your life?
I don't know if I can say it was the most formative experience, but it was definitely right up there. I was also strongly influenced by the revolutionary atmosphere of the 1960s and 1970s. It was a time of profound change.

In the book, you talk about all the reading that you did at the beginning of your coming out. This made me wonder what it would mean to you to have The Audacity of a Kiss thought of in the same way as some of the titles you mentioned.
It would be incredible, a dream come true! It would be tremendously rewarding and fulfill my purpose for writing this memoir. 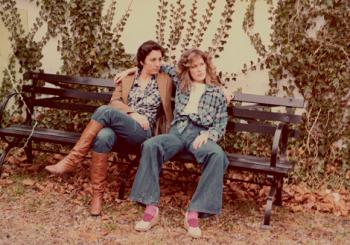 In addition to writing about books, you mention the impact that movies such as Taxi Driver had on you, as well as studying filmmaking and working as a production assistant. If there was a movie adaptation of your book, who would you want to play you and Beth?
It should only happen! Since this memoir covers an expanse of time it might require different actresses in different age groups. As the older Beth and Leslie, from ages 28 on, I think Margot Robbie could play Beth and Jessica Clark, Leslie. As the college age and 20s Beth and Leslie, perhaps Bella Thorne as Beth and Sterling Jerins as Leslie. There's such a vast array of talented actresses out there. I'm curious to know what others think.

One of my favorite moments in the book occurs in chapter six, the part about coming out to your mother, to whom you were very close. What did it feel like for you to share that story?
It reminded me of the deep fear we had of sharing our sexuality at a time when being queer was considered shameful and perverse. I was so afraid of losing her love. It also reminded me of the deep love my mother and I shared and how special she was. Thinking of my mother always brings tears to my eyes because I miss her so much.

About Sahara, your legendary lesbian bar, you wrote, "Our club would be an oasis in the desert of conformity. It would be a place in the world where women could feel self-respected and safe." What did it mean to you to be able to incorporate your other passions — art and music — into the space?
If you are familiar with Abraham Maslow's concept of self-actualization, this was the only time in my life where that occurred, where my personal potential was realized in the fullest way possible. It gave me meaning in life. It appealed to all the aspects of what gave me joy and allowed me to create something bigger than myself. 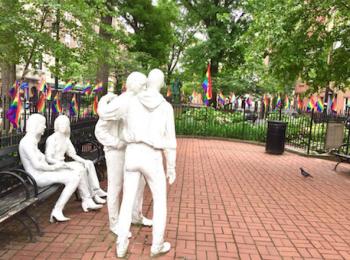 During Pride Month/June of 2021, there were news stories about the decline in number of lesbian bars in the U.S. As someone who has a place in the history of women's bars, what are your thoughts on this matter?
I was proud to be interviewed for the Lesbian Bar Project to discuss Sahara and give the LBP more of a historical perspective. I think LBP is wonderful because I am a true believer in the need for women's clubs as spaces of community and shared experiences.

Central to the story is your relationship with Beth, including your reunion after having been apart for a few years. Because Beth is such a major part of your life and the book, how involved was she in your writing of the story?
She was integral. She shared her thoughts, her memories, her words. She read so many drafts that we lost count. She buoyed me up whenever I was in doubt. She was my rock.

You and Beth are immortalized in George Segal's Gay Liberation sculpture in Christopher Park at Sheridan Square, across the street from the Stonewall Inn, about which you write in the book. In the lengthy list of your accomplishments, where does this rank?
I don't know if I would call this an accomplishment or a stroke of fate and/or luck. At the time this sculpture was created by George Segal in 1979, very few people were out. We were among the few. Visibility has always been an important mission for both of us. Needless to say, we are extremely proud to have modeled for this sculpture. It immortalizes our love and our pride in the LGBTQ community. Frankly, the fact that we are part of this iconic sculpture overwhelms us because of its immortality!

The 45th anniversary of Oct. 20, 1976, described in the book as "the night we knew there was no turning back," regarding your relationship with Beth, is approaching. Do you have special plans to mark the occasion?
Not yet! Maybe a nice dinner in Miami or New York City or a long weekend in Paris!

In closing, please say a few words about living in Miami, where you have been located since 1992.
It's a beautiful place to live. The palms swaying, the turquoise waters and pastels, the sweet-smelling tropical air, the diverse cultures, are incredibly seductive. As long as you can leave in the summers! 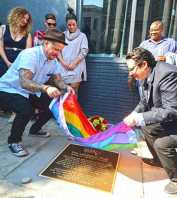