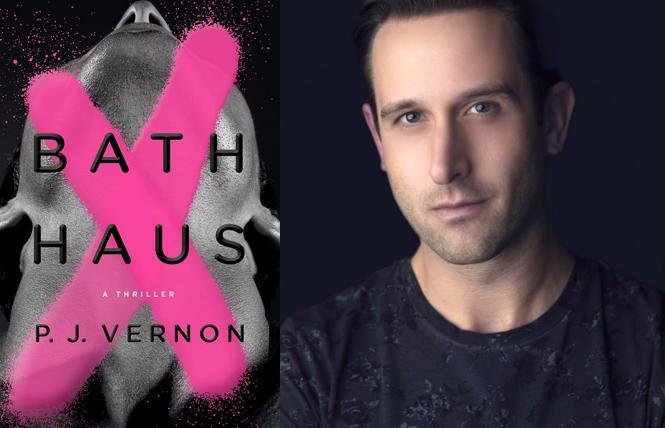 Author P.J. Vernon's dynamic and impressively exhilarating follow-up to his debut, the 2018 psychological thriller When You Find Me, explores what happens when a cheating boyfriend meets a sexy, vendetta-driven psycho at a bathhouse.

At the center of the action in Bath Haus is Oliver Park, 26, a Washington, D.C. recovering addict who, in a moment of weakness and carnal desperation, scurries off to partake in the supposed "consequence-free expression" of Haus, a gay sex club.

His partner, Nathan Klein, away on business, calls to check on him, but ends up leaving a message as Oliver has sex on the brain and little else. He finally finds it within the dank, sweat-soaked confines of the club in the form of Kristian, a hunky seductive slice of man who offers just the right combination of danger, devilry, and dick that Oliver craves (and the kind he can't find at home in the bed of his wealthy surgeon husband).

Nathan's perspective is offered in alternating chapters as he laments the slow "exsanguination" of their marriage and intricately begins piecing together the truth behind Oliver's increasingly panicked behavior as Kristian reappears in Oliver's already frenzied life to wreak more havoc upon it.

Kristian is one of those deviously obsessive types, first showing up at Oliver and Nathan's home under the guise of a home repairman, then chatting him up on other hook-up apps, and sending anonymous text messages. He's seemingly on a mission and just won't quit unless Oliver fesses up to Nathan about his cheating ways.

Enter a policewoman who quickly becomes exasperated with Oliver's need to cloak his indiscretion with lie after lie; she issues an ultimatum. But the author knows how to sucker-punch his riveted audience and switches things up in grand fashion with the discovery of Kristian's murdered body while the text messages continue rolling into Oliver's phone.

As things unravel further, the suspense ratchets up as well: Who is the real killer? And will Oliver find out before it's too late? Only the Haus facility's randy towel boy knows for sure, apparently.

Vernon wrings as much tension as possible out of his simmering, cleverly imagined plot line and a pair of anchoring characters who pivot from self-protection mode to screaming mad dash in the face of grave danger.

But is the novel's embedded lesson not to cheat on your husband or to just get a piece of the action if you absolutely must, just don't get caught with your hand in the cookie jar? Life lessons barely matter here since this thriller is a fast-paced joy to read. With this second suspense novel, Vernon is setting himself up to be quite a literary force in the gay fiction universe.

Among the particularly plentiful LGBTQ summer reads that have popped up this year, this one lands near the top of the heap. We can't wait to see what P.J. Vernon has in store next.

Michael Nava's 'Lies With Man' brings back the mystery