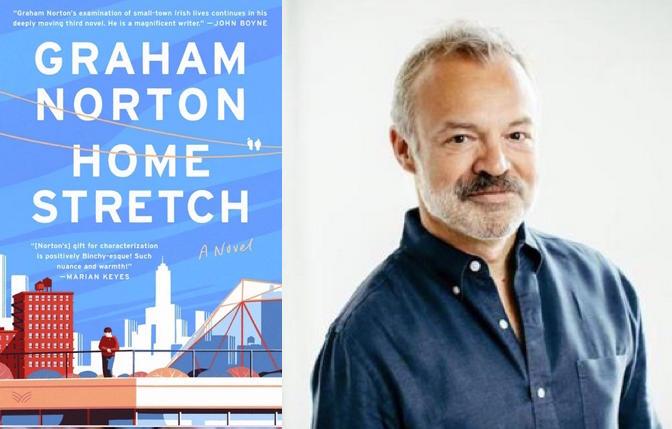 When you hear the name Graham Norton, you picture his savvy, freewheeling British television talk show (on BBC America and YouTube) with star guests from England/U.S., featuring audience confessions, prank phone calls, and raunchy anecdotes. The celebrities feel they can be their true selves and have good bawdy fun. Norton himself comes across as campy, flamboyant, playful, and energetic.

So when readers turn to his new novel (he's previously published two novels and a memoir), one might expect similar characteristics to appear in the plot and his characters, but they would be mistaken.

Home Stretch reveals a more quiet, restrained, literate persona, but you won't be disappointed in Norton's alter ego, as this is a stirring, gripping, compassionate tale that will have your fingers turning pages as fast as your eyes can read. While the book won't win any literary prizes, it is an unexpected insightful character-driven delight that is as binge-worthy and compelling as any trending Netflix series.

The novel's central event is a 1987 car accident outside a small fictional Irish town called Mullinmore when a car carrying six people driving home from a day at the beach, hits a roundabout and crashes. Three passengers die, including a couple who were to be married the next day plus their bridesmaid. The accident leaves the bridesmaid's sister Linda in a coma and later paralyzed for life. Only two people are unhurt: medical student Martin Coulter and barkeeper Connor Hayes.

Connor eventually confesses that he was driving. The ramifications of this crash will ricochet in the town for decades, affecting every character in the book.

The town blames Connor, and his parents arrange for him to take a construction job in Liverpool, in the hope he can return later when he won't be a reminder of Mullinmore's tragedy. Away from home, Connor deals with his sexuality, realizing he's gay. He moves to London without telling his family, breaking off contact with them.

Meanwhile Connor's sister Ellen marries Martin Coulter, who's now a doctor, but their union is an unhappy one despite producing two children. Connor will meet Tim, a businessman and as a couple will move to New York. As Connor observes, "If I hadn't been forced to run away, who knows how long it would have taken me to become this man?" But an unforeseen familial reunion will make Connor realize he can't escape from his past or his regrets. He must decide whether to return to Mullinmore and face the consequences of what happened in 1987.

As the novel spans 32 years, Norton cleverly conceals parts of what happened on that fateful 1987 day, but reintroduces details about the accident periodically to advance later startling plot twists. This shifting between time periods creates suspense about what stigmas and secrets led to the crash, heightening readers' interest.

Sexuality plays a major role in understanding that grisly tragedy and induced trauma, but Norton's underlying motivation is to convey how Irish culture changed through the decades so that eventually it became the first country in the world to introduce marriage equality by popular vote. Home Stretch is as much about the journey of Ireland from intolerance toward queer acceptance as it is about the impact homophobia placed on Mullinmore.

Norton brilliantly interweaves shame, abandonment, and loss, as it shapes the search for identity within the confines of a tight-knit community. He exhibits an unobtrusive, down-to-earth honest writing style reflecting the mostly working-class characters he brings to life. But he never scrimps on the layers of intense emotion always hovering below the surface of what seem like commonplace events.

Norton is also intent on reminding younger people that the open, free lives they are experiencing and taking for granted now were fought for at a heavy price by older generations, that a debt has been incurred. In interviews, Norton reprimands himself for leaving Ireland and emigrating to England to seek liberation rather than struggling for it at home. Home Stretch can be read as partial atonement for his lapse.

Ultimately, Norton asserts that in order to find oneself, you have to locate your place within the world, where you can be yourself without regret, shame, or excuses. And part of finding your niche is making peace with one's past as the only way to move forward.

This seems very relevant for queer people today trying to forge their mark in the world, often striving for new beginnings in alien locales. Readers will find themselves unexpectedly moved by these flawed characters, even empathetic to the ones whose actions are despicable. With Home Stretch, we are in the hands of an expert storyteller in a book hopefully you will love as much as this reviewer.