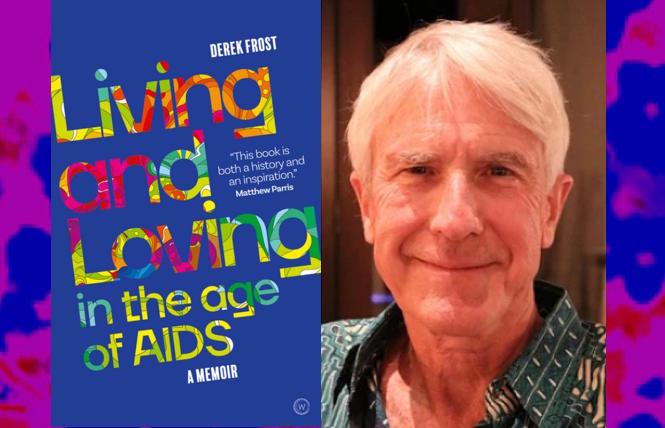 In this honest and poignant remembrance of the years before, during, and after the scourge of AIDS, celebrated designer, photographer, and artist Derek Frost escorts readers into the dark, devastating heart of the 1980s and beyond.

Even in the 1980s, their idea of coupling was progressive, open, and non-restrictive: "Why close doors when others open?" Frost writes of his union with Norman. But the specter of AIDS hovered over the community and when Norman tested HIV positive, the couple considered it a certain death sentence even as he was placed on AZT therapy, which, at the time, became just as terrifying a reality as the diagnosis itself.

Frost's partner would endure a host of mysterious illnesses and see-sawing T-cell levels throughout the six years following his positive test. While it placed a strain on their relationship, it also fortified it. The couple would become stronger, staunchly united in the goal of staying alive and remaining together no matter what they were forced to confront.

Frost's narration is heartfelt and often quite moving as he intimately describes the terror of a decade where the term "AIDS" became commonplace, the staggering amount of heartbreaking funerals he and Norman attended, and the years of fighting against public stigma while striving for equality and liberation.

His portrait of this formative era in gay history is a critical reminder of what today's older generation struggled to overcome in order to pave the way for the contemporary community to survive and live freely.

Frost's memory is impeccably keen as he describes what gay life was like in the mid-1960s when he was enjoying his first sexual experience at a screening of the first episode of Doctor Who, or his passion for an older boy that became accidentally exposed to the neighborhood he lived in, or coming out to his parents at 24, to their surprising acceptance.

Frost and Norman's numerous visits to Key West over the years are immersive and exacting in mood and detail as the liberal, uncritical location in 1981 hosted a "constant tropical languid sensuality which perfumes the air and informs our behavior." There, particularly in the pre-AIDS era where rumors of a "gay cancer" were just beginning to simmer, the party was blameless, gloriously cocaine-fueled, and featured the passionate bodies of hot-blooded Cuban boys who lived and loved with great enthusiasm and style.

Through the bigotry of Anita Bryant, the shocking death of Rock Hudson, Princess Diana's groundbreaking hug of an HIV-positive gay man, the advent of safe sex, ACT-UP activism, and CD4 counts: all of the indelible history markers are here and made exquisitely personal as the memoir progresses through years of good times and bad. Most readers will remember each with a painful wince, but will remain grateful that books like Frost's are available as a necessary reminder of where we've been and what the road ahead will show us.

Together, Frost and Norman would go on to start a number of memorable businesses including the Embassy Club (opened one year after they'd met), the iconic Heaven nightclub, and the Soho Athletic Gym, in addition to two charities, one of which, AIDS Ark, continues to save the lives of people in dire need of medical treatment and live-giving supplies in parts of the world where AIDS meds are scarcest.

This resonant memoir forms both a unique history lesson and a memoir of two men who managed to beat the odds to share their remarkable story of survival and self-preservation.

Living and Loving in the Age of AIDS by Derek Frost, Watkins Publishing, $16.95
www.penguinrandomhouse.com

Dark shadows & radiant light: Joseph Caldwell's memoir 'In the Shadow of the Bridge'
Sign up!