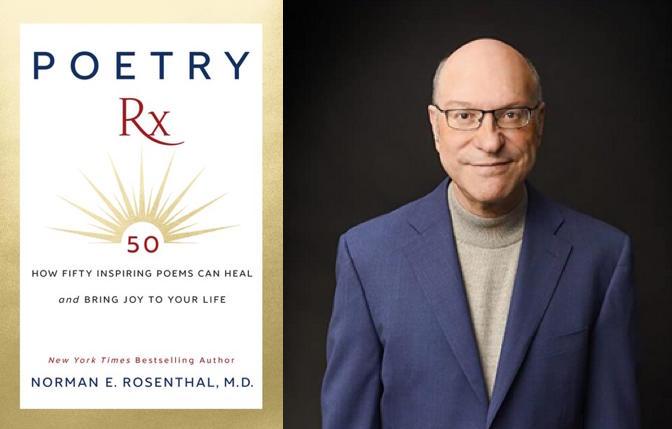 Often the first things to come to mind when we think of wellness and self-care are physical and psychological states and the tools available to help us achieve goals in feeling good and thinking better. Psychiatry, psychology and talk therapy, medications, nutrition and exercise, and a plethora of alternative treatments such as Chinese Medicine, Ayurveda, massage, acupuncture, EMDR, yoga; all possess considerable value. We might also add to our therapeutic regimens the ancient art of poetry.

The newly-released collection Poetry Rx of 50 inspiring poems, compiled with commentary and poetical analyses by psychiatrist Norman E. Rosenthal, M.D. (Gildan Media, May 2021), arrives in time for Pride Month with more than a third of the poets having either openly identified as queer, or skewed in favor of LGBTQ orientation.

Dr. Rosenthal is a pioneer in psychiatric care at the National Institute of Mental Health and is responsible for having identified Seasonal Affective Disorder (SAD) and the light therapy used in treating the condition. A clinical professor of psychiatry at Georgetown Medical School, Rosenthal has researched innovative psychiatric treatments and is author of several books including the New York Times bestseller Transcendence: Healing and Transformation through Transcendental Meditation and the national bestseller Super Mind.

"In organizing the work," says Rosenthal, "I was impressed by how many of the poets would have identified as members of the LGBTQ community were they alive today. In fact, more than one third of the poems were written by such poets, and considering the taboo against 'the love that dare not speak its name,' the number is probably larger."

Elisabeth Bishop (1911-1979), who wrote the famous poem "One Art," was the first of the queer poets to set Rosenthal on the quest to search for poems particularly therapeutic and inspirational. Written to her lover Alice Methfessel in the wake of a breakup, Bishop saw the poem through seventeen drafts:

"The art of losing isn't hard to master;
so many things seem filled with the intent
to be lost that their loss is no disaster.

Lose something every day. Accept the fluster
Of lost door keys, the hour badly spent.
The art of losing isn't hard to master.

Then practice losing farther, losing faster:
places and names, and where it was you meant
to travel. None of these will bring disaster... "

W.H. Auden is the most openly gay of the queer poets of Poetry Rx. The collection includes his "Lullaby," written to his younger male lover after a night of sex, and one of the most acclaimed love poems of the last century. Auden:

"Lay your sleeping head, my love,
Human on my faithless arm;
Time and fevers burn away
Individual beauty from
Thoughtful children, and the grave
Proves the child ephemeral:
But in my arms till break of day
Let the living creature lie,
Mortal, guilty, but to me
The entirely beautiful..."

Rosenthal includes Auden's "Funeral Blues," written after the loss of his male partner, and "Musee Des Beaux Arts" among the many renowned works written during the poet's lifetime.

Edna St. Vincent Millay (1892-1950) is celebrated for her famous sonnets written to men. Millay preferred to be called Vincent and reportedly had serial and simultaneous sexual relationships with women at Vassar College where she studied. She won a Pulitzer Prize for her poetry in 1923. She wrote "The Heart versus the Mind":

"Pity me not because the light of day
At close of day no longer walks the sky;
Pity me not for beauties passed away
From field and thicket as the year goes by..."

Rumors about the sexual orientation of William Shakespeare (1564-1616) have circulated ever since he first began his celebrated career as a playwright and poet. Three sonnets in the collection were all written to a young man wherein one of the most quoted poems in history, "Shall I compare thee to a summer's day," Shakespeare first declares his love for the young man and "promises him immortality by memorializing him," says Rosenthal. "Shakespeare was in fact correct when he wrote":

"So as long as men can breathe or eyes can see
So long lives this, and this gives life to thee"

One of America's best-known poets of the nineteenth century is Emily Dickinson (1830-1886). A near life-long recluse, her deepest relationship was channeled to her sister-in-law Susan Gilbert. Dickinson wrote hundreds of letters to Gilbert and in one asked "Susie, will you indeed come home next Saturday and be my own again, and kiss me... that the expectation once more to see your face again, makes me hot and feverish."

In reading Poetry Rx, you'll find that not only are there moving poetic contributions from past queer authors, but that Rosenthal works intently to underscore the value of poetry as a reliable friend to turn to when one doesn't quite know how to work through a personal problem. While therapy holds deep value, sometimes simply reading a few poems can guide us in thinking differently; which has been the goal of poets and their work since having started to work in the poetic form.

"The idea of this book is that poetry can not only inspire and delight, but can actually make you feel better, soothe your pain, and heal psychological wounds... Poetry can act as a kind of medicine." The chapters include essays on self-help and address the questions the poems raise, plus notes on a poem's structure, whether villanelles, its tercets, stanzas, lines, meters, iambs, etc. Each chapter includes Takeaways suggested by the doctor.

The Egyptian Greek poet Constantine Cavafy (1863-1933) was born and lived most of his life in Alexandria, Egypt and indulged an open gay life in a city known for its cosmopolitan, liberal atmosphere. In "Waiting for the barbarians" Cavafy dramatizes "in an absurd operatic style how the citizens of an imaginary city have allowed their fear of outsiders" to define their lives. And in "Ithaka" the poet emphasizes the universality of the human experience.

Rosenthal claims Gerard Manley Hopkins (1844-1889) struggled with his "... gay identity and formed a close attachment with a fellow student at Oxford. An ascetic Jesuit monk, Hopkins extolled the diversity of the world.

The great value in Poetry Rx is its ability to illustrate life in its multitude dimensions, the oneness of experience. The collection does its work in providing a source of inspiration and renewal and reminds us that we have a source to turn to purely through the joy of reading a work of poetry.

This Pride, let's celebrate the queer poets and their contributions, the particular value in healing, bringing joy to our lives, managing circumstances of loss, sadness, anxiety, depression, breakups, and shame, keeping in mind that the antonym to shame is, in fact, pride.

The God of San Francisco: SF poet James J. Siegel's new collection knocks on the door to memory
Sign up!