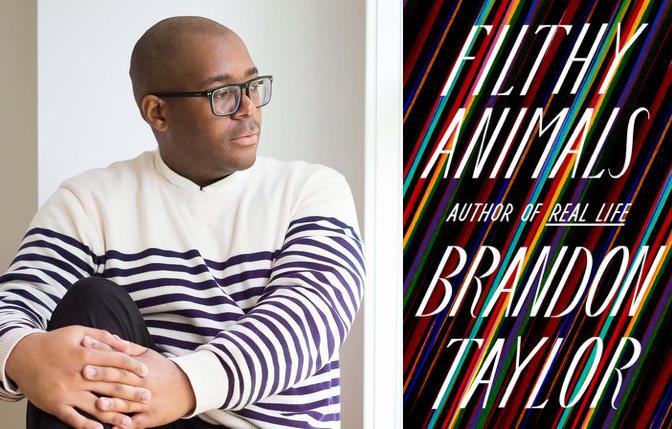 The eleven linked stories contained in Brandon Taylor's second literary foray are, for the most part, dominated by the voice of Lionel, a gay Black graduate student in mathematics who is recovering from a recent suicide attempt and trying to sort out his life piece by piece in Wisconsin's capital city.

In the opener, "Potluck," he attends a party feeling distanced by the other grad students there and unable to enjoy the act of fraternal socialization the others seem to revel in. The very act of using the telephone puts his life into an anxiety-ridden tailspin: "It was another of the things that seemed easy for other people, as if they were born knowing how to use the phone without having their throats close up and forgetting all their words."

A sexually-charged overnight proposition is put on the table by a bisexual duo of dancers, Charles and Sophie, but it's Charles who finds Lionel's charms so addictive that he winds up on his doorstep unannounced one night. Their union is fiery and flush with desire and a creaky sense of trepidation and unease, which is the kind of combination that threatens to overwhelm the fragile Lionel.

As the stories progress, Lionel's personality, rampant anxiety, and mixed emotions bubble to the surface. The story "Proctoring" takes readers deep inside Lionel's job as an exam proctor and how his workplace only serves to exacerbate the love triangle melodrama that dominates the stories.

Though these tales are set in the bleak environments of Midwest college campuses and dried out suburbs, the people and their situations are what bring the set pieces to gorgeous life. The folks populating Taylor's swiftly spinning universe have been created purposefully as unique and extraordinary and this careful characterization seems to be the author's forte.

Taylor's debut novel, the Booker Prize-shortlisted Real Life, buzzed with the story of Wallace, who is much akin to Lionel in that both are graduate students coming of age as gay men at odds with their lives, careers, their existence as Black men, and the relationships which bind and also confuse them.

Throughout the collection, much of Taylor's imagery is exquisitely vivid: Sylvia, the disillusioned female chef and babysitter in "Little Beast," has a moment of exasperation where she wants "to climb on top of the world and tear a hole in the sky. She wants to slip out of herself and all that is and all that was, to be divorced from everything it means to be a person in the world."

In the closing story, "Meat," Lionel does even more introspective musing about the "complicated sinuous patterns" of his relationships and his function within their serpentine depths. He finally just gives in and, lost in the arms of Charles, lets him cut his hair and then, inexplicably, burn it in the yard.

While not all the stories in the collection are of uniform excellence, the ones that are gel into a magnificent memorable reading experience saturated with all the high drama and the low-down pettiness of relationship dynamics.