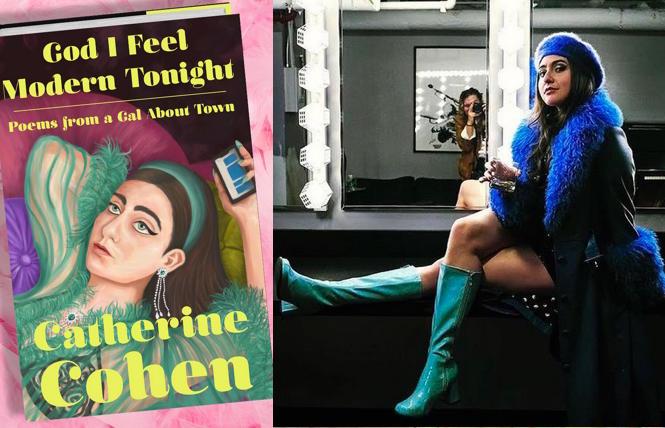 Over the years, poetry collections have come from some unexpected writers. Actors Ally Sheedy, James Franco, Amber Tamblyn, Viggo Mortensen and even Jimmy Stewart, as well as musicians Alicia Keys, Billy Corgan, Jill Scott, and Jewel, are just a few who have shared their words with us. Houston native and New York transplant Catherine Cohen is the latest.

An actress (High Maintenance and The Lovebirds), comedian and podcaster (Seek Treatment), Cohen's debut poetry collection God I Feel Modern Tonight: Poems from a Gal About Town (Knopf, 2021) has just been released. Striking a careful balance between the poetic ("I love sex and I love before it—/the double vodka soda leg touch") and the playful ("going swimming is an amazing way/to stop being on your phone"), Cohen never ceases to entertain. I spoke with Catherine shortly after the book was published.

Gregg Shapiro: Your book God I Feel Modern Tonight is subtitled Poems from a Gal About Town. Were you a gal about town in (your native) Houston or did that come later?
Catherine Cohen: [Laughs] no, I was definitely not a gal about town. I was just at my parents' house studying and singing musical theater alone in the shower.

"Poem I wrote after I asked you if cereal can expire" was published in Alice Quinn's 2020 anthology Together in a Sudden Strangeness: America's Poets Respond to the Pandemic. What did it mean to you to have your work included in that collection?
I was so honored. So many poets I admire are in the collection. I also felt special to get to write something about the current moment and have it out in the world so quickly.

In "Poem I Wrote After You Ordered Fried Shrimp at the Diner and I Was Like 'Gross' but Really I Was Like 'Dang That Sounds Good'," from God I Feel Modern Tonight, you mentioned The Paris Review and whenever I talk to or interview an author, I always ask them about what they are currently reading.
What am I reading right now? I'm reading a great book called We Keep the Dead Close by Becky Cooper. It's part memoir and part investigative study of a murder that happened at Harvard in the '60s. It's just fascinating and I'm really enjoying that. I just finished Stephanie Danler's memoir Stray, which I could not put down. I thought that was so fabulous.

God I Feel Modern Tonight is coming out at a time when there is a sudden renewed interest in poetry because of Amanda Gorman, who read her poem "The Hill We Climb" at the Biden/Harris inauguration, and recently performed at the Super Bowl. What do you think of her as a poet and performer?
I think she's amazing. I think it's so exciting to have so many people who wouldn't normally be interested in poetry now paying attention to it. I think it's really cool and I really admire her.

Do you have another book project in the works, or are there film or television projects you'd like to plug?
Yes, lots of stuff in the works. I would love to do a collection of essays next. I'm developing a few other things that are still in the early stages. For now, I'm just working on the podcast and auditioning and thinking of all the things I want to do next. I would love to do some kind of outdoor event if the COVID situation permits. That would be fun. It's been really nice doing these virtual events. I've been really surprised at actually how fun and interactive they've been. But it would be really nice to celebrate in real life. So, we'll see.