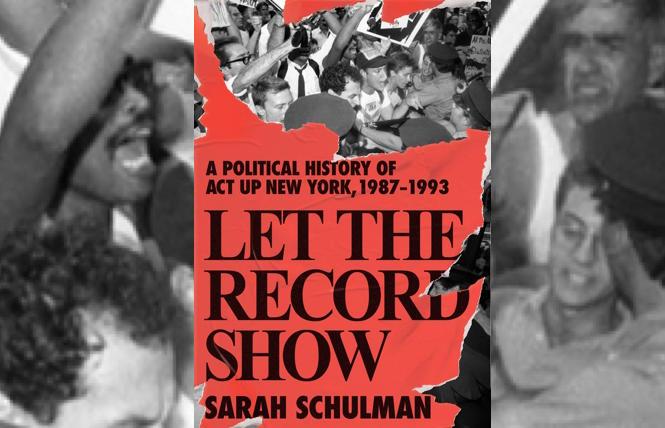 In the lengthy Let the Record Show: A Political History of ACT UP New York, 1987-1993, author Sarah Schulman documents and analyzes the ideals, actions, successes and failures of the people who made up the AIDS Coalition To Unleash Power, specifically the first chapter in New York City, from its early days to its diminution in the early 1990s.

This is not a chronological history. Schulman divides the more than 700-page tome into 'books,' sections that take on specific subjects. The influence of feminism, the conflicts of racism within and outside the group, and the divergence of street theatre protests and scientific research make up the tree of knowledge and empowerment the organization brought to its members and to People With AIDS.

In the Preface, Schulman wastes no time in critiquing popular culture's interpretation of the AIDS crisis, from the film Philadelphia to the play Angels in America, in which, she notes, playwright Tony Kushner used AIDS as a metaphor, not a historical account.

The most interesting parts are not so much the theory and rhetoric, but excerpts from interviews Schulman conducted over several years, with film director Jim Hubbard, those interviews and archival meeting and protest footage would later become the film United in Anger (link to film).

Full disclosure; I was an active member of ACT UP/NY from 1988 to 1992, and participated in most of the larger actions documented in Let the Record Show, along with the hours-long weekly Monday night meetings held at the Gay and Lesbian Community Center, and later, as ACT UP grew in numbers, at Cooper Union.

With 188 interviews (which can also be viewed online via various libraries and museums), the book provides multiple insights and reflections from the major organizers and members in the organization. Some participants, like myself, who devised smaller yet clever actions, declined to be interviewed.

Much of the book is Schulman's own writing, in which she contextualizes, at length with accuracy, the times in which New Yorkers lived. From Mayor Ed Koch's indifference to homelessness and poverty, to the injustices in healthcare towards women and people of color, the overwhelming governmental neglect and incompetence set the stage for the AIDS epidemic, and activists' call for alarm.

Schulman does not gloss over the problems within ACT UP/NY. From financial swindles to rifts between members, to the much-argued decision to protest the Catholic Church both outside and inside St. Patrick's Cathedral in December 1989, disagreements are documented as well as allegiances.

One of the major successes of the movement was the focus on access to treatments. That included sub-groups who targeted double-blind placebo tests as cruel and useless, when PWAs were more than willing to be test subjects.

Along with epidemiological breakthroughs, through the interviews and recollections, the humanity of ACT UP members is recalled. Many in the group were working toward national and global solutions while eagerly seeking any information on potential beneficial drugs to actually help them, at a time when the toxic AZT was the only approved medication. 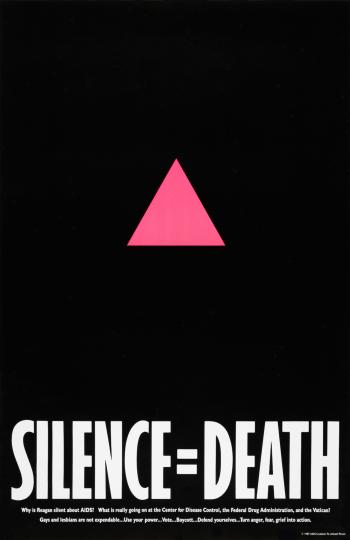 We organized and attended memorials, almost weekly. We endured lengthy discussions, but also banded together in numerous interlinked social —and yes, romantic— circles. While there were deaths, there was also a vibrant tribal connection. As prominent ACT UPer Jim Eigo is quoted, "It was the most splendid idea of community I've ever been a part of."

Eigo and retired chemist Iris Long were the co-creators of the Treatment and Data newsletter, and among the 'insiders' who spent years negotiating with FDA and NIH representatives, including Dr. Anthony Fauci, to expand access to drug trails.

Early in the book, in a section focusing on Puerto Rican ACT UP members' work, Schulman admits that the group's membership was mostly white and male. Yet with a broad focus that eschews the (also white male) media gaze, she shares the stories and work of the many women and POC members who contributed greatly to the organization's successes. Each featured interviewee is also given a brief personal background.

The years-long struggle to redefine AIDS to include women focuses on Marion Banzhaf, Heidi Dorow, Linda Meredith, Garance Franke-Ruta, Tracey Morgan, Maxine Wolfe and others fought to access government medical meetings, where their male activist colleagues were more welcome. Drug trails refused to include women, and even Anthony Fauci came to impasse at one meeting, where he refused to acknowledge their needs. This culminated in one of several national actions, at the Atlanta Center for Disease Control. The oft-repeated slogan in posters and leaflets: "Women Don't Get AIDS, They Just Die From It." 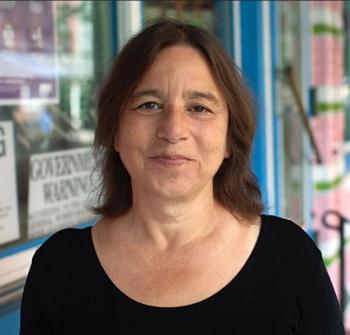 Take me to church
As more often a 'foot soldier' in the group, for me, one of the more fascinating sections of the book documents the conception and execution of large-scale actions, from the Wall Street protests to days when busloads of activists traveled to the FDA and National Institute of Health, to the CDC, and to International AIDS conferences in Montreal and San Francisco.

The October 1988 FDA protest most notably put ACT UP in the media spotlight on a global scale by also using clever media tactics. In multiple interview excerpts, Ann Northrup (a veteran TV news producer) and Chip Duckett (a book publicist and nightclub promoter), along with Michelangelo Signorile (a publicist and later OutWeek columnist and author) and others, trained the media to assign advance coverage of the national event by supporting regional homegrown chapters of ACT UP to provide a local angle. Finding a local person with AIDS and people who were planning to attend led to multiple media outlets' coverage of the protest.

In a dramatic multiple-interview account of Stop the Church, the famous protest in and outside St. Patrick's Cathedral in December 1989, key participants, including members of WHAM (Women's Health Action and Mobilization) offer their memories: Emily Nahmanson's baptism by fire, it being her first protest; Victor Mendolia's conviction in questioning the religious interference in public health policy; Michael Petrelis' impulsive decision to stand atop a pew shouting, "You're killing us!" as a hundred others (including this writer) silently lay down in the aisles. Thomas Keane recalls the moment he crumbled a holy wafer instead of taking communion. Neil Broome describes armored police boots clicking on the marble floors.

Despite the mostly negative media coverage, and discouragement by some ACT UPers afterward, Northrup said, "We were doing what we were doing to accomplish something about particular issues, and I think we did that, enormously successfully. We weren't liked, but we forced people to pay attention and forced change."

Collective contributions
While a collective, there were leaders who took on different roles. The book's 'Inspiration and Influence' section profiles author Larry Kramer, Mark Harrington who 'saw AIDS treatment as a puzzle" and co-created the spin-off TAG (Treatment Action Group), and frequent meeting facilitator Maxine Wolfe, whose life of activism helped shape the group's practical focus.

And of course, the iconic 'Silence = Death' stickers, posters, pamphlets and T-shirts are referenced and their origins traced, as designed by Gran Fury (Avram Finkelstein, Jorge Socarrás and others) who brought their graphic arts and advertising expertise to create some of the most iconic imagery of 20th-century activism. Video collectives like DIVA-TV documented protests on film and VHS tape and helped to reframe the depiction of PWAs while documenting police brutality. The arts focus culminated in the $650,000 raised at the first Art Auction, where the famous mingled with the foot soldiers.

Later in the book, personality clashes, divisions that led to TAG leaving ACT UP, and financial abuse by one member, were aspects that led to the decline in membership and focus. One of the latter yet most dramatic of protests, held in October 1992 under the Bush administration; the Ashes Action, with the cremated ashes of at least eighteen members and loved ones of ACT UP dispersed through the fence and onto the White House lawn.

Although most of the major events are shared in detail through the perspectives of multiple participants and organizers, since the book is formed by concepts, the timeline is off. Stop the Church is described before earlier (smaller yet pivotal) actions like Peter Staley and his associates' covert infiltration of the Wall Street Stock Exchange. Even the origin of the group's name is only revealed midway through in the section about art and media. However, a chronological timeline of most events is provided in one of the appendices.

Could such a vibrant movement have been sustained? Schulman ponders this as well in her eloquent summations. Her expansive account may offer insights into today's social justice movements and activism.

Some may consider this more of a scholarly or historic book. But given the current pandemic and the opposing uses of protest by Black Lives Matter versus violent pro-Trump insurrectionists, it is important that such a lengthy document shows how activism was accomplished in a now-seemingly distant analog age of fax machines and phone trees. Every person who now takes a life-saving or HIV-prevention medication owes a great deal to the vibrant, exciting, frustrating Monday night meetings where it all began.

As Schulman writes, her book "is an effort to make clear how the AIDS rebellion succeeded, and to face where it failed, in order to be more conscious and deliberate, and therefore effective, today."