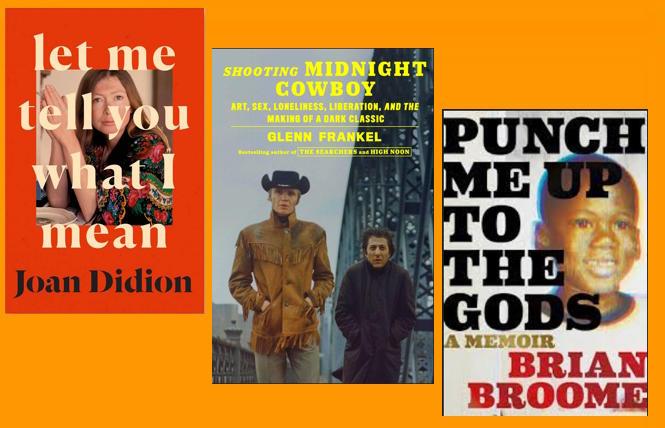 After a brutal winter, made even more difficult by the pandemic and killer storms, the Spring Equinox has arrived and warmer weather days are in sight. The following new non-fiction books are a good way to welcome the new season.

Let Me Tell You What I Mean (Knopf, 2021) by celebrated writer Joan Didion opens with a lengthy intro by gay writer Hilton Als, before delighting readers with previously uncollected essays written between 20 and 50 years ago on topics as timely as ever, including college admissions stress, addiction programs, the state of journalism, as well as one on the late gay photographer Robert Mapplethorpe, all in her sharp observational style.

Based on the novel by the late, gay writer James Leo Herlihy, the Oscar-winning 1969 movie Midnight Cowboy was groundbreaking in many ways, not the least of which was its depiction of homosexuality. Shooting Midnight Cowboy: Art, Sex, Loneliness, Liberation, and the Making of a Dark Classic (FSG, 2021) by Glenn Frankel takes a long, hard look at how it came to be and the impact that it had on the culture.

As colorful as its subject matter, and hefty, too, The Queens' English: The LGBTQIA+ Dictionary of Lingo and Colloquial Phrases (Clarkson Potter, 2021) by Chloe B. Davis has the potential to be an indispensable volume for the alphabet soup of our community, as well as for our legion of supporters and allies.

An American Covenant: A Story of Women, Mysticism and the Making of Modern America (Topple Books/Little a, 2020), the debut book by queer, Brooklyn-based writer Lucile Scott is described as "a history of mystic resistance and liberation," focusing on five women — Marie Laveau, Cora L. V. Scott, Helena Blavatsky, Zsuzsanna Budapest and Marianne Williamson — "who transcended the expected to transform America."

Prolific Danish playwright Emma Gad (1852-1921), whose "theatrical productions raised important and still pressing questions about sexuality and morality," is the subject of Laughter and Civility: The Theater of Emma Gad (University of Wisconsin Press, 2020), which combines biography, history and analysis to remind us of Gad's value. 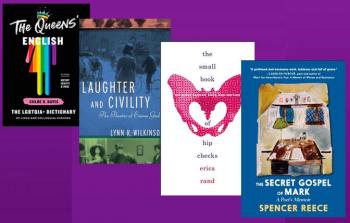 Incorporating multiple meanings of the term "hip check," from the way it's used in reference to athletes to "the inspection of racialized gender," The Small Book of Hip Checks: On Queer Gender, Race and Writing (Duke University Press, 2021) by Erica Rand, examines "the workings of queer gender, race, and writing," via familiar names including tennis legend Serena Williams, ballet dancer Misty Copeland, and figure skater Debi Thomas.

In his memoir The Secret Gospel of Mark (Seven Stories Press, 2021), gay poet Spencer Reece (The Clerk's Tale) takes readers on his journey through Yale, alcoholism, his retail job at Brooks Brothers, Harvard Divinity School, and Episcopal priesthood, and ultimately how it was poetry that saved his life.

The late gay poet James Merrill, author of The Changing Light at Sandover, as well as the memoir A Different Person, was also known as "one of the 20th century's last great letter writers," and A Whole World: Letters from James Merrill (Knopf, 2021), edited by Merrill scholars Langdon Hammer and Stephen Yenser, spans his lifetime in correspondence, from the early 1930s to the mid-1990s.

Melissa Febos, the inaugural recipient of the Jeanne Cordova Prize for Lesbian/Queer Nonfiction from Lambda Literary, returns with her new essay set Girlhood (Bloomsbury, 2021), examining "the narratives women are told about what it means to be female and what it takes to free oneself from them."

In Three Dads and a Baby (Cleis, 2021), Ian Jenkins, MD, one-third of a polyamorous throuple with his partners Alan and Jeremy, embarks on a quest for fatherhood utilizing various methods, resulting in the birth of a daughter via surrogate making them the first-ever polyamorous family to become a child's legal parents, a story you may have seen on CNN.

Award-winning gay poet, screenwriter and educator Brian Broome's coming-of-age memoir Punch Me Up to the Gods (Houghton Mifflin Harcourt, 2021) follows the author from his Ohio childhood "as a dark-skinned black boy" who harbored crushes on other boys to his journey through "indiscriminate sex and escalating drug use" to his present-day life in Pittsburgh.

Mark Stevens and Annalyn Swan, the 2005 Pulitzer Prize and National Book Critics Circle Award-winning biographers of De Kooning: An American Master, have turned their attention to the late gay figurative painter Frances Bacon with the extensive and expansive Frances Bacon Revelations (Knopf, 2021) featuring 90 illustrations within, as well as 32 full-color pages of photographs.

Where would we be without straight allies such as Olivia Laing? Laing, who has written about Andy Warhol, Derek Jarman, Kathy Acker and David Wojnarowicz, to name a few, continues in this direction with her new book Everybody: A Book About Freedom (Norton, 2021), which features Christopher Isherwood, Susan Sontag, Andrea Dworkin and others.