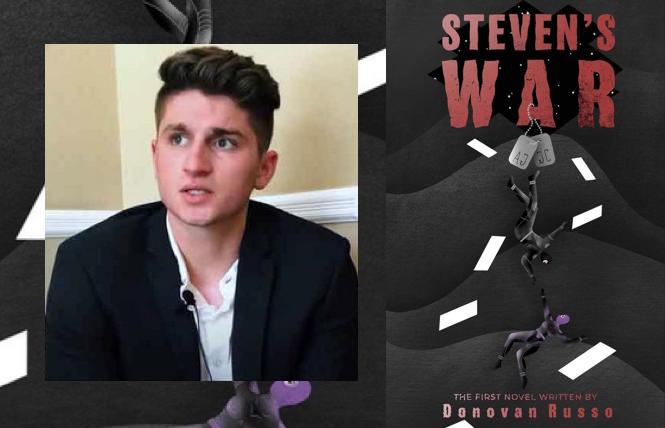 Young author Donovan Russo is a busy man. In addition to pursuing his MBA at Seton Hall University, working as a prolific media journalist for CNBC and Yahoo! Finance, and producing a short film, he is currently on the promotional bandwagon for a new action-adventure novel.

The story is solidly grounded in the poverty-stricken, desolate, heroin-addled town of Salem City where violent corrupt gangs rule with an iron fist. It's 2009 and closeted US Marine Steven Cahill is discharged from duty in Afghanistan during the "Don't Ask, Don't Tell" era after some particularly nasty battlefield trauma and forbidden nights of affectionate intermingling with fellow soldier, Anthony Johnson.

Now as a civilian, Steven is wracked with PTSD and his solitary nights are filled with nightmares of his time on the war torn battlefield in scenes Russo vividly brings to life and depicts with meticulously realistic detail.

After witnessing the desolate conditions that have morphed his town into a haven for the drug-addicted and the homeless, his personal 'war' is with those parties responsible for keeping the town stuck in such a vicious cycle of destitution.

Efforts to clean up the town bit by bit are countered by Steven's nemesis, Frank Paine, a "mysterious businessman" who claimed several restaurants, apartment buildings, and construction companies as his own version of a town monopoly.

Frank's controversial controlling tactics emerge as Steven edges closer to discovering just how deadly his motivations really are. But after a senseless tragedy befalls his troubled kid brother Jamie, he throws caution to the wind and is up to any challenge the town could throw at him with great pleasure.

His efforts to rid Salem City of arch-enemy Frank Paine and his family's evil stronghold are met with strong resistance consisting of a devilish task force (a.k.a. "Salem scum") who will stop at nothing to squash Steven and his altruistic efforts.

Eventually, Steven blossoms into an unbridled and quite fierce vigilante and in the process, decides to fully embrace his homosexuality without the fear and shame that kept him in the closet for so long.

As a unique hybrid of human superhero and LGBTQ+ fiction, the novel is more than just a classic 'good versus evil' story, it also incorporates themes of identity, belonging, coming out, masculinity, and the reinforcement of that life-affirming fight against injustice in all its myriad forms. Russo notes how he "grew up loving superheroes and wanted to give back to the incredible community of fans," and with this terrific, exhilarating debut thrill ride, he does just that.