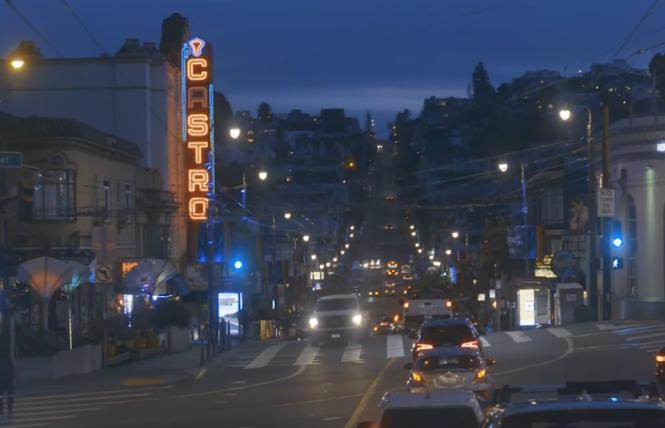 a moment from the music video for James J. Siegel's poem, "No Obits"

Under the editorship of the late Mike Salinas, August 13, 1998 marked the first issue in years that did not have any submitted obituaries. As Salinas knew, it marked a shift in the ongoing AIDS pandemic. For a moment, or at least one week, no obituaries had been submitted.

The stunning headline would be commemorated at several anniversaries, in our publication, other newspapers, and TV news shows.

James J. Siegel's eponymous poem is included in his collection, The God of San Francisco, reviewed in the B.A.R. in December 2020.

Mark William Norby wrote, "The work's final poem titled 'No Obits,' was the Bay Area Reporter's above-the-fold cover headline of the now internationally-famous issue of August 13, 1998. During that week, the B.A.R. received no obituaries due to HIV/AIDS-related illnesses, the first time since the AIDS epidemic began in the early 1980s. The headline was written by beloved past editor Mike Salinas, who died in 2003. Bone chilling to read the poem's title alone:

"Even today's news is possible. The front page fluttering
on a park bench—No Obits—as though death has quit his job,
taken a much-deserved rest.
For years the names poured in. A deluge.
The editor's inbox flooded with crisp white envelopes,
Handwritten return addresses staring back like an epitaph."

Now poet Siegel's friend Matt Jaffe has added music, and the two collaborated on a short video with Siegel reciting the poem.

The Forgotten Pandemic - Echoes of AIDS History in COVID-19
Sign up!