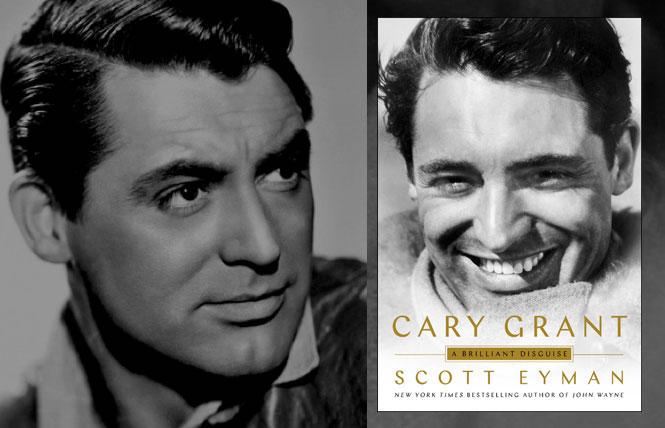 In 1999, The American Film Institute named Cary Grant the second greatest male screen legend in U.S. movie history, with only Humphrey Bogart topping him. During his lifetime he was already iconic among his peers, with Tony Curtis imitating him to woo Marilyn Monroe in the comedy classic Some Like It Hot (1959).

And Grant is still popular today, as his transcending-his-period performances seem timeless after 80+ years, despite his last film being released in 1966, and having died almost 35 years ago. Local SF/British film critic David Thomson considers Grant the most important actor in cinema history.

All these accolades are no surprise to his latest biographer, former literary critic Scott Eyman, chronicler of other Hollywood luminaries such as John Wayne, Cecil B. DeMille, John Ford, Henry Fonda and James Stewart. Eyman felt enough time had passed to reassess Grant the man and his career before many of the people who knew him died.

For Eyman, Grant was the most self-invented man in the movies. 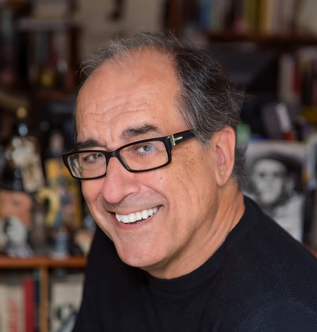 "He's a completely made-up character and I'm playing a part," Grant would explain. "It's a part I've been playing a long time, but no way am I really Cary Grant. A friend told me once, 'I always wanted to be Cary Grant.' And I said, 'So did I.'"

How small-town Brit Archie Leach became Cary Grant and how Grant finally assimilated that identity towards the end of his life, is the core of Eyman's comprehensive, dense, meticulously researched/well-sourced, and probably definitive biography.

Grant was born Archibald ("Archie") Leach in 1904 Bristol England to an often unemployed alcoholic father and smothering emotionally unstable mother. He grew up poor and unhappy.

Leach's father committed his wife to an insane asylum when Archie was 11, telling him she had died. He wouldn't discover the truth until after he became a movie star, buying a Bristol home for her, but she remained a source of emotional distress to him until she died in 1973. These traumatic childhood experiences would cripple his ability to form close relationships and left him something of a loner most of his life.

Leach found refuge in English musical halls (their version of vaudeville) with his dashing good looks opening doors for his appearances in revues, which helped him develop his impeccable comic timing. Physically agile, he performed in an acrobatic troupe and when they toured in America, he decided to stay and start a new life.

He settled in Greenwich Village, pursuing stilt walking for money and comic sketches to develop his talent. His roommate was the future Hollywood costume designer, the openly gay Orrey-Kelly. Leach would sell Kelly's painted neckties on the streets to support themselves. He wound up performing in musicals, with Hollywood eventually calling in the form of Paramount giving him a studio contract after a successful screen test.

Hollywood beckons
He made his first films in 1932, but it wasn't until Mae West chose him as her leading man in the 1933 movies, She Done Him Wrong and I'm No Angel, that his star began to rise. Yet not until the late 1930s with his performances in the screwball comedies, The Awful Truth, Bringing Up Baby, Holiday, His Gal Friday, My Favorite Wife, and The Philadelphia Story, did the persona that came to be Cary Grant (he had changed his name in 1931, with Cary, a character he played in a musical, and Grant, out of a list of generic surnames) was firmly established. Actresses adored working with him, as he treated them as intelligent co-equal partners and not as sex objects.

He starred in the adventure Gunga Din, gave a few excellent dramatic performances in Only Angels Have Wings, Penny Serenade, and None But the Lonely Heart, the latter two resulting in his only two Oscar nominations for Best Actor; he eventually received a career Honorary Oscar in 1970.

Suspense director Alfred Hitchcock showcased his darker side in Suspicion, Notorious, To Catch a Thief, and North by Northwest. Most of his filmography were (romantic) comedies (i.e. The Bishop's Wife, An Affair to Remember, Charade). He probably rightly intuited that his audience didn't want to see him as glum negative characters, so he passed on juicy roles in A Star Is Born and Lolita.

Cary Grant became the epitome of debonair detached wit, elegant style, suavity, sophisticated charm, and the winning embodiment of savoir fare. Eyman observes that Grant was to romantic comedy what Fred Astaire was to dance. He made something that is extremely difficult look easy.

Leaving Leach
After Grant retired, as an astute shrewd businessman working with Faberge and MGM Films/Hotels, he became very wealthy. He died of a stroke in 1986 at age 82 while touring his one-man remembrance show, A Conversation with Cary Grant in Davenport, Iowa.

Grant had deep insecurities, with feelings of inadequacy and a fear of abandonment, as well as being discovered a fraud or imposter. Plagued by perpetual anxiety, especially with regards to acting, he suffered depressions and attempted suicide at least once. Above all, he wanted to leave behind Archie Leach and his painful past.

He married five times, with four divorces. Only his brief last marriage at age 77 was a happy one, and he doted on his daughter Jennifer, whose mother was wife number four, actress Dyan Cannon. He would pursue women with an almost feverish intensity (he had many affairs, the most famous being with married actress Sophia Loren) but then would withdraw, driving them away before he could be rejected, joking that he was a better judge of scripts than wives.

Due to his early poverty, he was one of Hollywood's infamous cheapskates, never picking up a check in a restaurant and billing houseguests for laundry and other incidentals (i.e. Katharine Hepburn sent him a check for $1.81 to pay for a phone call), though Eyman notes he could be generous to friends, for example virtually supporting playwright Clifford Odets in his final years.

Therapy and over 100 LSD sessions, which he began to use in the late 1950s/early '60s when it was still legal, brought him some peace of mind in his final years, though one could hardly call him a happy person and even acting rarely brought any contentment. 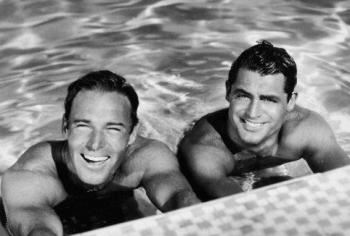 Man's man
And finally there is the complex question of Grant's sexuality, of particular interest to our readers. Long before his death, there were rumors that Grant was gay. In the last few decades, incidental evidence has emerged to support that contention with qualifications. Orrey-Kelly, in an unpublished autobiography discovered decades after his 1964 death, profiles an on-and-off again volatile relationship with Grant.

Then there are the provocative photos of Grant with his periodic roommate Randolph Scott (in between their short-term marriages), which today would suggest a domicile gay couple that even in the 1930s raised eyebrows. However, Eyman insists the photos were a publicity stunt engineered by Paramount to promote two of its up-and-coming stars.

Most of these shots were taken by the gay photographer Jerome Zerbe, who later alleged he had sex with both men. Zerbe was intent on avoiding the typical glamour-based pictures for more spontaneous candid images, unintentionally exposing an intimacy neither participant would have wanted made public.

Also, Eyman spoke with Scott's son, who disavows any sexual relationship his father had with Grant, as does Jennifer Grant. In her memoir, she claims Grant didn't mind being called gay as it made women want to prove the allegation wrong.

However, Grant did mind when comedian Chevy Chase called him gay in a 1980 TV interview, suing him in court and winning, with Chase later apologizing for his comment. All Grant's wives, especially Betsy Drake (#3), attest to Grant's sexual prowess in the bedroom.

Eyman does include a conversation he had with Bill Royce, a later friend of Grant, saying that Grant once implied that he had been basically gay as a young man, later bisexual, then finally just straight. "Randy Scott had seen their relationship as 'locker-room playing around.'

"Grant explained sexuality in terms of performance, of acting. He told Royce that not to explore completely one's sexuality would be like an actor playing only one character for life. Everybody, he said, had more than one character inside them. He didn't think homosexual acts were anything to be ashamed of or proud of, they were part of the journey, not necessarily the final destination."

Royce asserts, "My sense of it was that he found homosexual life unrewarding. As he got older, he wanted children, and he didn't think he had any chance at a child as long as he was living that life." Royce's words have a ring of truth to them, which is why they are quoted in depth here.

All these conflicting corroborations lead the straight Eyman to this nuanced conclusion: "There is plausible evidence to place him inside any sexual box you want: gay, bi, straight, or any combination that might be expected from a solitary street kid with a street kid's sense of expedience."

It would be fascinating what an LGBTQ biographer might conclude looking at all the contradictory claims, though it is clear that while Grant probably did participate in gay sex notably in his youth, Grant would never have identified himself as gay, then or now if he were still alive.

Movie stars have indefinable qualities that attract us almost at an unconscious level, so by their very nature they remain elusive. In this sense, Cary Grant might be the quintessential movie star. Eyman does an outstanding job of highlighting the many inconsistencies of Grant's life, especially that this glamorous international celebrity spent his last day in small-town Davenport, Iowa.

Eyman is empathetic but critical, despite all the mind-numbing minutia of Grant's films in the middle section, which will be a bit of a slough for all but diehard fans of old Hollywood.

Yet Grant remains a mystery. The biography's subtitle, A Brilliant Disguise, may be perhaps the best summation of both his personal and professional life. Ultimately, Grant's legacy will always be his films still delighting new audiences today. Despite his genius for self-invention, the real Cary Grant will most likely be found on celluloid.