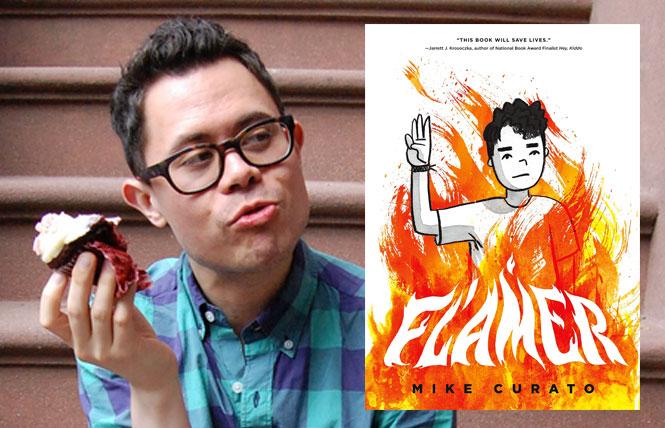 Mike Curato, an award-winning author and talented artist, has produced Flamer, young adult graphic novel about a young man on the verge, and it's a searing, intensive portrait that stays with the reader long after the book is finished.

At the story's core is the struggle of a youth to embrace his burgeoning gay identity and accepting it amidst all the slings and arrows of early teenaged life. It's the kind of literary adventure that tells an engrossing story rooted in reality, but also one that teaches an important lesson along the way. 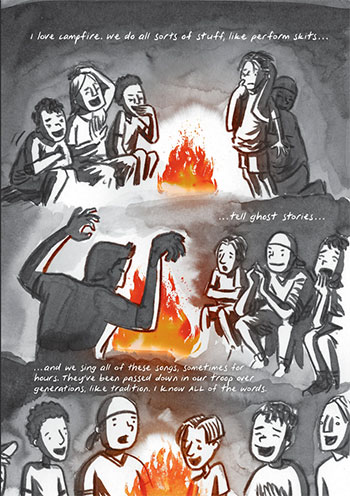 A page from 'Flamer'

Flamer draws from Curato's own personal experiences in the Boy Scouts as a closeted kid. It follows Aiden Navarro, a fourteen-year-old biracial Filipino-American boy internally vexed and outwardly bullied by his short stature, portly body, effeminate voice, and, perhaps, worst of all, the insinuation by other boys that he's gay. He's hoping a summer spent at Boy Scout camp with his peers in the woods will work wonders for both his image and his future.

When the story begins, Aiden is about to finally take the great leap from Catholic middle school to public high school in two weeks, but the thought terrifies him. So all of the other boys' dick jokes, silly shower stall banter, rantings about girl trouble, racist jabs, and "nondenominational" camp church services form mere distractions from the harsh reality of four long years stuck in a high school that could be disastrous.

Aiden's troupe, the Flaming Arrow patrol, depends heavily on his impressive cooking skills to get them through the day, while Aiden is just grateful to be in the beautiful woods and away from his perpetually angry father, whose cruel outbursts and threats of violence have taken a toll on their mother's mental health.

Letters from his best gal pal Violet (based on Curato's own real-life best friend Lara) tempers all the stress of communal showering and toxic masculinity and messy tent meetings, not to mention some nagging same-sex feelings for his close pal Elias.

Curato taps into all of the insecurities, doubts, and panicky thoughts and questions racing through a teenager's mind as Aiden battles his inner demons and attempts to come to terms with feelings he's always believed to be unnatural, sinful, weird, and bad.

Aiden's journey is artistically rendered by Curato with strategically-placed dabs of color and brilliantly resonating dialogue that can be as emotional as it is jarring to read. It's a thought-provoking journey of queer self-discovery that's an immense joy to read and an even more pleasurable dive into nostalgia for those readers of a certain age who remember how tough growing up queer really is.

At well over 300 pages, Curato has created a debut novel-length graphic world to escape into as the adventures of Aiden ultimately coalesce into an emotionally-charged story of friendship, heartbreak, longing, isolation, despair, hope, and, finally, acceptance.

Cole Escola: Get 'Stuck' on the funny gay comic 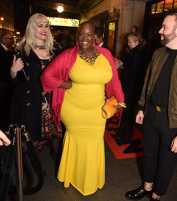