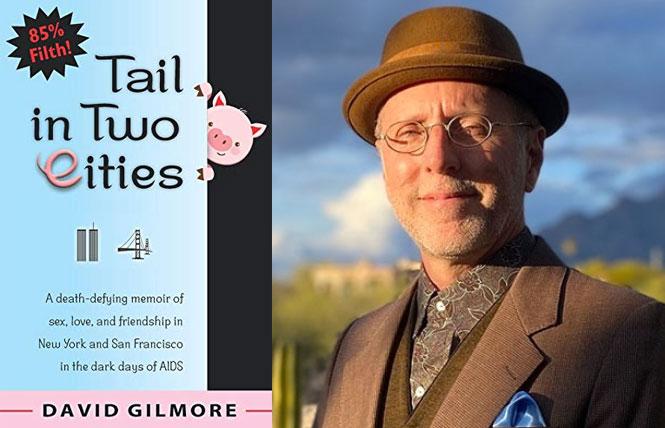 When the cover of a book proclaims the story contained inside is "85% Filth!", bookstore browsers scouring for some good smut can only hope that the promise comes true. But Tucson, Arizona author David Gilmore, who is also a photographer, filmmaker, and former radio show host, offers more than just dirty sex stories in his latest book, Tail in Two Cities.

The memoir begins in New York City way back in 1985, the dark, early years of the AIDS crisis, when gay men began their panicked scrambling to doctor's offices and testing clinics to receive either a death sentence or divine absolution. Gilmore was just 21 then and arrived fresh off the plane from a "sexually chaste" rural southwestern Florida upbringing.

It was a radically different time to be alive: devoid of cell phones, hook-up apps, and Internet; most social interactions and gay cruising were initiated in person, outside of the popular 976 phone sex chat lines. Still, Gilmore, a young man resistant to the new AIDS-era rules for sex ("limit it, bag it, or just say no"), proceeded despite shuttered bathhouses, and writes that he considers the timing of his arrival in Manhattan to be miraculous and also partially responsible for his survival today.

Public sex in the bushes of Central Park's Ramble is "immediate and animal," trips to Fire Island's Meat Rack are awash in overstuffed Speedos encasing "biscuitaceous" butts, and humid Provincetown summers spent in circle jerks beneath the piers all lead to friendship with a man from the Bay Area which inspired a cross-country road trip and a twelve-year love affair with San Francisco.

"There was both an air of festivity and death in the Castro in the eighties," writes Gilmore, who describes San Francisco gay culture impeccably and his portrayal of the bars, the clubs, the general populace, and the issues facing it, leaps off the page. His personal losses to AIDS are devastating, including a very humbling and sobering chapter when he says goodbye to a friend barely clinging to life at the original location of Maitri Hospice on Hartford Street.

There are also frequent and cleverly introspective interludes of advice and opinion, and fascinating asides on mastering the fine art of bottoming, how to determine if you're a safe sex top, the eroticism of a man's navel and armpits, and public toilet sex. These meanderings are so interesting and brazen, they deserve their own advice handbook.

This carnal autobiographical tour-de-force will definitely appeal most to readers of a certain age who were actually there in the 1980s an '90s, when all of Gilmore's raunchy escapades took place. His sexy impressive tribute will resonate especially with nostalgic San Franciscans who still remember the good old days of "late-night jaunts to the parks and dungeons" where they found, as Gilmore did, "meaning, sometimes profound meaning."