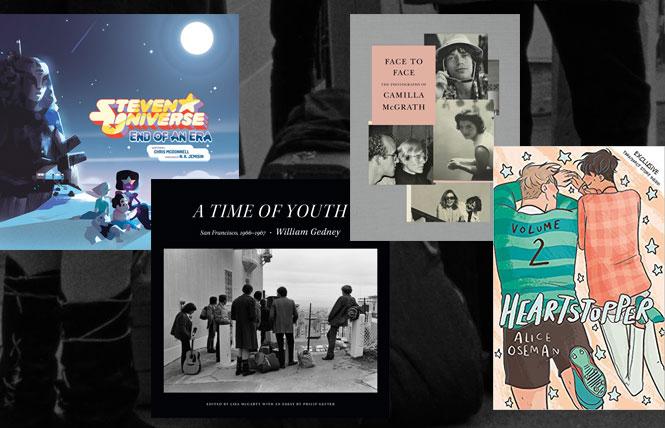 To some, 2020 is dragging on like an endless nightmare, between the election and the pandemic. To others, it's flying by, especially since folks feel like they're in limbo, due to the election and the pandemic. Nevertheless, the holiday season will soon be upon us, whether or not we are prepared. Thankfully, books are affordable gifts that can be enjoyed in the safety of the recipients' homes. They are also suitable means of escape while we wait for 2020 to end.

For the visually inclined
Steven Universe: End of an Era (Abrams, 2020) by Chris McDonnell with a foreword by N.K. Jemisin is a colorful tribute to the groundbreaking Cartoon Network show created by Rebecca Sugar which ran for five seasons, featuring all-female superheroes and including the first same-sex marriage in an all-ages animated series.

The late queer photographer William Gedney, who died from AIDS complications in 1989, was notable for his rural Kentucky and gay Pride parade photographs, as well as those of the hippies in San Francisco. A Time of Youth: San Francisco, 1966-1967 (due out in Feb. 2021, but can be pre-ordered from your favorite indie bookseller) focuses on a specific time frame of his work.

There's much to recommend about Face to Face: The Photographs of Camilla McGrath (Knopf, 2020) by Andrea di Robilant. It's a beautiful coffee table book that makes good use of the coffee table you've been spending so much time with during the pandemic. A celebration of the late countess and socialite McGrath's personal photographic archives, it features a multitude of LGBTQ faces including Keith Haring, Andy Warhol, Jann Wenner, Leonard Bernstein, Allen Ginsberg, Fran Lebowitz, Annie Leibovitz, Cy Twombly, Robert Rauschenberg, Andre Leon Talley, John Waters, David Hockney and William Burroughs.

Heartstopper, Volume 2 (Scholastic Graphix, 2020) by Alice Oseman is the second installment (obviously!) in the graphic novel series about "shy and softhearted" Charlie who falls for best friend/schoolmate/rugby player Nick, and is surprised to find that Nick feels the same way. Now if they can only convince their friends that it's all going to work out fine. 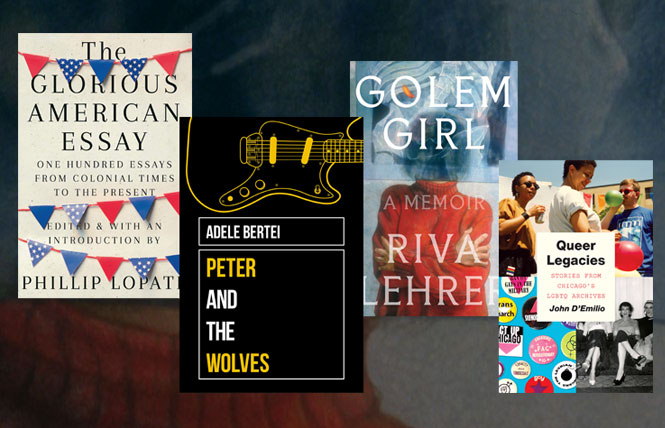 If there was a queer Cleveland answer to Patti Smith, it would have to be Adele Bertei, who tells her fascinating story in Peter and the Wolves (Smog Veil, 2020). Not only did Bertei also have a close friendship with a photographer (in her case, the legendary Nan Goldin), but she was also part of an influential music scene along with the late (and relatively unsung) Peter Laughner (the book's titular Peter of Pere Ubu fame). Additionally, Bertei not only continued to make her own musical mark, but she can also be seen in classic `80s films such as Lizzie Borden's Born in Flames and Susan Seidelman's Desperately Seeking Susan.

A fantastic combination of memoir and visual art, Golem Girl (One World, 2020) is by Riva Lehrer, born in 1958 with spina bifida. Known for her artistic representations of "people with impairments, and those whose sexuality and gender identity" has been marginalized, Combining vintage and personal photographs, as well as Lehrer's artwork, with the artist's story in her own words, makes for an unforgettable experience.

Making good use of the resources at Gerber/Hart Library and Archives (where he is currently board president), gay historian, educator, writer and activist John D'Emilio's new book Queer Legacies: Stories From Chicago's LGBTQ Archives (The University of Chicago Press, 2020) aims a spotlight on the city by the lake. As D'Emilio writes, "Most of the stories have a Chicago focus, a city often ignored in the broad narrative of LGBTQ history." 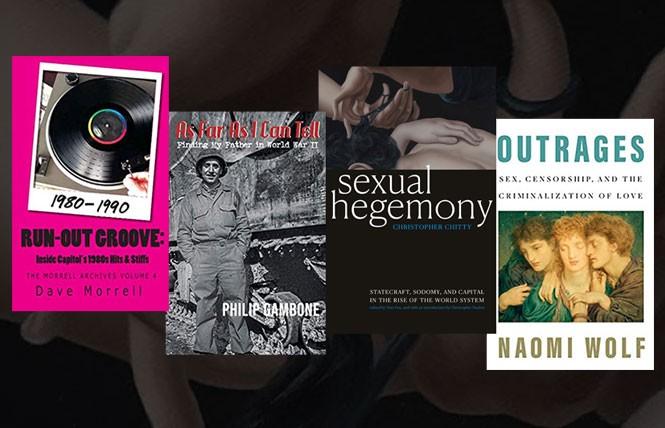 During the period covered in Dave Morrell's latest music memoir Run-Out Groove: Inside Capitol's 1980s Hits & Stiffs (davemorell.wordpress.com, 2020), the legendary Capitol Records label had a few gay acts on its roster, including Pet Shop Boys, Marc Almond, Dave Koz, Queen (Freddie Mercury) and Katrina and the Waves (Katrina Leskanich came out later), as well as numerous acts with a gay following such as Duran Duran and Tina Turner (both of whom get mentioned).

With advance praise from heavy hitters such as Barney Frank, Andrew Holleran and Paul Lisicky, As Far As I Can Tell: Finding My Father in World War II (Rattling Good Yarns, 2020), the powerful memoir by Philip Gambone (author of The Language We Use Up Here and Beijing), details his soldier father Arthur's military odyssey during the second world war.

Tracing the 500-year history of "capitalist sexual relations," Sexual Hegemony: Statecraft, Sodomy, and Capital in the Rise of the World System (Duke, 2020), Christopher Chitty writes about the "politicization of male homosexuality" in European cities between the 17th and 19th centuries and on through the 20th century in New York City.

Controversy seems to follow notorious third-wave feminist Dr. Naomi Wolf wherever she goes, and her latest book Outrages: Sex, Censorship and the Criminalization of Love (Chelsea Green, 2020) is no exception. Newly updated (read: corrected) and expanded, the book follows the story of gay Victorian-era poet, biographer, and critic John Addington Symonds, from trauma to triumph. 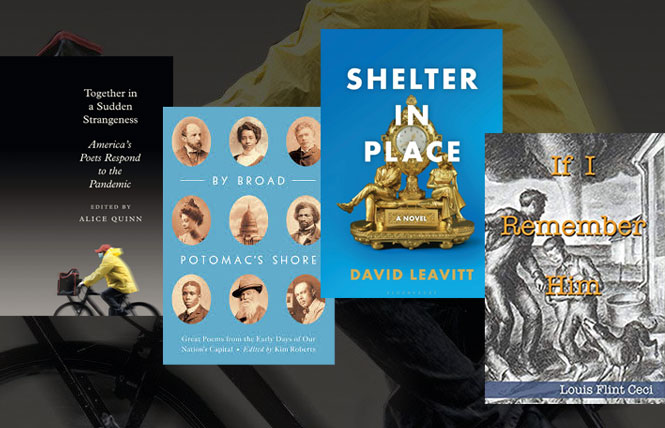 For cravers of creative writing
Together in a Sudden Strangeness: America's Poets Respond to the Pandemic (Knopf, 2020), edited by Alice Quinn, the executive director of the Poetry Society of America and former poetry editor at The New Yorker, is an anthology comprised of the work of more than 100 poets, including LGBTQ+ voices such as Jericho Brown, Ellen Bass, Richie Hofmann, Eileen Myles, Carl Phillips, Rigoberto Gonzalez, Mark Wunderlich and Rick Barot.

Compared to New York, San Francisco or Chicago, Washington DC might not be among the first places the average person thinks of when it comes to poetry. Queer poet, historian and educator Kim Roberts is changing that with her new anthology, By Broad Potomac's Shore: Great Poets from the Early Days of the Nation's Capital (University of Virginia Press, 2020), featuring 132 poets, including a substantial portion of whom were queer, resulting in an indispensable collection honoring and celebrating a too often overlooked literary hub, one that is finally getting its chance to shine like a beacon.

Written before the COVID-19 pandemic and published before Donald Trump was trounced at the polls, David Leavitt's thoroughly modern comedy of manners, Shelter in Place (Bloomsbury, 2020), his first novel in seven years, is both one of the best novels of the year as well as the most humorous, set in the aftermath of the 2016 presidential election.

I Wish My Father (Headmistress Press, 2021) by Lesléa Newman (best known as the author of Heather Has Two Mommies) reads like a memoir in poetic form, comprised of 28 poems, each consisting of three-line stanzas, detailing the time leading up to the end of Newman's father Edward's life in 2017. The poems are a moving blend of the tragedy and comedy that comes with dealing with the elderly. (Due out in Jan. 2021, but can be pre-ordered from your favorite indie bookseller.)

Part of The Croy Cycle of books set in Croy, Oklahoma, If I Remember Him (Le Croyens Press, 2020) by gay writer Louis Flint Ceci takes readers back to the mid-20th century for the story of Lerner Alquist's quest to memorialize his wife in the town suffering as much from weather damage as it is from racial and religious bigotry.