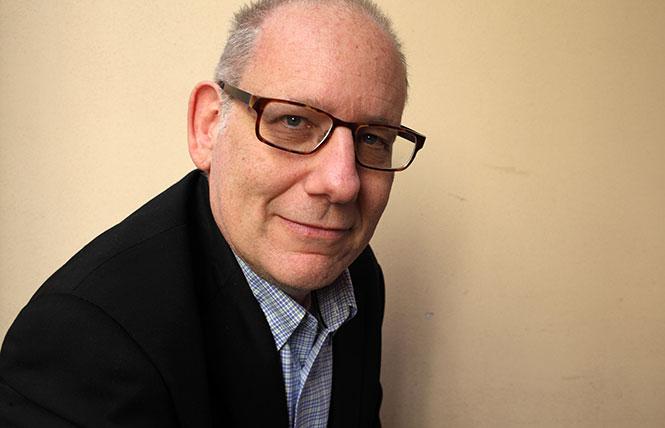 Now, more than ever, we need a reason to laugh. Fortunately, celebrated writer David Leavitt has returned with his first novel in seven years. A thoroughly modern comedy of manners, Shelter in Place (Bloomsbury, 2020) is both one of the best novels of the year as well as the most humorous.

Set in the aftermath of the 2016 presidential election, Leavitt introduces us to his fabulous and expansive cast of characters, including husband and wife Eva and Bruce, Eva's best gal-pal Min, interior decorator Jake, Eva and Bruce's antagonistic neighbor Alec, Bruce's secretary Kathy and Jake's mentor Pablo, just to mention a few.

Eva and Bruce are the novel's nucleus, around which the other characters revolve. She is so desperate to get away following the crushing disappointment of the election that she is willing to leave the country for Venice. Bruce, a financial mastermind, is willing to do anything to keep her happy. Leavitt, recovering from an unexpected hospitalization for an appendectomy, was generous enough to take time out of his convalescence to answer a few questions about the book.

Gregg Shapiro: Did you know when you first started writing your new novel Shelter in Place that it would take such a humorous direction?

David Leavitt: Various people have told me they have found it really funny. I think it's revealing of me that I thought of it as a comedy, but I never realized it was actually funny. I was actually happy to hear that.

I'm glad you said that because I've been describing Shelter in Place to people as a 21st-century comedy of manners on par with predecessors such as Noel Coward and Joe Keenan.

Oh, Joe Keenan! I'm so glad you mentioned him. I loved those books. He wrote those great novels Puttin' On the Ritz and Blue Heaven. I always remember the detail of the porn actor wearing like six pairs of underwear at a time. They were among the funniest books I have read. Then when he went to the dark side — Hollywood -- and he was writing for Frasier, I had a little bit of correspondence with him in which I think I said that I hoped he would write more books. It's so funny that you mentioned him. Noel Coward was absolutely was on my mind, but I must have had Joe Keenan in my subconscious. You're a very good reader! I had not put that together. 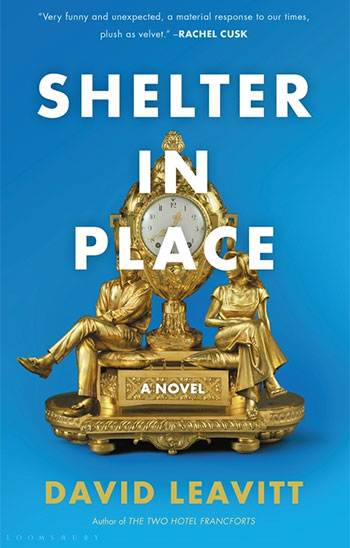 The title of book is both inspired and timely. Did it come before or after the pandemic?

It came in November. I cannot claim credit for it. We had been having a very hard time with the title and it was my editor, Anton Mueller at Bloomsbury. He and I were having a lot of conversations about the fact that all the titles I was coming up with had to do with time. We both felt that the title needed to be about place. One day he called me up and said, "I have an idea for a title. I don't know what you're going to think of it," and he said 'Shelter In Place.'

At that point, back in November I associated that with earthquake drills. I loved it and I thought it was a great title. There was a little bit of hesitancy on the part of the marketing people — this is hilarious — that readers would not be familiar enough with the phrase. Little did any of us even begin to know. I think it was a bit of prescience, not on my part, on his part.

Dialogue is also represented by text in the book, and there is a hilarious three-way text conversation that takes place between Jake, whom you mentioned, and another character named Min. Was it as much fun to write as it is to read?

That, particularly, was fun. I worked a long time on the conversation between Jake and his British online paramour. I started chronically mis-sending texts because I would send them to whatever name happened to be at the top on my text app on my computer. I would send a text that was meant for, say Mark, my husband, to one of my colleagues. I didn't get into any trouble. I didn't say anything I shouldn't have. But I sent things that were utterly mystifying. So, when I added Min into that conversation, that was the funniest part. Everyone was getting a text that was meant for someone else. That was fun.

You said something earlier about being a magazine reader, and magazine publishing is sweetly skewered in the book, never more so than when Min begins a sentence "When I was at Mademoiselle ..." or "When I was at Town & Country..." Do you think magazine readers are affected by the revolving door of writers and editors?

The only magazines I subscribe to, aside from the London Review of Books, which is the outlier, are Architectural Digest, A.D. as it's now called, and I get The World of Interiors and British House and Garden. I have been comparing, every month, the size of the issues. Britain still has a thriving print magazine industry as evidenced by the fact that their issues remain pretty thick. If you look at Architectural Digest, the most recent issues, they are like 50 pages.

It's that thin now?

They're so thin! All the priority at Conde Nast, from what I'm being told, is being shifted to the websites and the online material. I think the print magazine, even in areas where beautiful images are very important, is a dying medium in the United States. Maybe it'll revive. I think it's very sad that that's happening. But at the same time I think there is a real ferocious belief in print. I agree with that.

Now that Netflix has the power to pull movies or episodes of shows (out of rotation), I'm grateful that I have my old DVDs. I can imagine a future where if everything is electronic there's no permanent record that can be consulted, like in an archive. Also, it's just a reflection of my own experience. I know so many Mins. It seems to me, in the magazine industry, particularly when it was doing better, nobody ever kept a job for very long.

Inevitably, when a magazine got a new editor, if you paid attention to the masthead you would see, "Oh, that was the former editor of "X". I think editors determine the tone or the voice of the magazine. One reason I think "The New Yorker" is the exception to the rule is because it's had so few editors. David Remnick's been there forever, so there's a certain consistency. Whether it's good or not is another question, but at least it's consistent.

Dogs are also very much a part of the cast of characters; Bruce and Eva's Bedlington terriers Caspar, Isabel and Ralphie, and Alec's Sparky. Do you consider yourself to be a dog person?
Oh, totally. I have a Bedlington terrier. I only have one! But those three dogs are based on my dog who is the same breed. I don't ever want to write another novel that does not have a dog in it.

Writers also don't escape the wrath of some of the characters. Does Lydia Davis know she's a character in the book?

I haven't told her. I don't know her very well. That reading was actually based on a reading by my friend Rachel Cusk that was at Greenlight Books. I attended that reading, so a lot of the detail for that scene came from Rachel's reading. But I have heard Lydia read.

I suppose what I was mostly interested in doing there was sending some nonliterary people to hear a sort of super-literary, super-refined writer whose audience is almost exclusively other writers. The idea of having someone like Bruce, who doesn't really know very much, hearing Lydia Davis, seemed to me to have a lot of comic potential.

One of my favorite lines is Bruce's description of her stories being like things you hear people saying into their cell phones on the subway. That was an opportunity for me to create some comedy. At the same time, I don't think there's anything in it that Lydia would be offended by.

You incorporate the topic of AIDS in the novel in the subtlest of ways, and yet it's probably something to which many gay readers, especially those of a certain age, will appreciate.

My brain works in strange ways. I knew that there had to be a reason why Jake was reluctant to go back to Venice. I had an earlier version in which it was not Venice but Paris and he was trying to avoid going back because his parents had been refugees. It just got way out of control.

I taught a class last fall (2019) with 49 freshmen called Politics and The Arts. We did a whole section on AIDS, Film and Literature. We watched one of my absolute favorite movies, Parting Glances. We watched that and we read Susan Sontag's "The Way We Live Now" and some David Wojnarowicz. We looked at art and talked about ACT UP. My T.A., who is himself very young, 23, but very knowledgeable. He's basically a 50-year-old man in a 23-year-old's body. He said, "(For) a lot of these kids, especially the gay ones, AIDS is like ancient history. They don't know anything about it."

I really did want to give them a sense of what that period had felt like. In retrospect, I'm glad that I did, because I think there are a lot of useful lessons to be learned about COVID. The book I'm starting now, which is a sort of a sequel to this one, begins right at the beginning of COVID. I want to talk about how living through AIDS in some ways affects how you cope with COVID. I remember in the very early days (of AIDS) that there was, particularly on the part of older, activist gay men, a real resistance to condoms on the grounds that they took away their personal freedom. That's not unlike the argument that some of the anti-mask people are using.

Shelter in Place is extremely cinematic. If there was a movie version, who would you like to see as Jake, Eva, Bruce and Min?

Oddly enough for me, I haven't thought about it that much. Off the top of my head, I'm thinking Nicole Kidman could be a good Eva. But I really do need to think about that. It's funny, because I usually cast my novels, but I haven't with this one. That will be something for me to do during my convalescence.

For many authors, book tours appear to be on hold for the near future. Do you have plans for virtual events?

I'm doing a number of them. They haven't been scheduled yet. I know I'm doing one at Square Books in Oxford, Mississippi. I'm doing one at a bookstore in San Francisco and one in Saint Paul. There should be more, including one in New York, as we continue. I keep meaning to put it on my own website, but it was one of the many things that I was completely waylaid from doing by this unexpected descent into the weirdness of hospitals in the age of COVID.