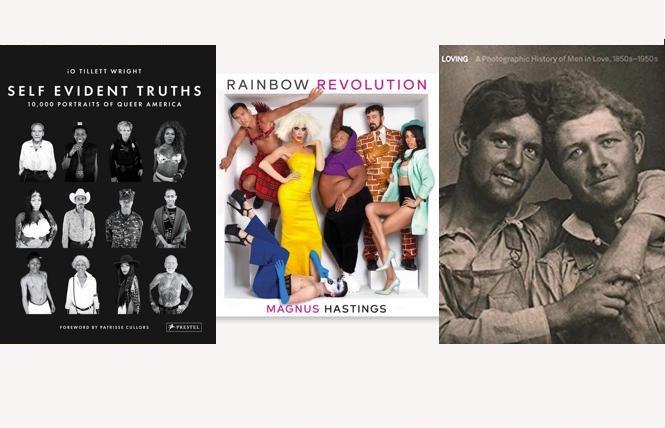 Three new photo books visualize queer lives from the past and present day in uniquely different ways. Rainbow Revolution, Loving: A Photographic History of Men in Love 1850s-1950s, and Self Evident Truths: 10,000 Portraits of Queer America each deserve a special place in your art book collection.

Self Evidence
Although a first look portrays a somber tone with its all-black-and-white imagery, iO Tillett Wright's's expansive series of portraits, Self Evident Truths: 10,000 Portraits of Queer America, shot at many Pride events and other gatherings around the country over several years, reveals a mirthful sense of self-regard among most of the thousands of subjects in the photographer's remarkable book. 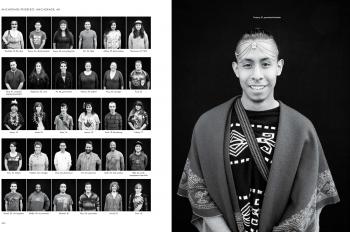 The results of Wright's ten-year journey —across 90 cities in the United States to photograph 10,000 people who identify as queer— showcases the full spectrum of sexuality and gender with an inclusive approach in the representation of race, ethnicity, age, profession, and class. Famous folk like Margaret Cho, Sarah Paulson, U.S. Senator Tammy Baldwin are paired with First Nation Midwesterners, nurses, truckers and doctors.

With a black backdrop used for each portrait, Wright pays homage to photographers Irving Penn, Richard Avedon, Nan Goldin and others. A darker inspiration is that of Nhem En, a teenager forced to photograph 14,000 people in Cambodia who were executed by the Khmer Rouge. Wright's focus both references LGBTQ oppression, while highlighting our present up-front out status as an undeniably strong and diverse community.

Loving it
Called "a love letter to the world, a powerful depiction of love between two people" by its co-authors, Loving: A Photographic History of Men in Love, 1850-1950 is already being lauded weeks before its mid-October release. While not the first book of collected vintage male images of same-sex affection, it's possibly the largest (11.02 x 1.26 x 8.82 inches), and includes 300 never-before-seen photos.

Native Texans, collectors Hugh Nini and Neal Treadwell are arts professionals currently living in New York City, and are also a married couple. The two have a decades-long hobby of scouring garage sales and estate auctions for vintage same-sex images from the past. Their collection has grown over a period of 20 years to include over 2700 images. And now it's a book with 300 of the best photos chosen for publication.

"Our collection reveals to the world, and even to us, for the first time and voluminously, that feelings of love, attachment, or longing between two people are the same—regardless of the gender make-up of the couple. Their images evoke as powerful a sense of love and humanity as has ever been filmed, or written about, or acted out on a stage.

"They appear in many varied contexts that repeat across time and global geography. They pose together in the bow of a boat, on a tree branch, on a bicycle, at the beach, in a forest, leaning against a car, and even in, or on, a bed. From a social perspective, the range is extensive as the images reflect back nineteenth-century working class figures, fashionably dressed businessmen, university students, and soldiers and sailors of all ages." 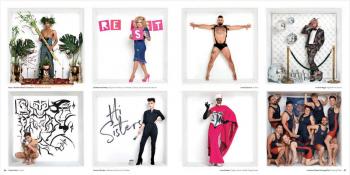 Despite its focus toward the famous, the collection still embraces diversity. The photo series "celebrates pride, embraces identity, and elevates the individual," as quoted in the press statement. "Additionally, some portraits include personal essays. From drag queens to school teachers, pop stars to lawyers, Rainbow Revolution spotlights the colorful spectrum of queerness."

With a November 24 release, this and the other two books will make a perfect holiday gift for a loved one, or for yourself.