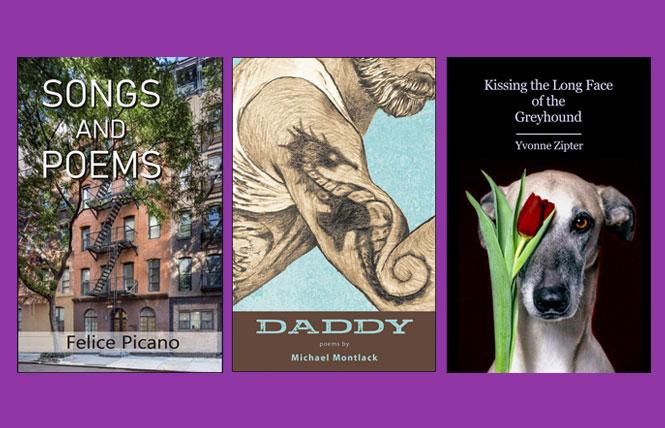 As the pandemic wanes onward, we've cast our best-laid summer vacation plans to the winds in favor of #BLM face masks and mega-sized bottles of hand sanitizer wondering what will become of the holidays and the new year on the horizon.

Never fear, fair readers: there is new LGBTQ poetry available to distract and delight your senses and tickle your literary fancies.

Starting off with veteran author and seasoned poet Felice Picano, whose slim new book, Songs and Poems, his first since 1977's The Deformity Lover and Other Poems, features both older poems and more recent works, equally masterful and memorable.

Divided into two sections, Early and Later, the former section begins with a sonnet about what constitutes love and friendship and the difference between straight men who "turn encounters into wives," and the author's vision of eschewing the "dream affair" for the reliable loving friend who is always there. The section concludes with a longer formed piece, which Picano admits to working on for years, titled "In Memoriam, Wystan Hugh Auden, 1973" and celebrates the life of the celebrated poet.

The second section features Picano's newer works which have predominantly appeared in quarterlies and magazines, like the longest work "Window Elegies," which garnered an award from the Poetry Society of America. From the addictive quality of the girls of New Orleans to the unspoken secrets of a Las Vegas tryst, Picano work is expressive and moving within an economy of words.

The newest poem, "My Mother's Life," appears here in all its descriptive splendor for the first time as well. The title is fitting as these verses are meant to be either read aloud or belted out in song, even set to background music. This is brilliant work from a reliable writer who never disappoints.

The title of poet Michael Montlack's new poetry collection speaks for itself. In his book Daddy, his second collection after Cool Limbo, we find an orgasmic mixture of masculinity, family, identity, adoption, sex, desire, and mortality. His writing is sensual and exacting, drawing out the true ephemeral nature of a fleeting glance, a memory, a musky scent, a personality from Fire Island or a gay-men owned Vermont nature conclave where nudity reigns around the watering hole with hundreds of frolicking men.

The "world-weary nonchalance" Montlack calls "Dickorum" represents a shedding of one's innocence and shock felt at a public sex act or "that manic spandex-clad drag queen whose tuck came undone during her first number" or a boss messaging you on Grindr "to ask if the monthly budget analysis is done...before he compliments your cockshot."

Montlack excels with a palpable sense of humanity and sexuality in this poetry collection standout.

With its remarkable cover art and passionate phrasing, Chicago author Yvonne Zipter's Kissing the Long Face of the Greyhound includes gorgeous elegies to dog lovers, summertime, a love of women, apricots ("a blushing little butt surrendering to my teeth"), wildlife, and pencils!

Humor, immense wit, and emotional truth saturates Zipter's verses as they take their time languishing over an appreciation for the movement of the natural world as much as the static features of grief as a cat is euthanized.

The title poem is a love song to a dog harboring "the faint scent of grime and grass" and, in its gorgeous brevity, represents a collection that floats and lingers, causing the reader to return for second and third glances of its precision and emotional movement.