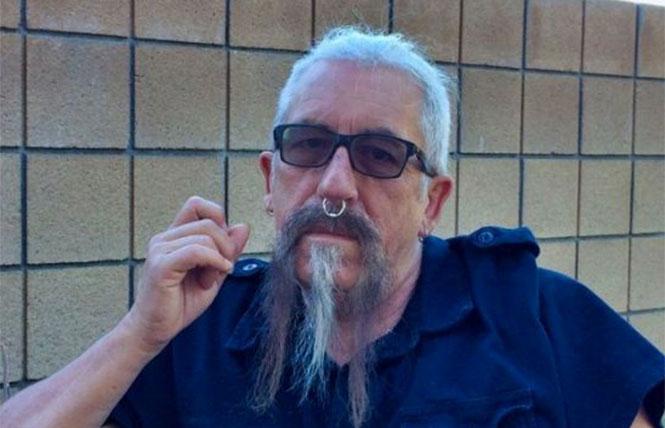 Gay historian and writer St. Sukie de la Croix's new novel, The Orange Spong and Storytelling at the Vamp-Art Café (Rattling Good Yarns, 2020), more or less picks up where its predecessor, 2017's The Blue Spong and the Flight From Mediocrity left off. By that I mean, it returns readers to the Bohemian neighborhood of Chicago's Towertown during the roaring `20s.

This time, however, the denizens are the habitué of the titular Vamp-Art Café, who are, as you may have surmised, vampires. Not just any vampires, mind you, but the kind who enjoy a "rattling good yarn." Anything, that is, except for Bram Stoker's Dracula, which, according to the Orange spong (aka Ra aka the sun) worshipping vampires, got it all wrong. Sukie was kind enough to answer a few questions about the book around the time of its publication.

Gregg Shapiro: I would describe The Orange Spong And Storytelling at the Vamp-Art Café as a set of stories within the framework of a larger story. Which came first — the concept or the stories?
St. Sukie de la Croix: [Laughs] I wish I was that organized. I tend to start fiction with a vague idea. After The Blue Spong and the Flight from Mediocrity, I knew I wanted to write another spong book, but a different spong. I knew that the spong was going to be orange. So, I typed "Orange Spong" at the top of the page and sat back and waited. Without wishing to sound spiritual, I open up my mind to any possibility, I dispense with logic and common sense and at some point, it flows out of me. My fingers start typing. I didn't know it was a book about vampires telling their stories, until a vampire stood up in the Vamp-Art Café and started telling a story. I call it trance-writing. I let the characters form and write themselves.

When you lived in Chicago you were a participant in the Twilight Tales reading series at the Red Lion. Was that a source of inspiration for The Orange Spong...?
Twilight Tales was an open mic at the Red Lion Pub on Lincoln Avenue where people got up and told stories. The idea for The Orange Spong may have come from that. That didn't occur to me until you mentioned it. Consciously, I was inspired by Geoffrey Chaucer's The Canterbury Tales. I love listening to other people tell their stories. I very much miss the Twilight Tales reading series because nothing was out of bounds. I never had to worry if I was going to offend someone. I read by necrophiliac poem "I F**k the Dead" there and they loved it. I also read a story called "Trixie, the Singing C**t" and a poem, "I F**ked an Alien on a Greyhound Bus". When you find a group of people who love you in your vilest literary moments, hang on to them. They are precious. All those people I met there are very dear to me. 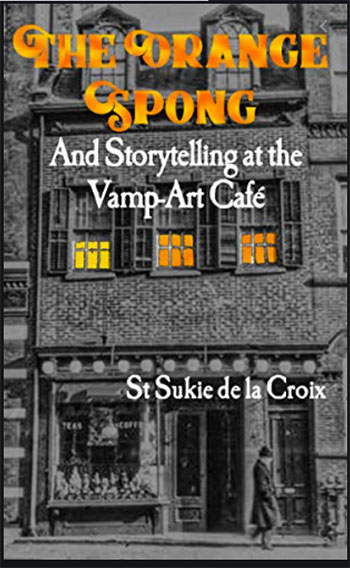 Did any of the stories in The Orange Spong... start there?
I seem to remember I read an early version of "Who Was Jane Dalotz?" at Twilight Tales while I was there. That's the only story in the book that existed before. Looking at the stories after they were finished, I think I based Charles Weymouth in "The Woman in the Puddle" on my grandfather returning from fighting in the Boar War. I see my influences after it's finished, rather than thinking about something, then writing about it. Jane Dalotz was a name scribbled onto an old photograph I found in somebody's trash years ago in England. I imagined the woman in the photograph to be one Lewis Carroll's little girls all grown up.

I'm grateful to you for writing about the Essanay Movie Studios. When I lived in Chicago and walked from my home in Uptown to Andersonville, I usually made a point of walking west on Argyle Street so I could stop and pay homage. Why did you choose to include it in the book?
In the 1920s Towertown in Chicago was exactly as I describe it in the two spong books. Many of the inhabitants of that area were wilting stars from Essanay Studios. There was one real life café owner in Towertown who was a lesbian and had her face disfigured when a giant fan blew sand onto her face for hours in a movie scene of a sandstorm. Took her face off. She sued and bought a café with the money. Touring circuses used to stay in the area. Vaudeville stars, political agitators, gays and poets. That's why I set the spong novels in that neighborhood in 1920s Chicago, because all the characters there were larger than life.

In the novel, you wrote about the vampires' dislike of the book Dracula, and also included details about Bram Stoker's homosexuality.
Bram Stoker's day job was at London's Lyceum Theatre looking after the actor, Henry Irving — a big Mary Queen. They were very close. Stoker was what we would now call a "bear." Prior to Stoker's marriage to Florence Anne Lemon Balcombe, she dated Oscar Wilde. She loved the gays ... a Victorian Liza Minnelli [laughs]. Stoker's marriage was famously sexless.

There's a description of Chicago in the book — which is set almost 100 years ago — calling it "politically corrupt and bereft of morals." Is this an example of the more things change, the more they stay the same?
Chicago is still politically corrupt and bereft of morals. That's what makes it interesting. That's why I lived there for over 20 years. If I wanted boring, I'd have moved to Fort Wayne, Indiana, which has all the charm, charisma, and mystery of a rotting dog turd on a gravel path. All the men in Fort Wayne look like child-molesters and all the women look like they died three weeks ago in a freak nail salon accident.

A few times in the book you make mention of "rattling good yarns," which is also the name of the publisher of The Orange Spong... How do you define a rattling good yarn?
It's a forgotten British phrase often applied to Victorian or Edwardian Penny Dreadful stories, or the boy's adventure stories I read as a kid. My spong books are very much in the vein of those stories, an old-fashioned beginning, a middle, and an end in that order. I don't read much modern fiction. I enjoy the books that would now be called Steampunk, authors like Jules Verne, H.G. Wells, Dennis Wheatley and H. Rider Haggard. They wrote rattling good yarns. I enjoy other writers too but the spong books are very much in that Steampunk vein.

What do you think fans of the Bronte sisters would think about the liberties you took with the stories of their lives and deaths?
I've been to the vicarage in Haworth, Yorkshire, where the Bronte's lived. There is something magical about them and their lives, so I conjured up some magic about them. As for caring about what Bronte fans might think, I don't. Other people's opinions are of no use to me whatsoever. How can you write with all that chattering "other-people" noise going on around you? All those little twittering opinions from other people. I don't understand writers who obsessively worry about what other people think. It just means you haven't found your own voice yet. That's what it means.

Was it challenging or rewarding to write the stories in the various voices of the storytellers?
Everything I write is a challenge. Writing doesn't come easily to me. As each of the vampires gets up to tell their stories, it's a different voice you hear ... or I hear, and hopefully the reader does to. To be able to write different voices, you need to listen to other people talking. I've spent my whole life listening to people talking, on buses, in stores, at funerals. I think LGBTQ folks listen to other people's conversations more than non-gay folks, and that's because we grew up having to be guarded about what we said. We sat there listening, afraid to speak in case they found out our secret.

Being a historian, would you please say something about the process of maintaining historical accuracy in The Orange Spong...?
I get very angry when history is rewritten. I see it all the time in movies. The rubbish I hear about Stonewall -- don't get me started. In both the spong books I'm trying to conjure up a time that none of us lived in. What was it like in 1924 Chicago in the arts community? It's like doing a jigsaw puzzle. If a character buys a car, I feel compelled to know what kind of car it is and where they bought it in Chicago. I use the online Chicago Tribune archives at the Harold Washington Library. What soap would this character use? When were toasters invented? What shoes would this flapper wear? The characters lived in that time and I want to take the reader back there.

How many more spong books do you have in you and what color spong do you think you might write about next?
At least one more spong book and it's either purple or green. After that, I don't know. I'm very aware of life's ruts and how easy it is to fall into them. As far as I know for sure, we only have one life, and as Auntie Mame said, "Life is a banquet, and most poor suckers are starving to death." A spong is a sphere that comes into one's life and changes it. A spong is an electric shock, a wake-up call. In the orange spong, vampires are sent from Ra, the Orange Spong, to save the planet from pollution. A spong is a catalyst.

You have written about the past in both your fiction and non-fiction. Could you ever imagine writing about your vision of the future?
No, I can't speculate on the future. Although I enjoy the silliness of Victorian sci-fi, it's not a genre I'm interested in writing myself. Not good at guessing games. I was listening to the guru Sri Sri Ravi Shankar answering questions from an audience. One asked, "Does reincarnation really exist?" The guru answered, "Why do you need to know, why can't you enjoy the mystery of it?" That's where I stand. There are unknowns and the future is one of them. I prefer not to speculate but enjoy it as it unfolds before my eyes.

The Orange Spong... is set in Chicago, but would it be fair to say that you've become better acquainted with "Ra, the orange spong, in the sky," since moving to the California desert?
Every morning I wake up in the Coachella Valley and see Ra, the orange spong, shining down on me. I meditate by the pool as Ra, the orange spong rises behind the palm trees. I grew up in England, which is rain, rain, rain, clouds, overcast, rain — repeat. Day in, day out. Then in Chicago, the weather is unpredictable — snow, high winds, rain, sun, and that's just walking to the corner store. On the way back from the corner store it's sleet, sun, hail, rain, locusts, frogs, drive-bys, a toothless crack-whore singing opera wearing nothing but her panties, and a tornado. I now live on the Agua Caliente Band of Cahuilla Indian reservation in the desert and every day I worship Ra, the orange spong and sing ... "Little darling, it's been a long cold lonely winter. Little darling, it feels like years since it's been here. Here comes the spong, doo-doo-doo-doo, here comes the spong ... And I say it's all right." A little Beatles song for the over 60s out there [laughs].