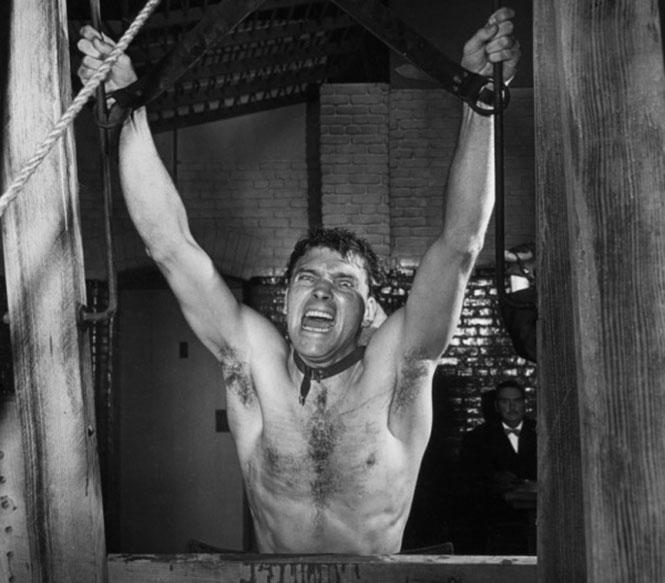 Burt Lancaster in 'Kiss the Blood Off My Hands'

Hollywood Bound, a coffee table book published by Reel Art Press, isn't about starstruck kids heading to Tinseltown in search of stardom. Rather, it's a picture book featuring black and white photos of movie stars either tied up or in chains.

On the cover, 1950s sex goddess Jayne Mansfield stares seductively at the camera dressed in a bikini top, tight fitting slacks and high-heeled sandals, with chains around her neck, wrists and legs.
But other parts of the book include imagery that might shock and offend readers today. 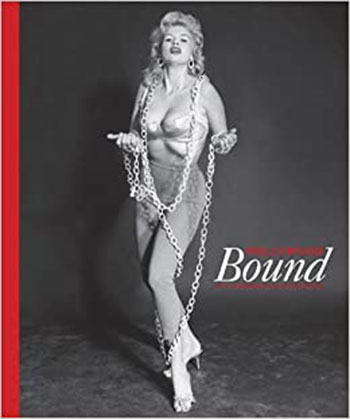 The book begins with an introduction by author Peter Doggett, who shares credit on the cover with editor Tony Nourmand. In his intro, Doggett writes eloquently and humorously about the thousands of people who are 'Hollywood-bound,' young men and women who come to the movie capitol in search of stardom. Many don't make it.

For those who do, a movie contract comes with a kind of slavery, as film studios during cinema's 'Golden Age' treated their stars and contract players like property. Doggett draws a parallel between the 'bondage' of the studio system and the onscreen bondage many actors of long ago were subjected to.

In presenting the photos, Doggett goes all the way back to the silent movie days. A young woman is seen tied to chained to a railroad track as two villainous looking gentlemen stand over her. Then comes a photo of 1940s superstar Betty Hutton, seen in a posed still from the film The Perils of Pauline (1947). Hutton is also tied to a railroad track (albeit with rope) screaming while the photo's caption reads "a stationary locomotive waits patiently behind her."

Many of the captions poke gentle fun at the photos they accompany. A 1919 shot of escape artist/actor Harry Houdini, whose torso is engulfed in chains that are attached to two steel balls on the floor is subtitled "any excuse to get back in the chain gang." The photo is from a forgotten film called The Grim Game. 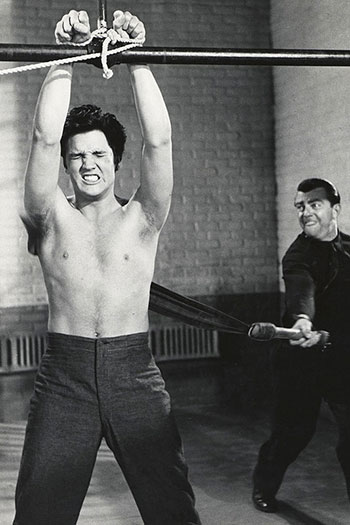 Some of the photos flirt with political incorrectness. A still from a 1918 film called The Million Dollar Dollies reveals two sisters tied to a cement pole while a man in Indian garb stares them down intensely. "Being a Maharajah allows a man certain rights over a passing pair of twins" reads the caption. Such a film would never fly today.

The book even offers an occasional glimpse of homoeroticism. In a still from the biblical epic Ben-Hur (1925), silent film star Francis X Bushman stares at Ramon Novarro (who was gay in real life) pulling Novarro on a leash!

But the book doesn't stay in the silent era for long. A good deal of it is devoted to the 1930s, '40s, and '50s, where readers will see a variety of film stars, some forgotten, some not, all in need of rescue as their captors tie them up for a variety of reasons.

Included is the famous scene from King Kong (1933), where a crucified Fay Wray awaits the appearance of the legendary ape, and a daring shot from the 1932 Roman epic The Sign of the Cross, in which a fully nude young woman is chained to a post. Her chains are covered in flowers, which hide her "naughty" areas. An ape stands before her, its fists clenched.

Horror movies are also represented. Included is a dramatic shot from Frankenstein (1931) in which an anguished monster fights to escape the chains meant to keep him from ravaging the countryside.

The book continues through to the 1960s. There's a shot of movie legend Joan Crawford from Whatever Happened to Baby Jane? her mouth covered in duct tape. There's even a still from the 1960s Batman TV series in which the Caped Crusader is all tied up as The Catwoman leans over him seductively.

Some of the photos could be deemed offensive, such as images of African American men bound in chains, but there's also a shot of African American actress Ruby Dee from the film The Balcony (1963). Dee is glaring down at a white man who is kissing her shoes.

All told, Hollywood Bound features more than one hundred photos. Some are campy, some are amusing, while some feature racist or sexist imagery from films that would never be made today. The book most definitely offers a unique look back upon Hollywood history.
www.reelartpress.com