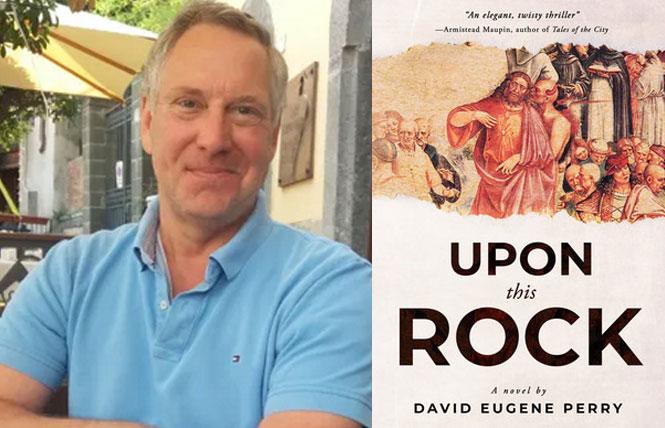 Certainly to some, San Francisco is a city of mystery. Hence, it should have San Franciscans who solve mysteries, whether it is in The City by the Bay or elsewhere. It could be Sam Spade telling us of the things dreams are made of in The Maltese Falcon, or Nick and Nora Charles in The Thin Man. Happily, author David Eugene Perry has just given us two detectives as sharp as Spade and with the wit of Nick and Nora. Yet, Perry's heroes, Lee and Adriano, represent a 21st-century update, for they are a happily married gay couple.

There's some indirect comparison to Nick and Nora. Whereas Nick and Nora match martini for martini to keep things on an uneven keel, Lee and Adriano trade barbs during crossword puzzle sessions. Their differences also extend to one of the more interesting plot points of the novel. Lee was once a hopeful priest while Adriano is a lapsed Catholic turned confirmed atheist.

Little did they know, however, that a two-month sabbatical to a rustic Italian town of Orvieto would test faith and lack of faith. The vacation was planned because of not only the need for a vacation, but also to help put aside the pain of a lost loved one, an Episcopalian priest named Brian Swathmore.

What the two young men find amidst small-town pasta and vino is mystery. They hear of a suicide of a young deacon named Andrea Bernadone. Why did Andrea, beloved in Orvieto, fall to deliberate death only days before his ordination into the priesthood? The more Lee and Adriano investigate Andrea's apparent fall from grace, the more they become involved with religious fervor.

It is here where Perry introduces us to a wide variety of characters who may or may not have anything to do with the death of the deacon. What did Don Bello, the kindly old priest who survived Mussolini, know? Or, Lady Peg, the Hedda Hopper of Orvieto? Or, Grigori, once a Swiss Guard for the Pope, but now a set designer for a Christmas pageant? Or Rev. Vicki, an Anglican priest with a secret of her own?

There are others, of course, as Perry introduces plot point after plot point. Just when you think you have a handle on the story, Perry tells you the plot has just thickened. Before you have gotten to page 360, you are introduced to Church history, scandals and hypocrisy and international intrigue.

And, oh yes, because it is a mystery, there's a killer of a surprise at the end.

Move over, Sam, Nick and Nora. Welcome the new kids to the neighborhood, Lee and Adriano.

Will Snyder is a freelance San Francisco journalist and former editor of The Bay Area Reporter.