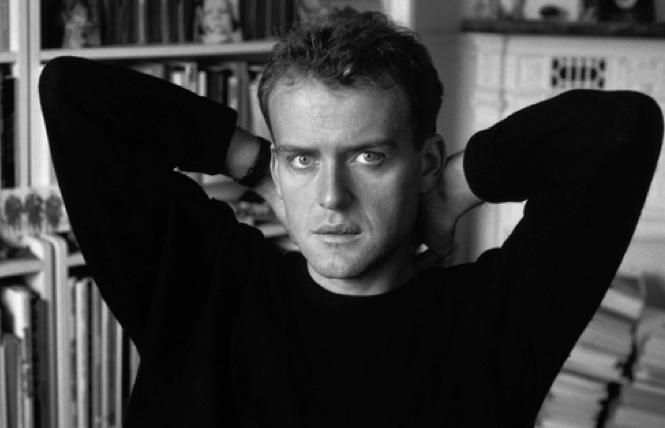 The incurable hotness of French Author Hervé Guibert owes nothing to the timely and shattering content of his mind and the publication of a most original work: Written in Invisible Ink. Guibert died of AIDS in 1991 at the age of 36 after a failed suicide attempt. This is Guibert's collection of works from when he was twenty-one until his death, his voluminous earlier publications that earned him the reputation of a writer capable of bearing the entire contents of himself.

Nearly two decades after Guibert's death, the work now emerges as a fresh contribution to the queer literary oeuvre. Written in Invisible Ink comprises four pivotal works previously published in France, including Propaganda Death; The Sting of Love and Other Texts; Singular Adventures, and Mauve the Virgin, the final compilation comprising more than a decade of Guibert's life.

Made up of Autofiction, memoir, his personal diaries, and many short essays, readers will take delight, if not even blush, at the variety, brashness, and utter subterfuge of his literary approach. With both the freshness of reportage combined with a spiked gay divulge, the writing extends the line between controversy and the more than occasional revulsion.

Author and godfather of modern queer literature Edmund White, who knew Guibert while he lived in Paris in the 1980s, commented in a recent virtual reading of Guibert's Written in Invisible Ink that, "Americans are prudish compared to the French."

The English translator of Written Jeffrey Zuckerman stated in an email interview, "Hervé is such a fascinating, difficult, sharp, and seductive writer. White has called him "Sade in jeans."

The French literary legend Marcel Proust composed what is known as the Proust Questionnaire, a series of questions utilized even by modern interviewers, originally compiled as a parlor game in Victorian times to gain material for a confession album.

Guibert answered three of the questions: "Your favorite occupation?" his reply: "Sucking off and writing"; "What would be your greatest misfortune?" his answer: "Not to die"; "Your heroes in real life?" the rejoinder: "Myself and my characters."

These visceral vignettes resemble episodic entries rather than novella or short fiction, collecting one by one as if one were reading a personal account over many years, always tending to push the boundaries of that which was previously revealed. 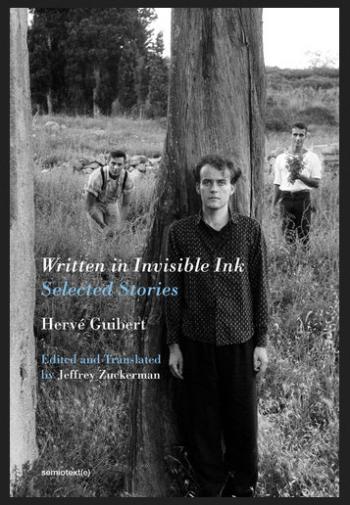 Writing through, and right up to, his own death he wrote, "My body, due to the effects of lust or pain, has entered a state of theatricality, of climax, that I would like to reproduce in any manner possible... My body is a laboratory that I offer up as a performance, the sole actor, the sole instrument of my bodily frenzies... The way I extract a blackhead from my skin, some sperm from my balls. This flood that slowly builds up and pushes through my body, from the prostate through the seminal vesicles, and then discharges, gumming up, in the cockile trachea."

Guibert became a neighbor to French Philosopher Michel Foucault and in time they became close friends.

One of the short texts of Written in Invisible Ink that most stands out and is a memorial to Foucault — always referred to by the name Muzil — is the one titled "A Man's Secrets." It was composed during his intense grief over Foucault's death, where he states in an interview published posthumously in 1992: "...the day after his death, I wrote a text about his burial. It took me two or three years before publishing it, before even having it read. Then I disguised this character, my thoughts of him were of absence, of lack. Were unbearable. His very image became wholly evanescent. I so needed this friendship to live that, when he was dead, I had to forget it."

In Guibert's other work released this month, To the Friend Who Did Not Save My Life, he reveals the truth that Foucault died not of cancer as French media had originally reported to cover the apparent shame of death by AIDS. It is this kind of soul-bearing that builds throughout Written in Invisible Ink.

To translate Guibert, for Zuckerman, "... was to translate truths I would have never let myself admit. He taught me how love and hurt can be two sides of the same coin." How Guibert's obsessions with the body, illness, sexuality, discontinuity, confession, as the translator recounts; this is the work from one language to the next written first in French by Guibert, and brought to us exquisitely in English prose.

Zuckerman asks a larger, vital question that many of us are called to answer as the new age of gay rights continues its progress: "...if gay rights were moving so steadily forward toward equality with the broader population, why preserve this particular, liminal past?"

Indeed, work written decades before openly expressing our LGBTQ sexual identities was an option, let alone accepted by the broader mainstream and primarily by western civilization, are questions worthy of our consideration.

Zuckerman concludes, "I see him as a dark angel of French literature. All his crudeness, all his seeming cruelty arises from a pure sentiment: that secrets have to circulate. That Foucault died of AIDS, that one of Guibert's closest collaborators betrayed him, that love was often fleeting and rarely lasting in his relationships — all these painful facts formed the foundation of his work."

Newly issued, published and republished, Hervé Guibert's Written in Invisible Ink is an essential queer writer for today. Due largely to the efforts of Hedi el Kholti of Semiotext(e), it is distributed by The MIT Press and available through most online booksellers.