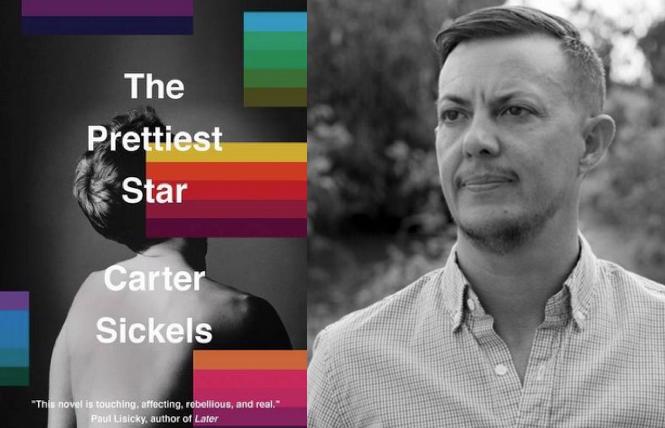 The premise of Carter Sickels' novel The Prettiest Star is one that is very much based on the kind of real circumstances many gay men grappled with in the AIDS years of the 1980s. A naïve young man with wanderlust strikes out on his own from a strict, religious Midwest upbringing and hits New York City like an unexpected summer storm.

Sickels, author of 2012's well-received West Virginian character study The Evening Hour, expertly captures this scenario from both angles: the arrival and the ensuing years-long party across the city, then the unexplained fever, the crushing sadness, the death sentence, and the tentative backtracking return to a homeland that had never embraced him in the first place.

The story opens in 1986 where an epidemic-ravaged urban gay community struggles to come to terms with its own devastating decimation. Brian left good old Chester, Ohio when he was 18, and just six years later, he is watching his own health terminally fail after his partner succumbed to AIDS and most of their shared circle of friends already dead, amounting to his attendance at nine funerals in two years.

His desperate decision to return home sparks all kinds of resentment, anger, violence, and arrogance from his family and the nasty, bigoted townsfolk. Mother Sharon agrees to his homecoming, but father Travis sets strict sanitary and disinfectant ground rules, which ironically mirror current trends in COVID-19 home decontamination.

Brian glumly drives through town lamenting his past and remembering the hope he'd harbored for a new life of fun and freedom years ago when he'd left. "It was not supposed to turn out like this," he thinks.

As the rumor mill churns across the petty social circles of Chester, Brian is ejected from the town pool for "infecting the water" and basically becomes the diseased town pariah and at the mercy of wicked scorn and random homophobic violence from all corners of the region.

With his grandmother being his sole defender and confidante, Brian exasperatedly trudges through his time in town slowly being robbed of the hope he'd arrived with that things could possibly be tolerable, if he moved back home.

The story is a powerful, heartbreaking, and emotionally resonant work, and, while a painful and unjust narrative to behold, it also portrays so much of the gay community's fabric, its decades of struggle, and its fight for equality in the face of unbridled disease and unrest.

As Brian reaches his breaking point and decides to flee before he is killed by one of Chester's finest sharpshooters, he reflects on the nature of going home again. "You come back to be seen, to be accepted, and to be loved," none of which he'd received.

As his health declines, his mother and father lament on their failure to support their son in his time of need, and that failure to extend human grace, kindness, and dignity to another in need, may be the worst tragedy of all.