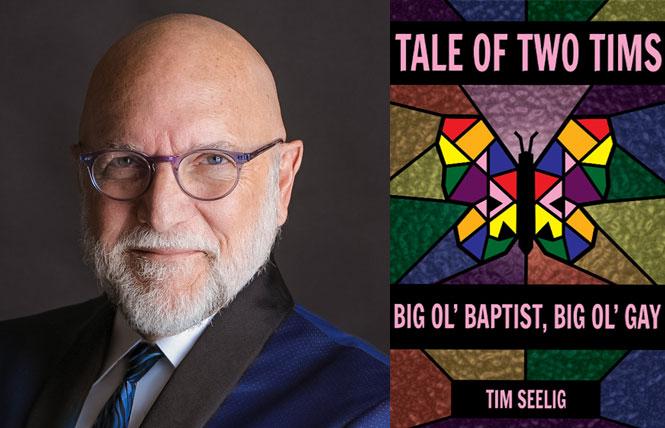 Tim Seelig has led a double life. For the first 35 years or so he presented as heterosexual and was deeply immersed in the Southern Baptist Church. At around age 35, Seelig underwent a sea change. No longer able to hide who he was, he came out as a gay man. At the time, Seelig was married with two children. The revelation cost him his family, his friends, his position in the church, and almost everything he owned. Undaunted, Seelig picked himself up, dusted himself off and moved on.

A trained singer and conductor, Seelig became the leader of the Turtle Creek Chorale, a gay men's chorus in Dallas, Texas, which he conducted for twenty years. He also performed solo, including a well-received debut recital at Carnegie Hall.

Seelig currently serves as the artistic director and conductor of the San Francisco Gay Men's Chorus, a position he's held for the past decade. He is also artistic director of the National LGBTQ Center for Arts. Most recently Seelig was seen in the film Gay Chorus Deep South, which documents a recent tour the SFGMC took across several states not known for their hospitality to LGBT people. The purpose of the tour was to reach out and to open people's hearts and minds.

Seelig's life is one of great accomplishment. It's a life filled with exhilarating highs and tremendous lows. In his just published memoir, A Tale of Two Tims: Big Ol' Baptist, Big Ol' Gay, Seelig shares the story of his incredible life, from his beginnings as part of a family of devout Southern Baptists, to his work with what is perhaps the most famous gay chorus in the world.

Seelig spoke to the Bay Area Reporter about why he chose to pen an autobiography.

"Along life's path, people say you should write a book," he said. "But the real final impetus was the death of my daughter in 2018. And all the ups and downs of life paled with that event. It really shook me to the core." Seelig took a three-month sabbatical, during which he did a lot of writing.

"It seemed like it was falling into the shape of a book," Seelig said. "An autobiography/memoir. It's both."
Seelig explained the meaning behind the book's title.

"I lived 35 years as a good Southern Baptist Boy, married with two kids," he said. "The end of that 35 years saw me as the Associate Minister of Music at First Baptist Church of Houston, with 22,000 members, when I came out. I began, within a year, conducting LGBTQ choruses, so I've now been conducting gay choruses for 34 years. So my life is split right down the middle, with two completely different backdrops."

Seelig added that he was very forthright while writing the book but noted that some people's names were left out in order to protect the "not innocent."

"Some of the things that happened in my life, the people are still alive, so I left their names out," he said.

Things didn't go so smoothly between Seelig and his son. As a high school senior, his son disowned him, and at age 24 the son changed his last name, saying that he didn't want anyone to know that he was Seelig's son.

"Now, we are best friends," Seelig said. "And especially with the loss of my daughter he and I have become very close, because we really need each other."

Seelig's parents, he said, never disowned him or stopped loving him.

"We don't pray that Tim will change," his parents would tell people. "Because we believe that God is omnipotent, and if He is, He has the power to change Tim if he wants to. So we just pray for Tim and his health and his happiness, and we're going to let God deal with the other part."

Seelig shares these and other life stories in a memoir that's heartfelt, funny, sad, but ultimately uplifting. A Tale of Two Tims is exceptionally well written and easy to read with quick, short chapters. It's a must-read for anyone who's ever seen Seelig conducting the chorus or listened to him in concert.

"My hope is to entertain," Seelig said. "I want people to laugh, and to cry, which they will. And I want people to look at their own lives and think that they can apply some of what Tim has done and lived through to their own lives. When I came out at 35, I wasn't a very nice person. I was an evangelical minister of music in the Baptist church, and I wasn't very nice. I have had to have that beat out of me."

Because of the ongoing Covid-19 crisis, Seelig cannot do any in-person book signings, but has done online readings, with a bit of music.
And while the Chorus is on temporary hiatus, Seelig wants to assure people that they haven't seen the last of the chorus.

"Guiding the chorus through Covid, and now guiding the chorus through Black Lives Matter all at once, and the fact that we can't sing, and the fact that we can't get together and process to create and to make plans in incredibly hard," he said. "There's a difference in what we do and who we are. What we do is rehearse and give performances and who we are is people that believe in change, we are committed to change. And while Covid can take away what we do, it can't take away who we are. And we'll be as strong when this is over as we were when this began."

The book is available in Kindle and paperback, and will soon be available in audio format, read by Seelig himself. Autographed copies of the book can be ordered from Seelig's website, www.timseelig.com