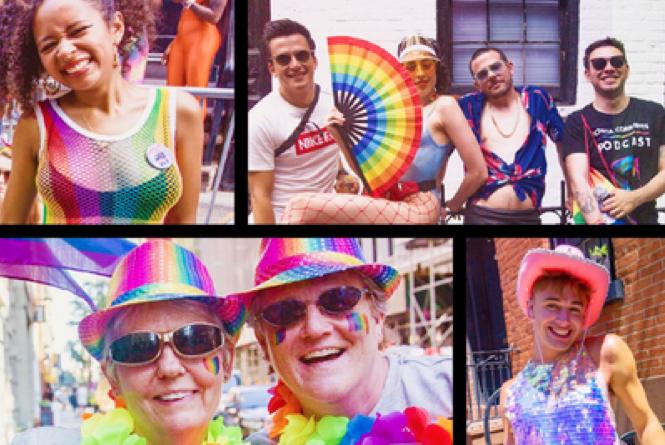 Can't attend a Pride march this year? To commemorate the in-person absence, or to just cheer you up, four new and recent photos books celebrate Pride's decades of parades, celebrations and protests, in photos by Alyssa Blumstein, Fred W. McDarrah, Ron Williams, and from The New York Times archives.

For a festive documentation of florid fey fun, Ron Williams' Capturing Our Diversity: Three Decades of San Francisco Pride Images includes 183 pages of color and black & white photos from decades of San Francisco and regional Pride events. Color-bedazzled Pride pictures become profound documents alongside his black-and-white photos of the pre-AIDS Pride parades. This nostalgic photo memoir by a participant eyewitness activist makes a perfect June gift for yourself or others. ron-williams.com|Ron-Williams.com

Pride: Fifty Years of Parades and Protests from the Photo Archives of the New York Times documents a powerful visual history of five decades of parades and protests of the LGBTQ rights movement in New York City. These photos, paired with descriptions of major events from each decade as well as selected reporting from The Times, showcase the victories, setbacks, and ongoing struggles for the LGBTQ community. Bookshop.org

Also taking an East Coast focus, People of the Pride Parade, with photos by Alyssa Blumstein, the book shares images of the colorful celebrants of the New York City Pride March and Dyke March, capturing the faces that bring the rainbows and liveliness Pride shines with today. Through joyful portraits of two hundred LGBTQ+ community members and allies from New York City's World Pride, Blumstein's images offer a portal to the spirit, sequins, and sexual liberty of the weekend. Apollo Publishers 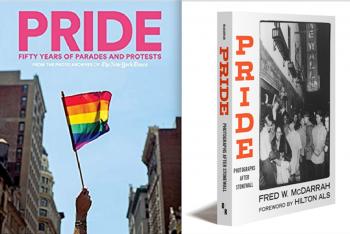 For a bit of a more political protest theme, Pride: Photographs After Stonewall includes early New York City images by acclaimed photojournalist Fred W. McDarrah. Known for his group photos taken just days after the Stonewall riots outside the bar (for The Village Voice), the late McDarrah also documented many other Manhattan protests and events within the LGBT community.

Twenty-five years ago, to mark Stonewall's 25th anniversary, McDarrah brought out a work that became a classic: Gay Pride: Photographs from Stonewall to Today. That book has long been out of print. Now, scanning from original negatives, OR Books has lovingly re-set and re-designed the book, newly entitled Pride. This edition also includes a number of photographs not in the original and available nowhere else.

This year, along with the paperback edition, publisher OR Books offers a clothbound hardcover edition, with color jacket and endpapers, in a limited edition of 300 copies. OR Books

Pride 2019: Pride books for the young

The History of LGBT Bookstores in the Castro