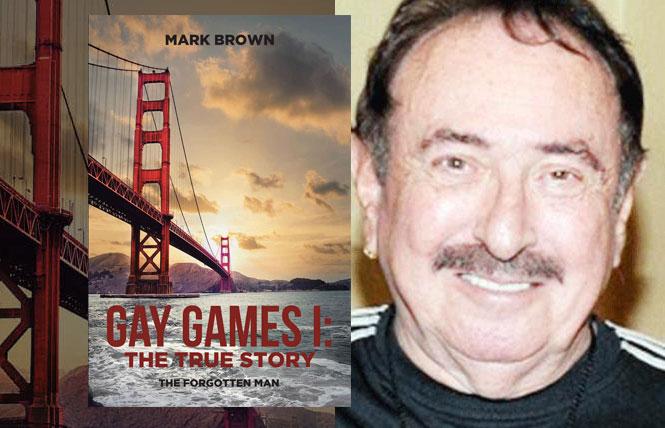 Thirty-eight years ago, Mark Brown, a former sports columnist for the Bay Area Reporter as well as an early organizer in local LGBT softball and bowling leagues, left the organizing group of the inaugural Gay Games. His sudden departure just weeks before the event caused his earlier work for the event to be largely forgotten and his name mostly absent from the subsequent historical record. Now he has published a book that shares his perspective on his involvement and his desire for recognition.

The book repeatedly states the Gay Games would never have happened if Brown had not been involved. Never mind that Gay Games founder Tom Waddell was the one who originated the idea and defined its mission, or that when Waddell first mentioned it to Brown, Brown said he wasn't interested.

Never mind the enormous team of dedicated volunteers who did the day-to-day work of making the Gay Games become reality, from last minute scrambling when secured venues became unsecured, to the encouragement of new local clubs to form in sports such as wrestling and track to be created from scratch. When a need arose, volunteers were found.

There is a saying that if you think you are indispensable to an enterprise, stick your hand in the water. Then pull it out and understand the hole you leave will be how much you will be missed. Saying Brown played key roles in helping the Gay Games come into existence is one thing. It is foolhardy to say they would not have existed without him. Waddell had found Brown and Paul Mart, the third founder. If he'd struck out with Brown, there is little doubt he would have continued to search for other volunteers to make it happen.

As far as credit goes, there is an odd omission in the book, which is composed of 26 opening paragraphs by Brown about his life leading up to the formation of a board of directors for the Gay Games; a San Jose State master's thesis paper written by a college student about Brown and his involvement with the Gay Games; and post-Games sports reports written at the time by the coordinators for those events.

Brown's name is listed, and the authors of the post-event reports are credited. But no place in the book is the name of the person who wrote the bulk of the book, the college paper, ever acknowledged.

The academic paper itself presents no footnotes identifying the source of some of its statements. It incorrectly states Waddell died a year before Gay Games III (Waddell died in 1987; Gay Games III in Vancouver occurred in 1990). Repeatedly asserting the event would not have happened without Brown's involvement, it never explains what would have prevented other volunteers from becoming involved. It does not mention that during much of his tenure with the Gay Games, Brown was paid $100 a week for working with the volunteer organization.

Late in the book Brown says he was jealous of the attention Waddell was increasingly getting as the face of the Gay Games. (It was Waddell, not Brown, who was sued by the US Olympic Committee and had a lien placed on his home because the Gay Games were using the word "Olympic.")

"I shouldn't have resigned," Brown says in the book. "It was a big mistake. It's one of the few mistakes I've made in my life. Ah, and I regret it, but my ego got the best of me."

Woven throughout the book are hints of the different visions Waddell and Brown had of what the Gay Games mission, look and culture should be.

Consider the times. News headlines in the Bay Area Reporter at the time are dominated by police raids, often brutal, on gay bars. A mystery illness killing gay men across the country is identified as Acquired Immune Deficiency; AID, not AIDS. Queers are not allowed in the military. Former major league baseball player Glenn Burke has been driven out of the sport and is starring in the local gay recreational basketball league. The Sisters of Perpetual Indulgence are becoming more political and alienate many in the community when they burn an American flag.

Brown discovered sports as a gay community recreational activity. He liked to dress in drag using the name Bubbles and was heavily involved with the Imperial Court.

Waddell was an Olympian. "I didn't know who Waddell was," Brown told me in an interview for the B.A.R. in 2009. "Nobody else did. He was an Olympian — what was that? It meant nothing to me."

Waddell was a driven individual. He marched in Selma. He competed as a decathlete in the 1968 Summer Olympics in Mexico City. He knew what it was like to be a gay person living on the fringe of society, and he knew the exhilaration of being cheered by thousands while marching into a stadium — cheered mostly by the same folks who kept queers at the fringe of society.

Waddell wanted to share the joys and benefits of serious sports with other individuals faced with discrimination. He wanted to make sure women, people of color and gays were all welcome, all supported, all empowered.

And he wanted to make sure gay and lesbian athletes were recognized and accepted by the mainstream, which meant following competition rules, showing respect for the sports, wearing the uniforms of those sports.

At times, that mainstream approach to keep folks on point clashed with the desire many had for the Gay Games to be a showcase of differences in expression. According to the book, Waddell and other Gay Games leaders talked with the Sisters of Perpetual Indulgence and got them to agree not to dress in drag at the event. Brown, the book says, understood the rationale and went along with it, but later thought it was wrong.

As the Gay Games drew closer, the non-profit organization, San Francisco Arts and Athletics, brought in new blood and many roles changed: standard, even necessary, operating procedure for any fledgling non-profit launching an untested product. Brown said his jealousy increased as Waddell stepped more to the front under the market plan initiated by another new professional volunteer; and he was also miffed when the board wanted to add a women's sports co-chair.

So Brown resigned. The book reports that the board declined his resignation and offered him a role in press conferences and the title of Co-Chair of the Gay Games. Brown did not accept the offer, left the board, and was not part of the post-event effort that turned Gay Games I into the quadrennial life-changing global force it has become.

The details surrounding Brown's resignation and its aftermath are seldom mentioned in other historical accounts, so that is the most intriguing part of this narrative. It would have been beneficial to read more about the details of the work Brown and others did during the formation of the Gay Games: the specific anecdotes about recruiting and training volunteers, dealing with mainstream sports groups, securing venues and so forth.

The most uplifting parts of the book are the short summaries of the results of the sports that were contested. Forget whatever internal acrimony there was: in the reports, you get a sense of the breathless excitement the athletes and coordinators felt at having been part of something significant and wonderful. It's a wonderful reminder that, as I have told a fellow Gay Games volunteer over and over through the years, we don't do this for us and we don't do it for thanks.

We do it for the athletes.

The book is available through several online vendors such as Amazon, Barnes and Noble, and Apple. Curiously, the book is listed in the Fiction category on www.Amazon.com and its author page links to a different Mark Brown.