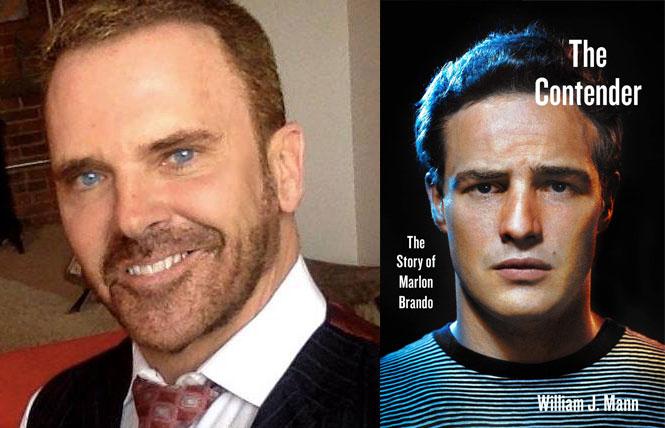 William J. Mann, author of 'The Contender: The Story of Marlon Brando'

There's little left out of William J. Mann's superb biography of Marlon Brando. In The Contender: The Story of Marlon Brando, Mann gets into the psyche of the late screen icon and lets readers know what made Brando tick.

Brando (1924-2004) is considered by many to be the greatest screen actor who ever lived. Indeed, his performances in classics like A Streetcar Named Desire (1951), On the Waterfront (1954) and The Godfather (1972) still give viewers chills and are still considered to be lessons in Method acting by the generation of actors who followed him.

It may surprise some readers to find out that Brando despised method acting and never thought all that much of his profession or of the industry that supported him. Rather, he saw acting as a means to an end, a way to support his ex-wives, ex-lovers, and friends.

But he recognized the benefits of being a celebrity. Deeply committed to social justice causes like the civil rights movement and Native American rights, he used his fame to draw attention to these issues. Brando famously refused to accept his Oscar for The Godfather as a protest against the way Native people were depicted in Hollywood films.

Mann's prose goes into great detail about the actor's human rights work, including his involvement with the civil rights movement. He marched with the Congress of Racial Equality and supported Dr. Martin Luther King. Brando solicited many of his fellow stars to participate in civil rights marches. Brando was also an early advocate of the anti-death penalty movement.

It was while he was working on these issues that he was his happiest. These causes made the actor feel as though he were doing something useful, that he was making a positive contribution to society.

As Mann reveals, much of Brando's life wasn't happy. He was the product of an abusive, emotionally distant father and an alcoholic mother who died young. His youth haunted him for the rest of his life. While he was at the peak of his film stardom in the 1950s he suffered severe bouts of anxiety and self-doubt and was in analysis for quite some time.

He was insecure about many things, including his acting ability, but he was always quite secure in his sexuality.

Brando had affairs with many women and was also known to have had a few dalliances with men. Mann, who is himself gay, does not shy away from the actor's sexual fluidity.

Brando was also insecure about his parenting skills, and though he genuinely loved his children, there were many problems. The book opens in the early 1990s, when Brando's son Christian was on trial for the murder of his daughter Cheyenne's boyfriend. Brando was shattered by the incident.

As the book recounts, the younger Brando was a troubled soul whose childhood seemed to set him up for tragedy.

Throughout his youth he was caught up in the never-ending court battles between his parents. Model-turned-actress Anna Kashfi, the boy's mother, was a vindictive shrew who did everlasting damage to her son's mental health. Brando didn't know how to reach the boy and tragedy was the result.

At over 600 pages, The Contender: The Story of Marlon Brando is a long read, but it's meticulously researched and beautifully written. Mann goes beneath the surface of this most complex man and lets the reader know exactly who he was. Readers will also learn a great deal about those who were closest to Brando and how they and Brando related to each other.