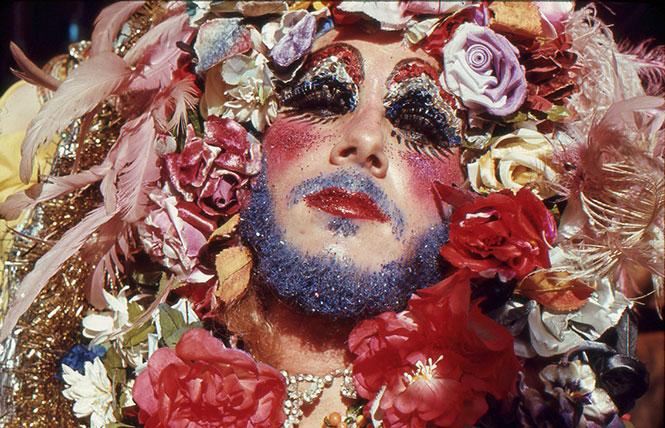 Half a century ago, a bedazzled assortment of psychedelically-influenced, collective-living, sexually experimental, and inherently theatrical gay men and straight women forever transformed the Bay Area's cultural landscape. With genderfuck high drag spontaneity and an abundance of glitter as their bottom line, the members of this ever-expanding assemblage of lavender post-hippiedom somehow managed to find each other in the Haight.

Brought together, in part, by the alchemical powers of New York experimental theater veteran Hibiscus, who within a week of his arrival declared, "We are all so beautiful, Angels of the highest order, we must put our brilliant lives on the stage," this little band set out to share their wonders with the world. 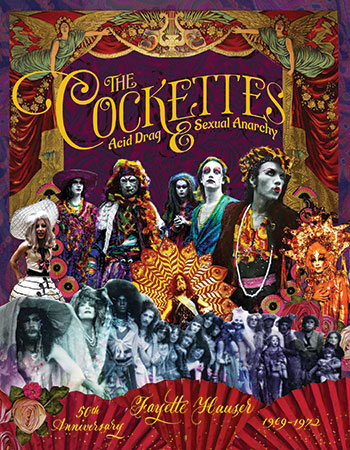 The former vaudeville palace at Columbus and Powell had become the setting for the Nocturnal Dream Show, a weekend late night showcase of experimental and vintage film that drew a loyal crowd of stoners and avant-garders.

The goal was to satirize New York's high-kicking Rockettes with a genderfuck Can-Can the likes of which had little precedent. Introduced as The Cockettes, out came 13 wildly bedecked cultural pioneers led by Hibiscus, who carried a portable wind-up Victrola. As Fayette relates:

"When the scratchy 78 came on with its small, low, shrillish mono tinny old french music hall sound, the audience was momentarily held spellbound...Then Hibiscus grabbed my hand and we rushed forward to the front of the stage. There was nothing demure or polite about this Can-Can. We got wild, led by our Shaman Hibiscus who was kicking, shaking and flinging his beautifully bedecked body everywhere. We followed his lead. The energy skyrocketed. The Palace was on its feet, screaming. When the record ended, the audience was shrieking, stomping and not about to stop."

With a surge of energy that paralleled, in many respects, the far less flamboyant but equally determined Gay Liberation Front (GLF) movement that built upon the proud and defiant energy of New York's Christopher Street Stonewall Rebellion of June 28, 1969, the Cockettes mounted show after show. To their ranks were drawn John Waters, who contributes an introductory essay to the book, Divine, pianist Peter Mintun, Sylvester, and more. 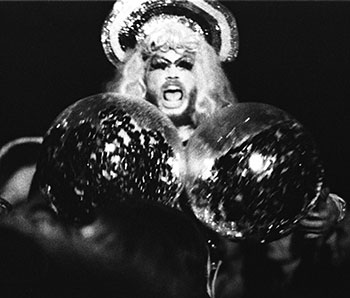 As Fayette explained by phone, "After the first show, I'd have a boyfriend, bring him home, and he would end up in a dress and some lipstick and be in shows. In the early photos I can see all these different boyfriends whom I brought home. They loved it. My early romance history is in these photos."

The Cockettes were catapulted into the open big time after the very gay New York critic Rex Reed, along with Truman Capote and Joanna Carson (Johnny Carson's wife), caught one of the shows at the Palace.
Not long after Reed trumpeted their gifts in his nationally syndicated column,18 Cockettes flew to New York City, where they intended to hold forth for several weeks in the huge, rundown, technically handicapped Anderson Theatre. The essays by Fayette, Sebastian, and Maureen Orth that recount that adventure, as well as the photos and clippings, are alone worth the price of the book.

The drama that ensued was a classic tale of collision between two vastly different consciousnesses. To coin Fayette's terminology, the "psychedelicized" West Coast theatrical pioneers found themselves before a 'been there, seen that' audience of New Yorker glitterati who felt that their star status (as in Reed, Capote, Andy Warhol) was glitter enough.
Instead of stoned-out San Franciscans who routinely erased the barrier of the proscenium and made themselves part of the act, the ill-prepared Cockettes faced folks who expected their meal to be served up to them in standard theatrical fashion.

This member of New York GLF attended the second night performance —somehow the Rockefellers, who were also present, failed to say hello— and witnessed what appeared to be an onstage meltdown for which no amount of dresses, glitter, and freely proffered genitals could compensate. We who had frequently chanted, "Out of the closets and into the streets" couldn't wait to make our way back outside, shaking our heads while asking what the mess was all about. 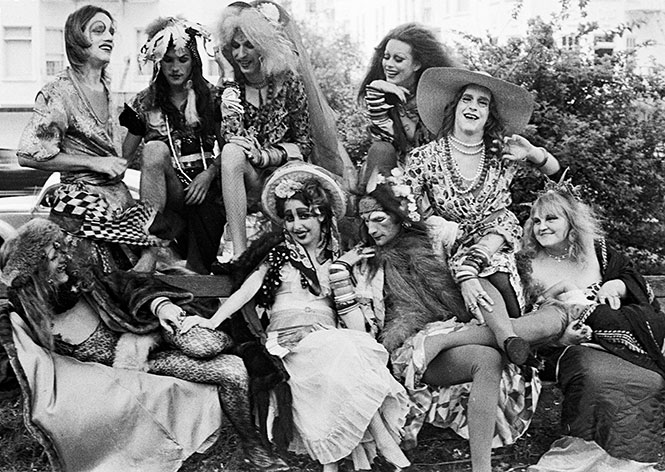 Nearly all the Cockettes collective members near their headquarters in the Haight. Photo: Fayette H.

"Our producers sadly thought that we could transport what we did in San Francisco out to New York City and everybody would just get it because we were so fabulous, but that's not quite what happened," Cockettes Music Director Scrumbly (Richard Koldewyn) explained by phone. "We needed to be introduced and explained. We'd had a year and a half exposure in San Francisco where the Cockettes grew organically. To take what we were and plop it in front of a New York Broadway opening night audience was ridiculous... They just threw us up there on a stage with all the New York pros, but with no time or consultation or introduction as to what we were about. It was not a good combination."

The Cockettes soon switched shows, pulled their act together, and reportedly got significantly better with each passing night. But the damage had been done. While they continued to mount a number of successful shows in San Francisco, the energy had peaked.

"We went out with a bang," Scrumbly recalled. "In July or August of 1972, our last official show was 'The Miss Demeanor Beauty Pageant.' We opted to do it at the House of Good, which later became the People's Temple. Divine was last year's pageant winner, and John Waters wrote a brilliant speech for her. We decided that was it; it just played itself out."

If there is any criticism of Fayette's indispensable book, it is the choice to cut over-budget pages by sacrificing narrative that might have described the Angels of Light, who continued in the Cockettes' wake, and acknowledged the eight members of the troupe who have survived drug overdoses, AIDS, liver disease and more.

Nonetheless, The Cockettes: Acid Drag and Sexual Anarchy, 1969-1972 offers far more than any expertly wrought filmed documentary possibly can. It's a book to have and to hold, filled with lovingly penned artist tributes and photo after photo to marvel at.