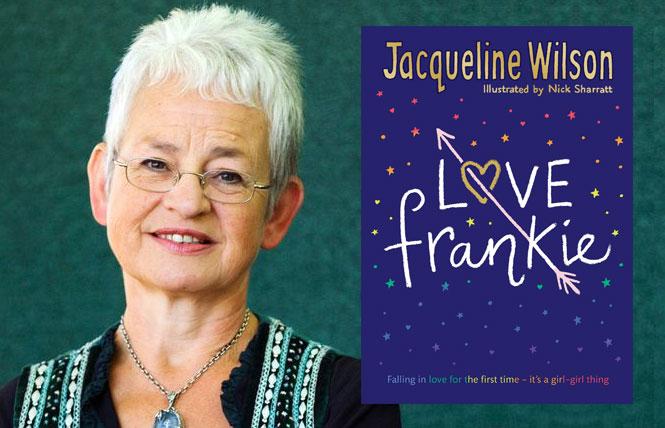 Best-selling and world-renowned children's book author Jacqueline Wilson proves that it's never too late to come out. Wilson, 74, is the beloved and award-winning author of more than a hundred books.

On April 4, in an interview with The Guardian newspaper, Wilson revealed that she has been living "very happily" with her partner Trish Beswick for 18 years.

The couple met at a party after Wilson dissolved her longtime marriage to a man. In a 2017 interview, Wilson said she remained in her marriage despite having little in common with her husband. "For many years I stuck it out because that is what you did..."

She quipped that one friend said, "I don't think you are a lesbian, I think you are a Trishian." Wilson replied at the time, "I think that really sums me up."
Those close to the author, including her mother and her daughter, were aware of the couple's relationship.

In her interview with The Guardian, Wilson said that her mother was "appalled" at her relationship, but quipped, "That wasn't too devastating for me because my mum cordially hated my ex-husband and she didn't really approve of any of my friends."

Wilson said, "I've never really been in any kind of closet. It would be such old news for anybody that has ever known anything much about me. Even the vaguest acquaintance knows perfectly well that we are a couple."

The occasion for Wilson's public coming out is the publication later this month of her new novel, Love Frankie, about a young girl who falls in love with a female classmate and must come to terms with that.

Wilson said her "heart and soul" went into the novel. But she explained that the publication meant her personal life would be on display. She said she knew "perfectly well that it would shine a little light on my own private life" because Wilson is one of the best-known children's authors in the world.

Wilson has been the Children's Laureate and was awarded an OBE (Order of the British Empire) in 2002, making her a Dame. She has won numerous book awards, including the Children's Book of the Year Award and a BAFTA. She has also been short-listed for the prestigious Whitbread and Carnegie awards.

Four of Wilson's books appear in the BBC's The Big Read poll of the 100 most popular books in the U.K. Wilson was a U.K. nominee for the international Hans Christian Andersen Award in 2014.

Wilson does not see herself as a role model for young lesbian, bisexual or queer girls struggling to come out.

"I don't think that girls would ever want a grey-haired, wrinkly writer as a role model if they were wanting to feel good about maybe being gay," Wilson said. "I'm sure they could find much more glamorous examples."

In Wilson's new novel, Love Frankie, the soon-to-be 14-year-old Frankie is mired in teen angst. She is bullied at school and her home life is complicated, due to her mother's severely disabling illness, multiple sclerosis.

Frankie feels pressured from all sides, forced to take on adult responsibilities at home while also dealing with the problems at school. The leader of the gang bullying Frankie is Sally, the prettiest girl in her class.
Frankie and Sally work out their conflicts and become friends. But soon Frankie begins to feel there is more to her emotions than mere friendship. But, as in all budding teen romances, she wonders if Sally feels the same way.

Wilson is known for her edgy and controversial novels dealing with issues of divorce, mental illness and other complex themes that are often left out of middle-grade books for kids.

But she stressed that she has not written about sexuality or sexual orientation previously in a central character because she didn't want sexuality to have any negative connotations. She told The Guardian that she was telling stories about kids with problems, and she "didn't see any problem whatsoever with being gay."

Love Frankie will be published this month by Penguin Books.