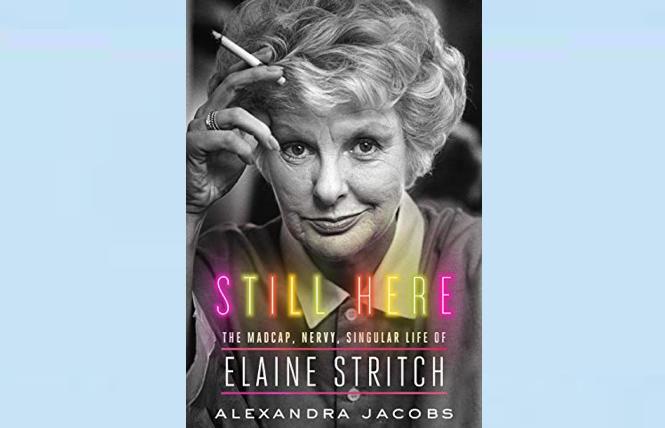 Although never a superstar like Ethel Merman or Helen Hayes, she had a remarkable career. It and her volatile personality are well-captured by Alexandra Jacobs in Still Here: The Madcap, Merry, Singular Life of Elaine Stritch (FSG, $28).

The youngest of three girls in a devout Catholic family, she demanded attention as a toddler. Her mother was a proper suburban matron for whom appearances were critical. Elaine, slim, pretty, blonde, with large blue eyes and long, shapely legs, moved to Manhattan, studied with Edwin Piscator, and first garnered attention in a 1947 revue, Angel in the Wings. 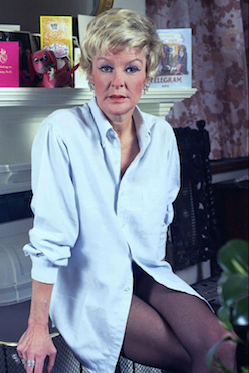 Although born in Detroit, Michigan, and reared in its tony suburb Birmingham, Elaine Stritch (1925-2014) was essentially a New Yorker. She performed on TV, film, and cabaret, but Broadway was the venue for which she is best remembered by two generations of theatre cognoscenti. She triumphed in musicals and searing dramas.

In 1950, she understudied Merman in Irving Berlin's Call Me Madam, simultaneously appearing in a revival of Rogers & Hart's Pal Joey. She stole that show singing Zip, impressing producer Leland Hayward.

When Merman refused to tour with Madam, Hayward, after considering several better-known performers including Carol Channing, signed Stritch for the national road company. Although too young for the part, she scored. Her voice was lower than Merman's, but almost as big. Even this early in her career, however, Stritch was a selfish performer, upstaging co-stars to keep audiences focused on her.

In 1956, she had a supporting role in the original production of William Inge's Bus Stop, which led to her meeting actor Ben Gazzara, then starring in Tennessee Williams' Cat on a Hot Tin Roof. They became lovers. They landed movie roles in Italy. Stritch took a featured part in David Selznick's remake of A Farewell to Arms (1957), starring Rock Hudson and Jennifer Jones. She fell for Hudson, not realizing he was gay.

She starred in Noel Coward's 1961 musical Sail Away. She initially had a small part, but ultimately became the star of the reworked show. It failed. Two years later, she replaced Kate Reid as the vitriolic, hard-drinking Martha in the matinee cast of Edward Albee's Who's Afraid of Virginia Woolf? (The play was so demanding on the actors that two casts were used during the run.) 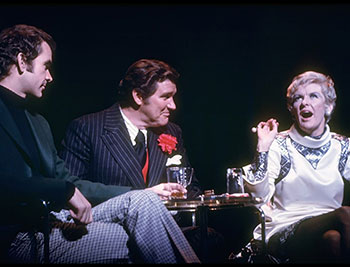 Other successes included revivals of the Leonard Bernstein-Betty Comden and Adolph Greens musical Wonderful Town (1966) and Coward's Private Lives (1968), in which she played Amanda. She resented Angela Lansbury, who had starred in Stephen Sondheim's first musical for which he wrote the lyrics and the score, the unsuccessful Anyone Can Whistle.

In 1966, Lansbury was the Queen of Broadway as Jerry Herman's Mame. That same year, Stritch was appearing in stock in Dayton, Ohio, with Gloria Swanson in The Women. On opening night, she delivered her lines so slowly that the performance ran 45 minutes late. The audience loved it. But Swanson and the other actresses called Actors Equity to demand she be replaced. She was.

Finally, in 1970, Stritch starred in an original Sondheim musical, Company, earning accolades and ovations singing, "The Ladies Who Lunch." But the cast resented her upstaging. Stritch was scheduled to play Mama Rose in a 1973 London revival of the Jules Styne-Sondheim musical Gypsy. But her name failed to sell tickets.

Before the show opened, Lansbury replaced her, ultimately bringing it to New York in 1974 and winning a Tony for her performance. Lansbury would also star in the original production of Sondheim's Sweeney Todd (1979), garnering another Tony. Stritch wanted to create the role of Mrs. Lovett. 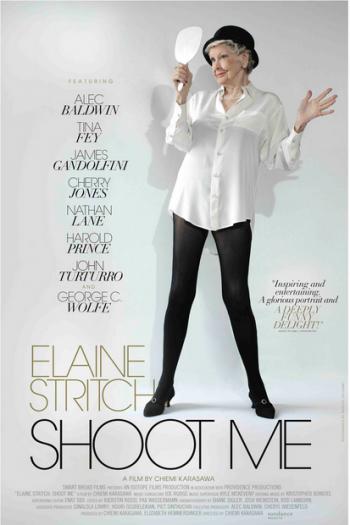 She was the first choice for Dorothy on TV's The Golden Girls (1985-92), but she arrogantly rewrote the script before her test. Bea Arthur got the part. Stritch dismissed the series, but it would have made her wealthy and a household name. In 1993, she got the featured role of Parthy in Hal Prince's revival of Jerome Kern-Oscar Hammerstein's Show Boat.

Initially offered $7,500 per week, she demanded and got $15,000. Prince reworked the story and gave her "Why Do I Love You?" to sing as a ballad to her granddaughter. She brought down the house. But her behavior resulted in T-shirts saying, "I Was in 'Show Boat' and I've Got the Stritch Marks to Prove It." In 1996, she played Clare in the revival of Albee's A Delicate Balance, to considerable acclaim.

In 2002, she collaborated with John Lahr on Elaine Stritch At Liberty, a heavily embroidered autobiographical one-woman show. She was mesmerizing: funny, touching, wry. It earned her a Tony. But their relationship ended in acrimony and litigation. In 2010, she replaced Lansbury as the mother in a revival of Sondheim's A Little Night Music.

Her marriage to actor John Bay lasted from 1975 until his death in 1996. They had no children.
Stritch's vulgarity was almost as infamous as her alcoholism. She began drinking at 14. Alcohol eased her stage fright. Her battle with this addiction lasted decades, with long periods of near-abstinence. But she was drinking in the last few years before her death.

Her final engagement (2005-11) was at the Café Carlyle at Manhattan's Carlyle Hotel, where she lived until a year before her death. Her voice was gravely and rough. She often forgot lyrics. But she told show business stories. Audiences loved it.

Jacobs is a sympathetic but not uncritical biographer. Her research is meticulous. Sources are cited in endnotes. Her prose is graceful. Elaine Stritch had a singular career, and Jacobs does it justice. She was a complex, contradictory, demanding narcissist who exploited her enormous gifts and received the adulation she had craved since childhood. Jacobs resurrects her.

Readers who never saw Stritch in person will wish they had. Those who did will remain grateful for the experience.