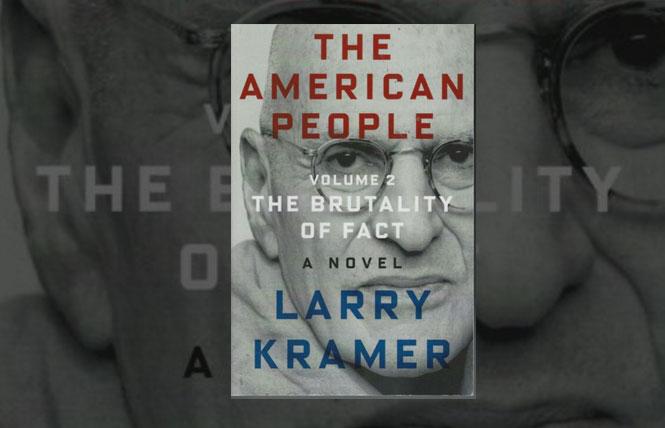 The American People, Volume 2: The Brutality of Fact by Larry Kramer; FS&G, $40

Any reader who dared to embark on the mind-numbing sprawl of novelist, playwright, screenwriter, and LGBT activist Larry Kramer's first volume of his "American People" series (2015) was met with a cacophony of American postwar themes and historical figures creatively transmogrified and amplified with little restraint. It featured Founding Fathers like Washington, Lincoln, and Franklin, as well as Samuel Clemens, all gay, who often found themselves embroiled in sexual situations.

In its concluding pages, that novel's omniscient narrator ("Your Roving Historian") was taken to the hospital to expire in peace from a mysterious rapidly spreading infection. He miraculously survives to resume this intrepid second installment, "The Brutality of Fact," which clocks in at a dizzying 880 pages. The page count seems as excessive as it did the first time around, but once a literary toe is dipped in, the pages flow, thanks to some creative arrangement of themes. Chapters are comprised of sections with their own titles as the story ebbs, flows, and in true Kramer style, overflows in grand fashion as the arrival of the AIDS epidemic is laid at the feet of an unsuspecting gay community. It encompasses Kramer's intimately personal "history of the plague I lived through, a brutality few ever dreamed of."

As the death count multiplies across the globe, AIDS remains its own menacing character in Kramer's narrative, chiming in at the most inopportune moments (in bold font, no less) to contribute snippets of self-congratulatory arrogance. AIDS guffaws at America's ignorance of the impending pandemic, "You're not smart enough to figure me out. Thank goodness."

Black humor and the outrage of a community that fights for human rights abound on every page, and Kramer, a gay activist known for his rage and outspokenness, succeeds at drawing attention to decades of persecution forced upon his community. The mudslinging may be cleverly disguised, but it's not obscured to readers who've sexed and suffered through the same era. Kramer is never shy about calling out media outlets who became gun-shy when it came to addressing AIDS as a plague about to decimate an entire population of homosexuals.

The New York Times ("The New York Truth") is treated with the same toxic venom as writers at The New Yorker ("The New Gotham"), Barbara Streisand, Yale University, and without reserve, George W. Bush. But the tome is not all vitriol, it also encompasses love stories, desperation, eternal friendships, loss, and the pain of global loneliness, even within a community that has had to band together tightly.

Alternately, Kramer also likes dick and writing about sex; many pages feature both. In essence, there's something for everyone here, if readers have patience. Self-indulgent, expository, overwritten, extravagant, sex-crazed, and crammed with casual asides and urgent digressions, Kramer's Vol. 2 is simply brilliant.