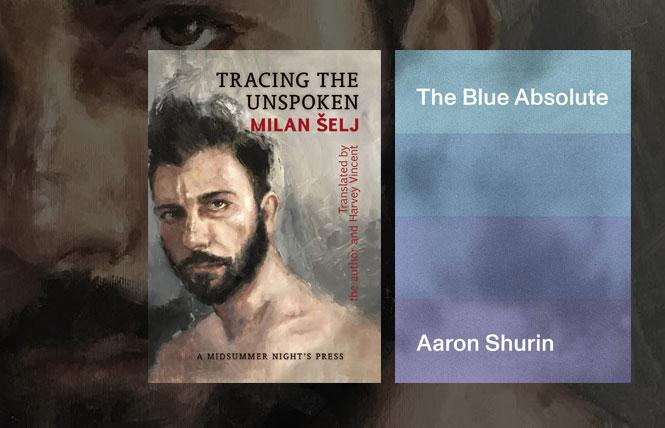 Prose poems are among our favorite forms of poetry to read. On the page they appear to be small, accessible samples of prose, but when you read them, there turns out to be more than meets the eye. There's mystery, something left unsaid, the beating heart of poetry behind them.

Two collections of prose poems began Out There's reading week. "Tracing the Unspoken" by Slovenian poet Milan Selj is a small chapbook of prose poems translated by their author and Harvey Vincent (A Midsummer Night's Press). "The Blue Absolute" is a new collection of prose poems by renowned Bay Area poet Aaron Shurin (Nightboat Books). Slim, undersized, they were easy to tuck into a pocket and dip into during the interstices between events.

In spare, highly concentrated paragraphs of poems, Selj explores gay desire in the face of a homophobic society. There is longing, release, tension, denial, everything you might get in a more complete exploration like a novel or a play, but here stripped-down, concentrated. OT can only reproduce small portions here.

"In his faded little flat I lay on a table among the remains of stinking food and dirty glasses. I kept squeezing my nipples so I would come quickly. Then I picked 20 quid from his fucking pocket."

"I smell sweet milky chestnut, while his quick trembling breath tickles my neck. At home my trouser leg betrayed me, stained with sticky drops."

"Slowly, like an elegant jackal, he sneaks out of bed, leaving behind the impression of a sensuous shadow. I let him steal the last word before he departs. His sharp fragrance floats in the air, enveloping my still-quivering body."

In Selj's sensual verse, there are passing shadows of Jean Genet, Jean Cocteau, Arthur Rimbaud. This is his English-language debut.

In "The Blue Absolute" Aaron Shurin is attempting something more lyrical, more cosmic. His prose poems float alongside and over the spurs to their observation as if liquid, spilled mercury along the page. Again, the merest excerpts from the poems, themselves miniatures:

"He sits at the bus stop in the spume of late sun — wind spreads light. His brain is dim in the warm flush: How does he come to attention mashed like a boxer, he whose face was articulate in the mirror of a dream as a being in love and light?"

The collection is offered in four parts; the last, "Shiver," is dedicated "for San Francisco." Over two stanzas of its first canto, we get: "Do you remember that hilltop above the hilltops where light fell like water to drench our wide-open faces and the whole thing

"spread out before us coast to Bay, rise and fall, as we locked hands to seize and store the image and our lingering kiss drew in the streets and parks and timbered houses and raw incendiary sky as if kissing were breathing."

The poem goes on. Reading it is as simple as tackling prose, but there's poetic sparkle and daring in it, as in all the pieces in the collection, the abstract melting into the particular.