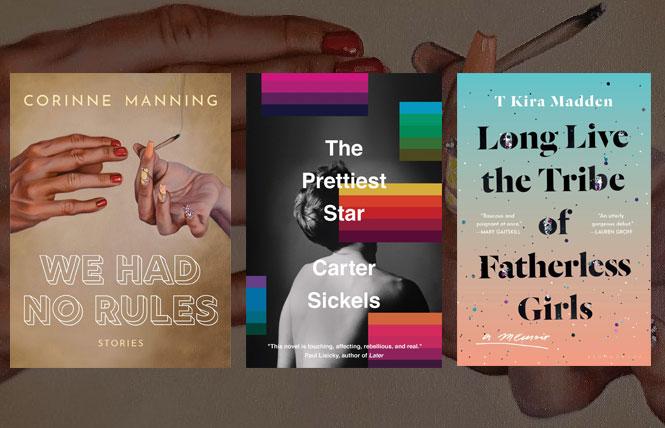 In anticipation of the change of seasons, here are some forthcoming books to add to your reading list.

Fiction section: The debut short story collection "We Had No Rules" (Arsenal Pulp Press) by Corinne Manning is notable for its varied cast of queer characters choosing between assimilation and rebellion.

Joshua Henkin returns with his fourth novel, "Morningside Heights" (Pantheon), described as "a sweeping and compassionate novel about a marriage surviving hardship."

Set in 1986, "The Prettiest Star" (Hub City Press), the second novel by Carter Sickels, follows Brian, who, after six years in New York and the death of his lover, returns to his family home in small-town Appalachia.

In his debut novel "Swimming in the Dark" (William Morrow), Tomasz Jedrowski takes us back to early-1980s Poland and the decline of communism. Ludwik and Janusz meet at a summer agricultural camp and begin an all-consuming affair in spite of the repressive Catholic society.

Scott Spencer, best known for his 1979 breakout novel "Endless Love," resumes where he left off from his 2017 novel "River Under the Road" in "An Ocean Without a Shore" (Ecco), revisiting romantic obsession in the story of Kip's fixation on straight, married Thaddeus.

"Vanishing Monuments" (Arsenal Pulp Press), the debut novel by John Elizabeth Stintzi, tells the story of non-binary photographer and professor Alani, who returns home after 30 years to deal with their mother, in declining health as her dementia increases.

Inspired by her visits to Mykonos, Laury A. Egan set her newest lesbian murder mystery "The Ungodly Hour" (Interlude Press) there, in a suspenseful tale of a photographer whose idyllic sojourn is disrupted by a series of murders.

Originally published in 1949 and reissued over the years, "Olivia" (Penguin Classics) by Dorothy Strachey, aka Dorothy Bussy, follows the title character from England to a Parisian finishing school where she is beguiled by her teacher, Mademoiselle Julie. The new edition features an introduction by André Aciman.

If you start reading Blake Gopnik's massive biography "Warhol" (Ecco) now, you may finish it by Christmas 2020. From the prelude, featuring the first time that artist Andy Warhol died in June 1968 after being shot by Valerie Solanas, to the chapters on his birth in 1928 to his untimely death in 1987, Gopnik is nothing less than thorough.

Part of the Avidly Reads series of short books on the effects of culture on how we feel, "Making Out" (NYU Press) by Kathryn Bond Stockton is a "memoir about a non-binary childhood before that idea existed in the world."

Now in paperback, "Long Live the Tribe of Fatherless Girls" (Bloomsbury), the debut memoir by literary essayist T Kira Madden, is the brutally honest story of her life as a biracial queer teen living in Boca Raton, Florida, with parents caught in struggles with alcohol and drug addictions.

Living alone in Hollywood, taking care of his mom and still looking for Mr. Right, gay comedian and actor Jason Stuart tells his story in "Shut Up, I'm Talking!: Coming Out in Hollywood and Making it to the Middle" (CCB Publishing).

"The Dairy Restaurant" (Nextbook/Schocken), written and illustrated by Ben Katchor, is an illustrated history of "where we choose to eat" as well as an "encyclopedic directory" of the once-thriving dairy restaurants of New York City.

"Outgrowing: Stories from the LGBTQ+ Community" (Writing Wrongs) is an anthology of interviews with photos, about people from Berks, Bucks, Cumberland, and Schuylkill counties in PA, crafted by 15 college students from PA, NJ and NY.