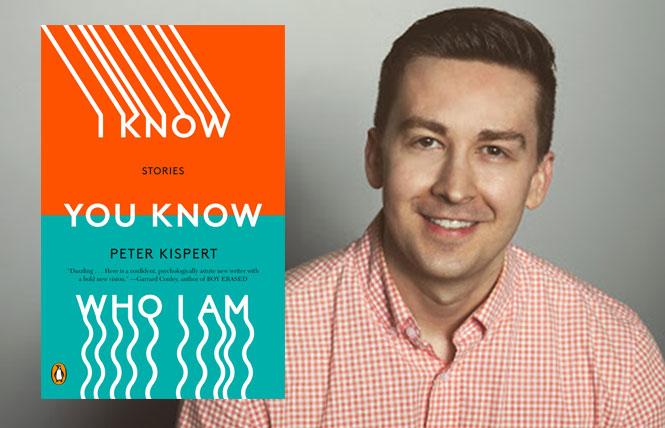 "I Know You Know Who I Am" author Peter Kispert. Photo: Courtesy Penguin

Two misfortunes, one likely unforeseen, attend the publication of Peter Kispert's new short story collection "I Know You Know Who I Am" (Penguin). The first is its coming hard on the heels of Garth Greenwell's story collection "Cleanness," with which comparisons could be drawn, but I have neither the space nor the heart. The second is that lying is its theme, its subject, its narrative, its genre, and there is reason to believe that readers in 2020 have had enough of lying.

Lies have always been central to fiction — the first paragraph of "Ethan Frome," for example; the first couple's answer to God in Genesis; all of "Anna Karenina," including that first sentence so famous and resonant people regularly misquote it — and it wouldn't take long to drum up a thesis that the essence of fiction itself is lying. Maybe Kispert is speaking for himself when he puts into the mouth of what turns out to be a main character the words: "I felt pale, vulnerable, caught in the crevasse between truth and fiction." Or of another: "So he kept talking, kept offering these gifts of exaggerated strangeness. It was almost generous, he remembered thinking."

The stories, some previously published, are here arranged in an order that induces the reader to expect that the fare will be gay romantic theatrics of a barbed, Wildean variety. "Breathing Underwater," one of the longest, most absorbing stories, is built on the premise that "Gavin held a golden memory of his first important lie. He remembered how the words had tumbled out in a way he almost couldn't control, how easy — even clean — it was to tell Erin before gym class that he could see the future, that he'd seen it before."

But it's not long until the reader is drawn away from the innate humor of wannabe actors being actors in their relationships and into the realms of Edgar Allan Poe, in stories such as "Rorschach." With some laugh lines along the way, it tells of staged live shows in which prisoners are used as actors in real onstage crucifixions, driving all other forms of local entertainment out of business. Almost generous!

Kispert is a taxonomist of lies and other forms of deception, ghosts without sheets. In addition to plays, there are dreams (mostly nightmares) and the practiced dishonesty of family discourse. A lesbian travels for her father's funeral but understands by the time she's hours late for the wake and still dressing in her Hitchcockian hotel room that it might be a better time for a swim, at a beach that would have done Tennessee Williams proud, with children spearing sand sharks. Former diving champ Gavin is literally tripped up in the shallows by a human skeleton whose ribs he is relieved not to have broken — unless it's all an illusion or just a terrible mistake.

Like Caesar his Gaul, Kispert divides his 21 stories into three parts: "I Know," "You Know" and "Who I Am." But a reader with my gullibility (I can come to the end of a whodunit and still not know who did it) might be well into "Who I Am" before it clicks that the characters have appeared before, sliced and diced in previous stories, and are now coming back to take their revenge some like some recombinant virus. Then, as anywhere in the endless tally of our impeached president's lies, you find that you're caught in what looked like a honeycomb but turned out to be a spider web; that despite your best intentions you've been tricked into reading one more; you're exhausted and demoralized.

The handful of short short stories, dropped in along the way like hailstones that usurp the narrative only to melt away as quickly, feel more experimental than essential. But some of the individual stories use fierce concentration to create narratives of real impact. A principal contender for main character, Finn, is made up, even in the context of the stories in which he appears. By "Who I Am," patent surrealism is the name of the game; the nerve ends of humor have been cauterized, and any remaining sense of pleasure is gone, overtaken by bewilderment, killed off by the certainty that you're the dupe.

Let me be clear: I'll read Kispert's next book. That he can write is not a lie. He writes sentences with the tails of scorpions and deploys vocabulary like IEDs. He's genuinely funny and as adept at a specifically gay male dialect of irony, neither fey nor fatal, as any writer I can think of. Remarkable as his skills are, it's his ambition that gets the reader down, by repeatedly feeling fleeced.

It's bedtime here, and I'm lying down with Anna Karenina, a woman I know well because Tolstoy I trust.