Colors in a Japanese rainbow 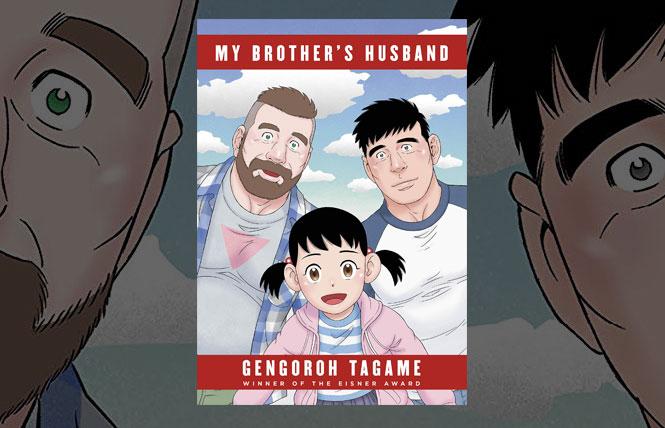 Japanese manga artist Gengoroh Tagame is well-known for his intricate drawings of men tied up in various forms of Japanese-style bondage and rope play. But he won the Japan Media Arts Award for Outstanding Work of Manga, and the Eisner Award for Best U.S. Edition of International Material, Asia, for his first all-ages title, "My Brother's Husband." Now that graphic novel has been published in its complete form (Vol. 1 & 2) in a colorful paperback, translated from the Japanese by Anne Ishii (Pantheon Books).

It's the story of Yaichi, a single dad living in contemporary Tokyo with his young daughter Kana. One day a large Canadian visitor, Mike Flanagan, appears at their home and announces that he's the widower of Yaichi's twin brother Ryoji. Estranged from his traditional Japanese family, gay Ryoji had left Japan 10 years previously, and had been living and happily married to Mike in Toronto.

Yaichi and Kana take in this plus-sized Gaijin (foreigner) so that Mike can find the places in the neighborhood Ryoji had told him about from his boyhood. Gradually his Japanese hosts come to think of Mike as the family he has become to them — for Kana, he's her giant Canadian uncle, and for Yaichi, his gay brother-in-law.

Sweetly, Kana comes to love and full acceptance first, learning to take part in the Western custom of hugging friends hello and goodbye easily. At first it seems strange that such a young and vulnerable girl should come to love such a big and hulking stranger, but later the reader learns that she keeps a collection of lovable teddy bears, and Mike, with his full beard and big, hairy frame, is nothing if not one of them.

Yaichi has a longer road to love and acceptance, but he gets there. He begins by believing that "Men marrying each other is weird" but ends up understanding that his twin brother had a loving marriage with Mike, and regretting having become estranged from him.

This intimate story is told against the backdrop of contemporary Japan, which, while modern in many ways, still keeps the trappings and habits of mind of the traditional culture. So we meet a young man who is still struggling with his sexuality, and a contemporary of Yaichi's who can't go public with being gay. By the novel's end, Yaichi is working on raising the consciousness of Kana's schoolteacher, calling on him to accept the presence of her Canadian uncle.

It's a heart-warming tale, told with a minimum of language but 704 pages full of wonderful pictures. Given Tagame's background in illustrating Japanese bondage techniques, it's no surprise that Yaichi's gym physique and Mike's bearish bulk are rendered in such loving detail when they emerge naked from the bath or hot spring. But except for a slightly shocking episode when Mike, coming home after drinking, grapples with Yaichi, reminded so much of his mirror image Ryoji, the book isn't concerned with the erotic impulse. It's a story of family, acceptance and personal growth, and easily transcends cultures. Highly recommended for Japanese and Gaijin alike.