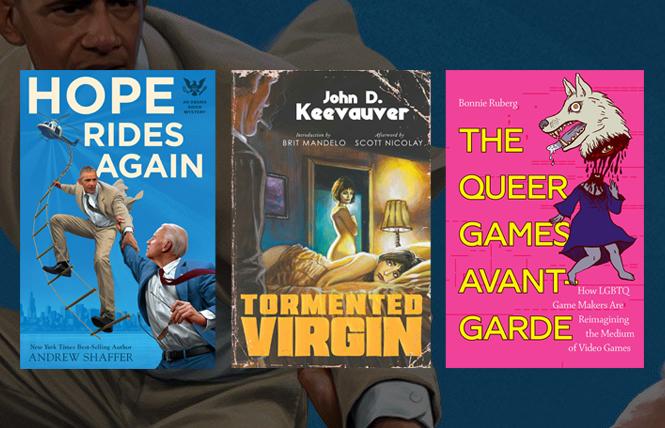 We don't always get to read all the review copies of books that pile up on the Arts Desk. But here are a few representative passages from some new offerings that we have enjoyed.

1. "Physical domination may sometimes involve struggle or physical force, but it doesn't always have to. I've seen a very small woman hold her very large submissive partner up against a wall with a single finger pressed lightly to his chest." — "The Dominance Playbook: Ways To Play with Power in Scenes and Relationships" by Anton Fulmen (Greenery Press).

2. "Jeff interrupted whatever they had been talking about and launched right into the story about Kelly and the Spectrum sign.

"'And then that lesbo tried to tell me that I was harassing her!'

"'And before you answer that,' said maybe-Mark, 'you oughta know my aunt's a lesbian.'

"Barack shushed me again. The look on his face said it all. Too bad. It was quite the story, and I couldn't guarantee I'd be in the mood to tell him later." — "Hope Rides Again: An Obama/Biden Mystery" by Andrew Shaffer (Quirk Books).

4. "Mickey Jessup smirked down at Faye. She was dressed in slacks and a shirt and tie. Her hair was combed flat-back, mannishly.

"'It took you long enough to get around,' she said to Faye. She glanced at Gene. 'Hi, Little Boy Blue. What are you doing in here? The place for queer men is down the street. I know; that's where all my husbands ended up.'" — "Tormented Virgin" by John D. Keefauver (Lethe Press).

5. "When a pair of players sits down to play 'Consenticle,' they embark on a sexual encounter between a human (Kit) and a large, blue-skinned, tentacle alien (Dup). The players' goal is to reach mutual sexual satisfaction. To do this, they attempt to interact with each other in complementary ways — such as by licking, touching, penetrating, or enveloping one another at the right moments — without complete knowledge of the other's desires." — "The Queer Games Avant-Garde: How LGBTQ Game Makers Are Reimagining the Medium of Video Games" by Bonnie Ruberg (Duke Univ. Press, 4/20).

While we're in a literary mood, congrats go out to the folks who put on the literary festival Litquake, which was recently a clue to a "Daily Double" on "Jeopardy!" It read: "This California city is home to Litquake, which celebrated its 20th anniversary on 2019." Answer in the form of a question, please!

"What is San Francisco, Alex?" A question we've been asking ourselves since we moved here in 1983.

"Correct! Litquake is San Francisco's literary festival. Next dates are Oct. 8-17, 2020, with workshops and programs throughout the year."