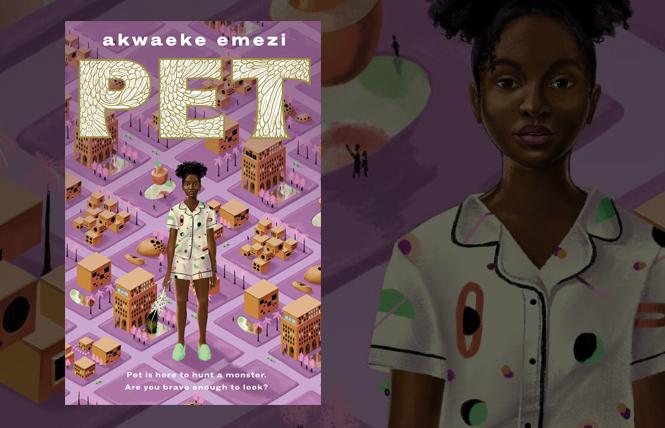 "Freshwater," Nigerian-born author Akwaeke Emezi's debut novel, caused a stir in 2018 with its vivid depiction of a West African girl with split identities migrating from Nigeria to America. They instantly became an emerging literary writer to watch.

"Pet," their creatively exceptional sophomore effort and a finalist for a National Book Award, reflects a daring and surprising move to Young Adult territory with a story set in the city of Lucille, a utopian place where lethal hovering monsters were alive in the past. They've all been eradicated by an army of angels.

Born after the monsters lived and died, Jam, a selectively mute transgender teenager, and her best friend Redemption have believed this victory over evil to be true, but things soon change in this imaginative narrative. The story comes to horrific life when Jam's mother Bitter, a painter, creates a tapestry of angels and monsters as a reminder of what was once a large part of life in Lucille. "Forgetting is how the monsters come back," Jam thinks to herself.

When a bleeding scratch on her hand drips a drop onto the painting, a menacing monster, an eyeless creature with horns, claws, and chest fur named Pet, comes to life to wreak havoc on Jam, her family and friends, and the entire population of Lucille. Human and monster share a telekinetic connection whereby Jam learns that Pet's purpose is to hunt and uncover a monster that still remains cloaked from exposure in Lucille, who wasn't killed off by the angels.

The monster's identity comes as quite a surprise in a novel that's as entertaining as it is engrossing. The citizens of Lucille reiterate their commitment to each other by shouting across the plains, "We are each other's magnitude and bond."

Emezi's publisher, Make Me a World books, is a diversity-focused imprint of Penguin Random House committed to bringing fresh literary voices and perspectives to mainstream audiences. Now that "Pet" has published, Emezi, 32, is fulfilling a two-book deal with Riverhead Books, the first of which, "The Death of Vivek Oji," is scheduled for a 2021 publication.

Steeped in African and Caribbean culture, their young adult fantasy novel is a moving representation of human wizardry and reflects themes of individualized strength and power, community solidarity, the joy of uncommon friendships, and the personal power of embracing one's own trans identity.