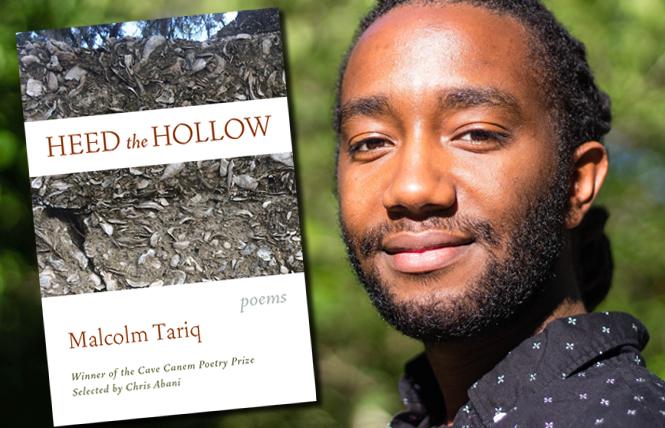 A man I was with in the 1970s, white like me, had a passion for early-20th-century American popular music that kicked this opera queen's butt. I didn't have to be converted, but it was an incalculable benefit that his preference was to listen to the music on 78s on one of two Victrolas — arguably my first induction into "original-instrument" performance. The songs were more resonant, more lunging at you, played that way.

A favorite was "Ma Rainey's Black Bottom" by the polyamorous blues singer of that name, hymning her big black ass. So when I read about Malcolm Tariq's new poetry collection "Heed the Hollow" (Graywolf Press), with three poems entitled "Malcolm Tariq's Black Bottom," I was there. I read about it in an interview with Tariq in The Rumpus. It's a history-saturated paean to being a proud gay black bottom. No puns or stereotypes intended, it's as uplifting as sobering.

A Georgia native who began to explore his sexuality when he went to the University of Michigan in 2013, where he got a Ph.D. in English Literature, Tariq melds offense and outrage with acceptance and celebration in his reckoning with bottoming. Invoking my own experience one last time before butting out, because there's as much lint around the back door in 2020 as there was when Ma Rainey issued her anthem on a "race record" in 1927, heeding the hollow is as serious a business as ever.

The killer smile in Tariq's author pix can't be faked, and the qualified exuberance in his poems is sounded in the first lines from "Power Bottom," the first of two same-named poems that frame the set: "In church, we said Satan get thee behind, and I always laughed."

"I don't hate the South," he writes credibly, "I hate its longing/to forget ruin./I hate its calling of my not name." In "Malcolm Tariq's Black Bottom," there's bittersweet wordplay that ends, "You cannot have/cake cake/Although/you may eat it."

There's both invitation and defiance in "Commander, when I tell you to/fuck me, I don't mean/for your tree to drop in a spirit-filled/chamber of burning flesh./I mean grow a thicker root." 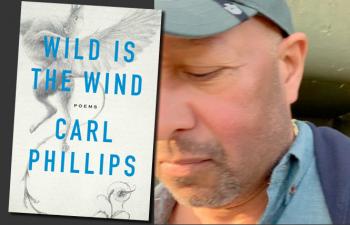 If you're gay and you read, there's no getting around Garth Greenwell's big bottom these days, but his legendary generosity toward colleagues has resulted in a powerful essay, "Cruising Devotion: Carl Phillips," for the new issue of The Sewanee Review. It has appeared simultaneously with Phillips' latest poetry collection, "Wild Is the Wind" (FSG). Let's call it serendipity, not coincidence, that Phillips' poem "Hymn" ("When I think of desire/it is in the same way that I do/God"), which Greenwell often cites, is an epigraph for "Heed the Hollow."

At 60, Phillips is the more seasoned poet, with yet another volume, "Pale Colors in a Tall Field," due out in March. His poems have been explicitly sexual and not denying of gay self-hatred. The greater complexity and formal variety, boasting immediate readability, of the poems in "Wild Is the Wind" give them substance that resists excerption. There's less explicitly sexual material than in earlier poems, but it's more than compensated by a different sense of the past as carried in the body. In "What I See Is the Light Falling Around Us," he begins, "To have understood some small piece of the world/more deeply doesn't have to mean we're not as lost/as before."

In the arresting title poem, Phillips observes, "Though lately it's less the echo/itself that can still most surprise me about memory/it's more the time it takes, going away: a mouth opening/to say I love sex with you too it doesn't mean I wanna stop/my life for it, for example; or just a voice, mouthless,/asking Since when does the indifference of the body's/stance when we're alone, unwatched, in late light, amount/to cruelty?"

"Wild Is the Wind" is for getting lost in.