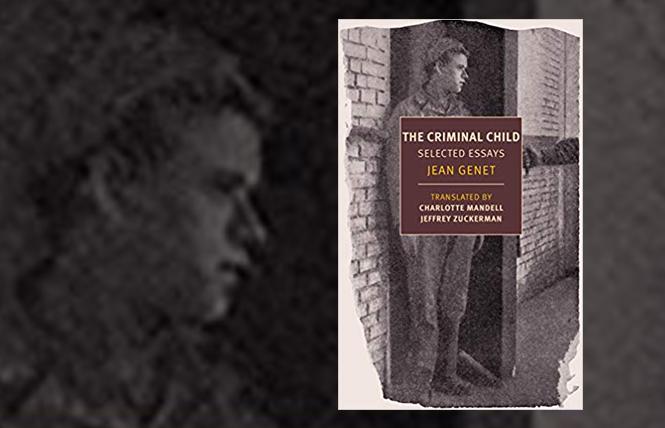 Jean Genet (1910-86) wrote in fragments, beatific subsets of his imagination where crime and beauty blur in a single artistic tableau. "Be a Sublime whore," he commands his muse, an imagined entity outside the body; that which is touched in waking dreams.

"I watch you in the Turkish baths where you thought of prostituting yourself — waited for, offered, conqueror, infernal among those oily and wounding bodies, traveling through silence and illuminating it by: your teeth, your eyes, your cynicism, that mass of white, sweaty steam."

Genet's mother was a prostitute in the streets of Paris who abandoned him to an orphanage at seven months. He was raised in state institutions and charged with his first crime at age 10. The first appearance of the essay that shares this book's title, "The Criminal Child," is a rare work; the eight essays in this new collection were selected from Genet's finest essays and reflect the mind of a man deeply affected by early life.

Genet wrote the essay in 1948 for a radio address on the French juvenile penal system and reforms to that system proposed by the French Government. The broadcast never took place because, in a serious and surprise move, Genet opposed the reforms, preferring to praise the juvenile criminals cast aside. Genet insisted on retaining the names "Penitentiary" and "Prison" over "Moral Rehabilitation Facility" and the more debasing "Home for the Rectification of Delinquent Youths." He insisted children, and criminals generally, experience the force of their punishments as the rehabilitating effects; he resisted softening the effects, which he believed gave way to moral decline. Underneath Genet's premise lies pure exaltation of the criminal elements of society: an acceptance of the radical artistry of real or imagined villainy. As curious as his analysis may seem, he worked to uphold and even ennoble crime and beauty.

"The reasons for publishing were simple enough: the title piece was an uncollected and untranslated and utterly characteristic work of Genet's — a magniloquent piece of pure provocation that spoke to where he came from and where his heart remained as much as anything he wrote — and I thought it deserved an audience," said New York Review Books Editorial Director Edwin Frank, who chose the collection's eight essays, translated from the French by Jeffrey Zuckerman and Charlotte Mandell.

"For working with Genet's prose, it's much more baroque and underhanded than that of most French writers," said translator Zuckerman. "That meant having to be alert to various senses and nuances, and figuring out how to mimic Genet's sneering in an English as fluid as his French." Zuckerman went further in bringing Genet's ideas and perceptions home into the queer arena. "It's valuable for understanding the reluctance that some members of the LGBTQ+ community feel about gaining acceptance within society. I personally find 'The Criminal Child' useful as a window into the history and evolution of present-day queer culture." It's an account of a child "rebelling not just against conventional morality, but against identity itself."

The queer essay "Adame Miroir" shines with Genet's description of a ballet set in "an extremely sumptuous palace; the hallways covered with beveled mirrors. On the ceiling: rich, heavy chandeliers. No fabric on the walls, just gold, marble, glass," he wrote. The ballet's main character "is a sailor who has no past. His life begins with the choreography, which utterly contains it. He is young and handsome. A rose is slipped by its stem into his leather belt." It was translated by Mandell, who said, "It's now over 60 years since Genet's great queer novel 'Our Lady of the Flowers' was first published in English." Genet's queer masterpiece changed forever the register of homosexual literature "from the apologetic or slyly allusive to the actual, even the triumphal." Genet wrote many essays, some of the best contained in the new collection, showing his "precise and tender evocation of his own lover in 'The Tightrope Walker.'"

Genet consistently broke lyrical conventions, creating a narrative approach as a stream of his unique consciousness, unexpectedly poetic. The collection "The Criminal Child" examines homosexuals' connection to crime, punishment, and our own queerness. His language, provocative and queer, reminds us that Genet was his own creation. After "The Criminal Child" was banned in 1948, he concluded, "Already the papers are furious that a thief and a homosexual should be granted a public forum. So I am no longer allowed to go on-air before the nation." In this collection, Genet retakes the literary stage.