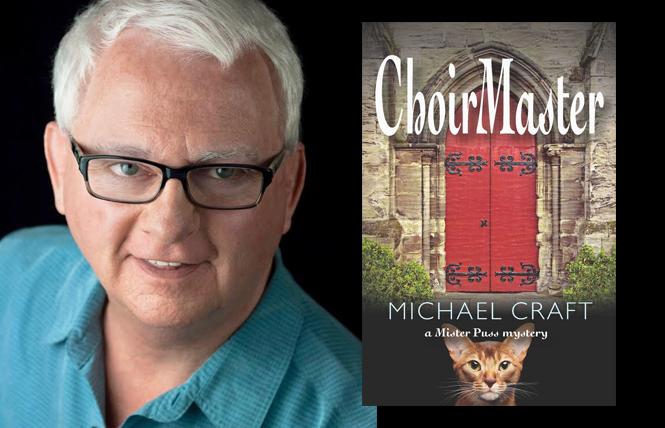 What's it like to be an openly gay couple living in a small town in the Midwest? If the picture Michael Craft paints of Dumont, Wisconsin in "ChoirMaster" (Questover Press, $24.95) is any indication, not too bad, except that gay men are being murdered. In that sense, Dumont is like St. Mary Mead, the idyllic English village that's home to Agatha Christie's Miss Jane Marple: a place where dead bodies are frequently discovered.

Brody Norris and his older husband, Marson Miles, are architects with a successful practice in prosperous Dumont. They are accepted as a married couple and have a circle of straight and gay or lesbian friends. They have designed their dream house, and it's being built by a local contractor. Meanwhile, they are living in a stylish loft home.

Marson's old college friend, Curtis Hibbard, who is gay, and his wife Joyce rather unexpectedly shake things up in Dumont. Joyce, known as Mother Hibbard, has come to town to serve as the Rector of crumbling St. Alban's Episcopal Church, which she hopes will be restored. Renovating the 19th-century building will be expensive. She's therefore delighted when Brody and Marson invite her to a catered dinner party at which another guest is the town's wealthiest resident, Mary Questman. The Questman family was instrumental in building the church. Other guests include Curtis' friend Yevgeny Krymov, a sexy Russian ballet dancer. He's clearly attracted to Brody. The feeling is mutual. Also attending is David Lowell, the openly gay Choir Director at St. Alban's. Curtis, a successful lawyer, lives in New York. He entices David to return with him to Manhattan. The bait? A ticket to a Renee Fleming concert. David agrees at once.

Mary has an Abyssinian cat named Mister Puss. She swears he talks to her. He warns her to hold on to her purse whenever Mother Hibbard is near. When Mary leaves town for a holiday, Brody and Marson take care of Mister Puss, who is happy to be with them. At times, Brody senses that Mary is right about the cat's ability to communicate.

David is found dead in St. Alban's, which also barely survives a fire. The fire means the church members will have to decide to rebuild or design a new house of worship. Neither alternative will be cheap.

An autopsy reveals that David died from an allergic reaction to nuts, which may have been in the macaroons made by the church secretary, Lillie Miller. Was it an accident? Everyone knew about David's allergy and the risk it posed to him. But Lillie had a crush on him and was perhaps frustrated that her feelings were not reciprocated.

Then an openly gay television personality in nearby Green Bay is also murdered. Is this a coincidence? Or is there a link between the two deaths? Stumped, Sheriff Thomas Simms asks Brody to help. Brody had solved an earlier murder. He reluctantly agrees. Local reporter Glee Savage, a close friend of Brody's, naturally wants the story.

David had been a trust fund baby. The fund has been managed by well-connected banker Bob Olson. David controlled his younger brother Geoff's allowance, which he doled out sparingly because of his sibling's irresponsibility. Geoff, desperate for money, arrived in Dumont with his sickly girlfriend and a mangy dog. He wanted an advance from David. With David dead, he has become a wealthy young man. Brody knows that following the money is generally a sound idea when looking into murder.

Although the plot unfolds unhurriedly but engagingly, it's the characters that shine. Brody and Marson have a solid relationship. Brody acknowledges his attraction to Yevgeny, but knows that he won't act on it. Craft effectively captures the rhythm of a longterm married couple's relationship: their bantering, their affection, their pride in each other, yet allows them to remain distinct individuals. He's also good at showing how the age difference can complement their perspectives.

He is equally adept at creating other believable characters. Craft knows small-time life and describes its charms well. The quiet streets, the fresh air, the familiarity. But at times Dumont seems a bit idealized. Racially and ethnically diverse characters (Simms is black, a local doctor is an Hispanic woman, the city building inspector is an African American lesbian) all get along well. Surprisingly, this adds to the novel's appeal. Had Craft introduced racial, ethnic or homophobic tensions among the locals, it would have distracted from the mystery.

Still, when Brody and Marson wake up one morning to discover homophobic graffiti on the outside of their house, they realize that danger lurks behind Dumont's peaceful facade. A deputy sheriff is posted to guard the house, which adds to their anxiety.

Brody, like a good amateur detective, pays attention to details. That habit leads him to reveal the killer in a classic scene in which all the key characters and suspects are gathered in Sheriff Simms' office. The resolution is clever but plausible. Craft plays fair: the clues are carefully planted for the reader to see. He avoids giving Mister Puss supernatural powers — he may only be a sounding board for Mary and Brody's own thoughts. Yet he is an exceptionally smart cat, which makes him a welcome presence that isn't cloying. It's a tricky balance, handled well.

This is a new series from Craft, who previously authored the Mark Manning mysteries. It's a welcome addition to the genre.