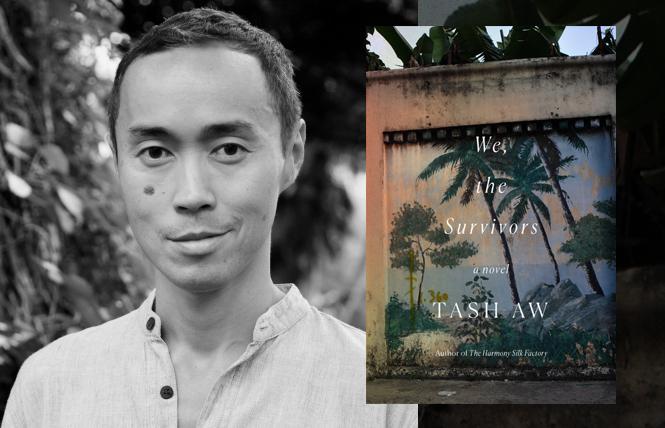 There's so much to appreciate in Tash Aw's new novel "We, the Survivors" (Farrar Straus Giroux) that a deep plunge into its contents might overlook how remarkable the writing is. In his fourth novel, the out, Taipei-born, Malaysia-raised, well-traveled, now London-based writer of Chinese descent tells his new tale in English of such forthright, disciplined subtlety that, like the orchestra in a great opera performance, you nearly overlook it because it is so essential to the story.

Along the way it is so eloquent about the poor so always with us we don't see them, the climate crisis that hits them first and hardest, the relentless cruelty euphemized as inequality and the cataclysm of displacement that soon enough will drown all of us that it would be easy to miss the mastery with which Aw builds and reconstructs his plot. The constant is the harsh exploitation of migrant workers, some of whose employers don't regard them as having lives in the first place, a story with gathering currency as the world's refugee population tops 50 million.

Aw is the first author in my reading experience to include the Rohingya, pronounced every which way by news anchors but Roh-HING-gya by the Rohingya. Their plight has finally made it to the docket of the International Criminal Tribunal in The Hague, where light will finally be cast on the Burmese generals engineering Rohingya genocide. The substantive nonfiction literature about the Rohingya is accessible to lay readers but still largely the province of the "development" establishment.

"We, the Survivors" makes real people of the Indonesian, Malay, Burmese and Bangladeshi laborers who chase survival itself across the punishing geography of Southeast Asia. Forty pages from the end, Aw names the Rohingya refugees his protagonist Lee Hock Lye, familiarly Ah Hock, himself a one-time toiler in the migrant-dependent fishing industry, seeks out of his desperation and theirs — only to learn that the only work they're deemed fit for is, literally, digging their own graves.

Among its several guises, "We, the Survivors" is a murder story whose bare plot essentials are spelled out in the first few pages. Recently released from prison for the act when we meet him, Ah Hock is lying low, less hiding than making such capital as he can from the concrete lessons of depredation his hardscrabble life has taught him.

In a narrative device that narrowly skirts awkwardness, we hear him tell his life, first-person, to a New York-based Chinese Malay lesbian who is recording his story for her Ph.D. dissertation. Her real, not just relative, privilege grates, as it is meant to, despite her practiced political correctness.

Then, in the novel's final pages, Aw makes it pay off when Su-Min, having determined that her work will be a better and more lucrative novel, invites Ah Hock to the book-launch party, at which his felony is rewarded with applause over expensive booze and canapés. He walks away, into the night, with the reader in grateful tow, applauding his hard-won self-respect.

My apologies as warranted for the spoilers, but Aw builds his story not just to that glamorous party but, finally, to a full account of the murderous act itself, in all its eerie, out-of-body gore.

Two of the book's women — Su-Min and Ah Hock's wife, Jenny — are believable and three-dimensional subsidiary characters. However inevitable in an Asian-themed novel, his mother is anything but the harridan Chinese mother but, rather, a woman who works herself literally to death, smiling through crippling stomach cancer.

The only other Anglo-Asian novelist with Aw's acumen in depicting the poor, and the desperate poor in particular, with empathy that somehow transcends self-pity and UN sloganeering is Neel Mukherjee (and once-upon-a-time, pre-celebrity Salman Rushdie). Their subject is lives literally beyond the imaginations of people who read books and attend their launch parties, and it's their language that carries their message.

"At first I wanted to protect her from these stories," Ah Hock says of Su-Min near the end, "but as I was talking I realized that I wanted her to be a part of that pain, to make sure that it seeped into her world, her clean, happy world."

Aw, through Ah Hock, is clear-eyed and plain-spoken about toiling "in the sun in jobs like that." "Somebody is giving you orders, so you obey. Your body obeys what you tell it. Your movements are swift, instinctive. Harsh, even. They are harsh because what you are engaged in is a battle — a battle to finish the job before it finishes you."