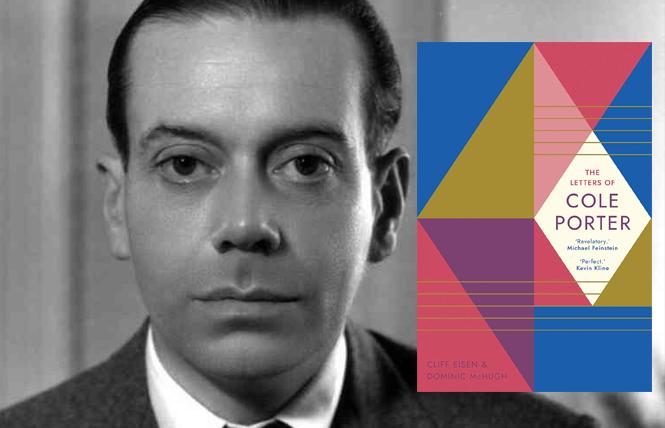 "The Letters of Cole Porter" weighs in at over 650 pages with notes, but it's really meant to be read in toto only by scholars and Porter completists, so the general reader can feel okay about selective skipping. His correspondence consisted mostly of working out the details of his lyrics or orchestrations with colleagues, and making sure he got paid when his songs were used in revues and, later, commercials. But there's much to be gleaned from the letters, too, about his private life.

Though he was happily married and generally considered closeted in his professional life, Porter (1891-1964) was surprisingly revealing in private communiqués. To a young lover: "Oh Boris, write me and tell me that you love me as much as I love you. You can't say it too often, because you are so far from me and it makes me so miserable." Letters to his close friend Sam Stark also refer frankly to his homosexuality. Editors Cliff Eisen & Dominic McHugh note, "He refers to a lover (Michael Pearman) and mentions Gore Vidal's gay novel 'The City and the Pillar' (1948). Here is confirmation that although Porter kept this part of his life private, he was sexually active, promiscuous, and apparently not particularly repressed about his sexuality."

Knowing this, it's fun to read the principal at Cole's grade school, the Worcester Academy, caution his mother in a letter, "He does not go with bad boys but he goes with those considerably older than himself who, while they do not exactly pet him, yet show their kindness toward him in a marked way. There are some delightful boys in his own class it would be far better for him to know, but his cuteness and brightness and versatility commend him to older boys."

In 1942 Porter opened, with financial backing, the 1-2-3 Club at 123 E. 54th St. in NYC, "apparently a safe meeting place for Porter and other homosexuals." He wrote to apparently desirable men, asking them to meet him there. To Monty Woolley ("Dear Beardie") he wrote, "It was very nice to get your drunken telegram this morning and to realize that you haven't improved in the least."

Cherry-picking some juicy parts: On F. Scott Fitzgerald: "I knew him first when he was a most attractive cock-teaser. Later I knew him with Zelda. They were both exhibitionist drunkards + when I saw them anywhere in Paris, I always made a quick exit for I knew that if I stayed, this would implicate me in a possible police raid."

"The cook is pure French with an ass so big that I can't understand how she keeps her balance."

"Please tell Jane Rubin that I should be very interested in working on a musical version of 'The Barretts of Wimpole Street' if she can guarantee me a singing dog."

"I am sending you, from Liberty Music Shop, the most popular record in the country, titled 'Doggie in the Window.' To me, this is the most repulsive song that has ever been written."

For such a genius writer of the Great American Songbook, it's easy to forgive Porter the candor of his correspondence and the snobbery of his opinions.