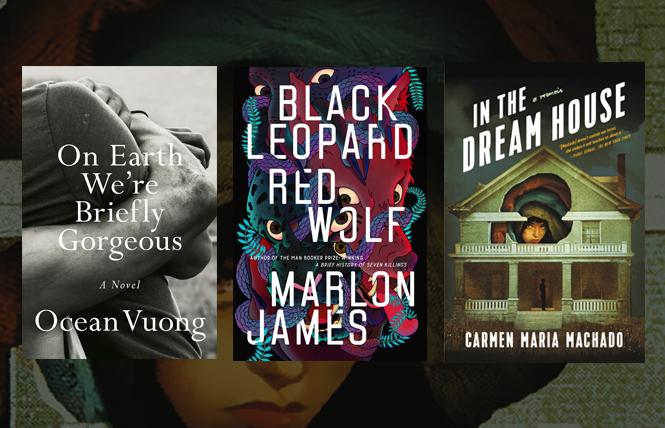 I don't at all restrict my reading to LGBTQ authors and topics, but I could have in 2019 and still had an extraordinary reading year. The "What Was That?" Award of the year goes to Ocean Vuong's "On Earth We're Briefly Gorgeous" (Penguin), a book deemed a novel by dint of its defiance of genre. This incantatory, memoir-like prose-poem about being a Vietnam-born Asian-American queer could, by the 31-year-old Vuong's own account, be his last book, but his having snagged a MacArthur Foundation Fellowship later in the year could give that the lie.

Book of the Year by an Earthling goes to Damian Barr's debut novel, "You Will Be Safe Here" (Bloomsbury). An astonishing interweaving of the horrors of South Africa's First Boer War and a history-based but present-day South African "Boy Erased" hauls the past into the present and the reader into a deeper, ever-more-knowing humanity.

Marlon James put earthly concerns aside in "Black Leopard, Red Wolf" (Riverhead), another genre-defying novel. A mythical, proto-African fantasy, it did the film "Black Panther" one better and is on the way to being a film of its own. Nicole Dennis-Benn, his Jamaican-born fellow traveler, followed her "Here Comes the Sun," about the homeland, with the equally fine novel "Patsy," about the trials of the Jamaican queer woman as an immigrant to America.

Unsurprisingly, the theme of immigration was as prominent in queer writing this year as it was in the dreary national and international "dialogue" on the issue. Pajtim Statovci's "Crossing" (Pushkin Press), the second novel by this Finland-resident Albanian-Kosovan, and Ahmad Danny Ramadan's "The Clothesline Swing" (Indigo Press) added their singular voices to the growing queer Muslim immigrant literature.

The same fine balance between the comic and the tragic bound the various voices in Jeanette Winterson's "Frankissstein: A Love Story" (Grove Press), riffing on the futurism of Mark Shelley's classic "Frankenstein" and some present-day characters toying with the implications of AI and sexuality in our own "post-human" future. Caleb Crain's second novel "Overthrow" (Viking) ran matters of internet security, the surveillance state and the good old-fashioned conundrums of human romantic relationship through the prism of a highbrow comedy of whatever's left of what we used to call manners.

Dustin Lance Black's memoir "Mama's Boy: A Story from Our America" (Knopf) gave a thoughtful review of the life and times of the Oscar-winning gay activist and screenwriter. But in a way that Black clearly hasn't minded, his saga of his fearless mother Anne, a gravely disabled woman for whom everything was hard but also fair-won, not incidentally her acceptance of her son's sexuality, has for most readers been the book's real knock-out.

Carmen Maria Machado's "In the Dream House" (Graywolf Press) is, among many other things, a deep investigation of the still-cloaked matter of lesbian domestic abuse. But like many of her queer colleagues discussed above, she has pushed out all the struts on the memoir form to provide a harrowing account of her own experience of an abusive (if in her case not physically so) lesbian relationship, her part in it, and the never-ending path to recovery that includes eyes-wide-open participation in a loving, healthy lesbian partnership. Despite the fact that her book is not "about the writing," it is writerly to the nth degree and frequently breathtaking in its eloquence.

Our queer brethren and sistern wrote some of the best-selling nonfiction books of the year, further distinguishing themselves for having taken time away from the public demands of their celebrity to write these books, splendidly, themselves. When I approached my editor about reviewing Pete Buttigieg's "Shortest Way Home" (Liveright), we had no reason to think that he would race beyond dark horse in his out candidacy for the presidency. But the book distinguished itself among books by campaigning politicians by giving full voice to the evolving gay experience of a man whose supporters find him inarguably true to his word.

In the year's final quarter, and in close succession, Rachel Maddow's "Blowout: Corrupted Democracy, and the Richest, Most Destructive Industry on Earth" (Crown), Ronan Farrow's "Catch and Kill: Lies, Spies, and a Conspiracy to Protect Predators" (Little, Brown) and Christopher Wylie's "Mindf*ck: Cambridge Analytica and the Plot to Break America" (Random House) sold out pre-release, became major bestsellers and kept woke readers woke farther into the night than they intended.