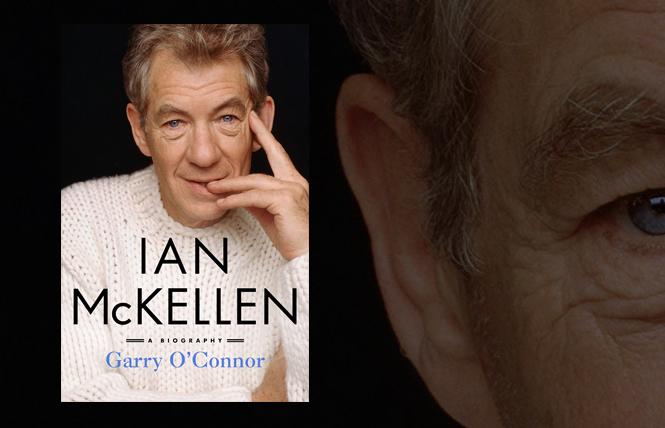 Among LGBTQ people, Ian McKellen is almost God. In 1988, he was among the first actors of stature to come out publicly, spurred on by the AIDS crisis and stopping Clause 28 from being enacted in the UK, which would have made it illegal for local authorities to promote homosexuality or give money to anybody who did. While McKellen's homosexuality was an open secret in theatrical circles, during an appearance on a BBC Radio 3 program debating this legislation, he publicly revealed his gayness, becoming the cause's leading figure. In an era of few major openly gay celebrities, McKellen's declaration inspired other actors to self-out in the controlled environment he chartered. He would later tell New York Times theater critic Ben Brantley that coming out was "the only thing I've ever done. That will be the obituary."

Timed to coincide with McKellen's 80th birthday this past May, O'Connor's biography vividly describes this historic moment, including the impact of the discussion McKellen had with gay novelist Armistead Maupin the previous year, deciding that being an openly homosexual actor of his caliber and age (near 50) wouldn't limit him in Hollywood. McKellen's activism for the LGBTQ cause over three decades is also highlighted in this affectionate yet opinionated biography.

O'Connor, an acclaimed biographer of Laurence Olivier and Alec Guinness, a novelist and director (of McKellen in his early roles), befriended McKellen during their student days at Cambridge in the 1950s. In 2006 he asked him if he could be his official biographer. McKellen replied, "If I did it with you, I'd be wasting your time, my time, correcting, disputing and changing things. I can't stop you. Write it after I'm dead." In 2016, McKellen returned a 1.2 million pound advance to his publisher after agreeing to write his memoirs, with the disclaimer, "It didn't seem very interesting to me. I don't want to go on a voyage of discovery." O'Connor wrote his book without worrying about McKellen's approval.

Born in Lancashire, the son of a strongly Christian civil engineer, McKellen was scarred for life when his beloved mother died of breast cancer when he was 12. His relationship with his father was rocky, tragically ending when he died in a car crash after attending his son's 1964 London stage debut. McKellen attended Cambridge. O'Connor outlines his triumph in a 1976 Royal Shakespeare Company performance as "Macbeth," co-starring Judi Dench; his American breakthrough and Tony Award for Salieri in "Amadeus" (1980); the doomed gay concentration camp victim in Martin Sherman's "Bent"; Iago in "Othello"; a Fascist-era "Richard III" onstage and onscreen; and "Waiting for Godot" with Patrick Stewart. McKellen didn't attain film success until his late 50s, as Magneto in the "X-Men" series and gay Hollywood director James Whale in "Gods and Monsters." But his most famous role is Gandalf the Wizard in "Lord of the Rings" and "Hobbit" films, which made him rich. The last two roles got him Oscar nominations, though McKellen felt he lost due to Hollywood homophobia.

O'Connor explores McKellen's two longterm relationships, with history teacher Brian Taylor in the 1960s; and actor-director Sean Mathias, who felt "very much in Ian's shadow," in the 70s and 80s. We learn McKellen had an unrequited crush on Cambridge student Derek Jacobi, with whom he's had a friendly rivalry for decades, finally working together as a bickering elderly gay couple in the 2013 ITV series "Vicious." McKellen had an affair with gay actor Gary Bond (who later died of AIDS) in the last years of his relationship with Taylor that ended their partnership. Surprisingly, we read about a young newcomer, Rupert Everett, who stalked McKellen in 1976, leading to a brief affair.

Laurence Olivier was his idol. McKellen was knighted in 1991. O'Connor uses anecdotes, a chatty style, controversy and criticism to keep readers' interest. Yet despite reminiscences with directors and actors, he remains an enigma. While not definitive, this book will remain the go-to compendium for a remarkable career of the man Out magazine called one of the most influential in LGBTQ history.