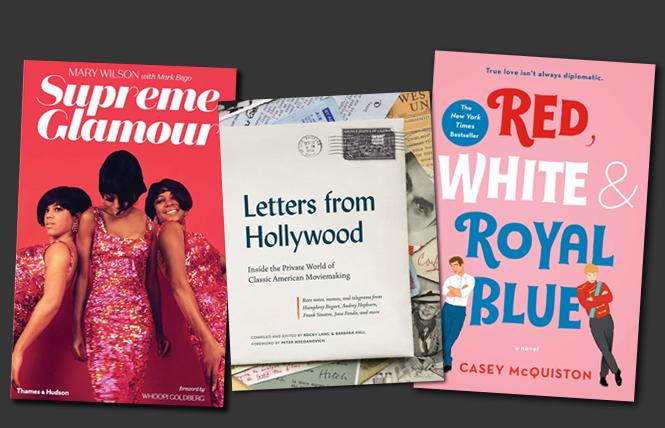 Each year it seems one faces greater challenges in finding the right thing for those on holiday gift lists. Books are a splendid solution to that dilemma. Superb choices abound.

Baby boomers will be thrilled with one of the best of the season's coffee table volumes, Mary Wilson's (with Mark Bego) "Supreme Glamour" (Thames & Hudson, $40). This is a lavishly illustrated history of the gowns, shoes, and wigs worn by Diana Ross and the Supremes during their historic domination of the pop music scene. Wilson, an original member of the group, remembers it all very well. Whoopi Goldberg provides an insightful introduction. Recipients will hear a symphony after they unwrap it.

Another impressive tome, compiled and edited by Rocky Hall and Barbara Lang, "Letters from Hollywood — Inside the World of Classic American Movie Making" (Abrams, $40) is filled with entertaining documentation about the egos, humor, and malice of legendary stars. Paul Newman, for example, wittily writes to director William Wyler and producer Ray Stark, declining their offer to co-star with Barbra Streisand in her 1967 film debut "Funny Girl." Newman cites his inability to sing or dance, although the reader senses that he didn't relish the idea of appearing in a showcase for Streisand. Equally entertaining is Joan Crawford's letter to fan magazine writer Jane Kessler Ardmore, describing her excitement at being presented to Queen Elizabeth II and Princess Margaret in 1956. They were gracious and charming to the Tinseltown royal. She also expresses her embarrassment that the much younger Marilyn Monroe ("Marilyn Whatshername") and Anita Ekberg were presented at the same time. She gloats over the "howling" they received from a disapproving crowd because their "too tight dresses" prevented them from walking properly. Other gems include Tallulah Bankhead's letter to David Selznick diplomatically but firmly rejecting his suggestion that she could play Scarlett O'Hara unless he found someone better. Ingrid Bergman's note thanking Cary Grant for accepting her second Best Actress Oscar in 1957 for "Anastasia" is hilarious and touching. But Marlene Dietrich writing to her friend Ernest Hemingway about starring in a film based on his "The Sun Also Rises" under Orson Welles' direction boggles the mind.

Casey McQuiston's "Red, White, and Royal Blue" (St. Martin's Griffin, $16.99) is a deliciously comic read. What if America's First Son fell in love with the Prince of Wales? Alex's mother is the President. Henry's is a Queen. The youths have a falling out during a White House photo shoot. Their respective aides work to reconcile them. They succeed only too well. Alex comes to terms with his feelings and is delighted when Henry reciprocates them. Royal wedding, anyone?

A more serious reader may relish Benjamin Moser's "Sontag: Her Life and Work" (Ecco, $39.99), an in-depth biography of Susan Sontag (1933-2004), the deadly serious lesbian intellectual who wouldn't discuss her sexuality, whose opinions, essays, and other writings were much admired in the 1960s and 70s. She and photographer Annie Liebowitz were a celebrated couple, although their relationship was tumultuous. Sontag's landmark 1964 essay "On Camp" established her as a formidable intellectual, even if she sucked the humor out of the subject. Humor, especially about herself, was often lacking. She was relentless in pursuing fame. Moser's assessment will help readers decide if she was a sphinx without a secret or a brilliant social commentator.

Fans of "Downton Abbey" will be enthralled by "The Husband Hunters" (St. Martin's Griffin, $16.19), Anne de Courcy's evocative study of American heiresses who married British aristocrats. During the late 19th and early 20th century, many young women from rich families were sought after by titled, land-poor English lords who needed ancestral coffers filled. Brooklyn's Jenny Jerome was the first, marrying Randolph Churchill. One of their children was Winston Churchill. Other young ladies soon followed her example, though none had such an illustrious offspring.

Manhattan often claims to be the birthplace of gay liberation, an assertion San Francisco can challenge. But what about the other New York boroughs? Hugh Ryan's landmark "When Brooklyn Was Queer" (St. Martin's Press, $29.99) looks at what was happening there from the 1870s, when Walt Whitman was a resident, to the lesbians who worked at the Brooklyn Naval Shipyard during WWII and later. Ryan reconstructs forgotten, often deliberately erased history. He asks important questions about the nature of history, who writes it, how it is preserved, and who keeps it alive. His evocative portraits of courageous people are compelling reads. His groundbreaking research illuminates and documents an important, thrilling part of our past.

"When good Americans die, they go to Paris," quipped Oscar Wilde. That reward for virtuous living came close to being a thing of the past towards the end of WWII in 1944. "The Liberation of Paris: How Eisenhower, De Gaulle, and Von Cholditz Saved the City of Light" (Simon & Shuster, $27) is Jean Edward Smith's riveting account of what nearly happened to France's fabled capital following the successful Allied invasion of Normandy. Hitler wanted to destroy the city. His commanding officer, Dietrich von Cholditz, knowing the German cause was doomed, evaded, stalled, and dissembled, buying time. Charles De Gaulle, proud and arrogant, wanted Supreme Allied Commander Dwight D. Eisenhower to dedicate more resources to freeing the city. He feared a communist takeover or the return to the bloody days of the 1871 Commune. Eisenhower and his advisors wanted De Gaulle, the leader of the Free French, to take responsibility for protecting and liberating the city. Fortunately, those conflicting agendas were reconciled, and Paris retains its magical hold not only on Americans, but on its own residents and those who visit from the furthest and nearest places on the planet.