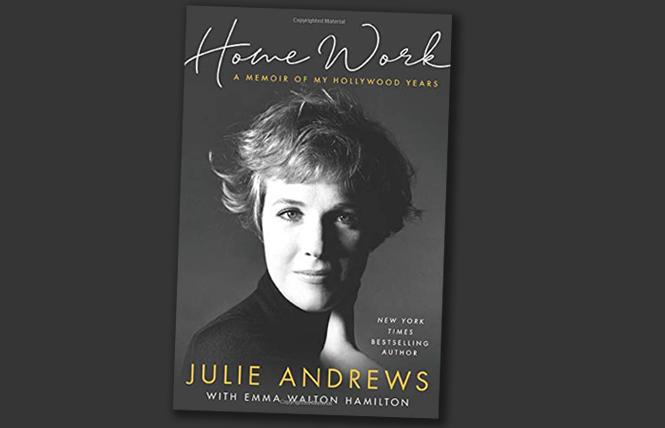 Home Work: A Memoir of My Hollywood Years by Julie Andrews; Hachette Books, $30

Who on the planet Earth doesn't love Julie Andrews? In a 2002 BBC Poll on the Greatest Britons of all time, she was voted #59, beating out Jane Austen, Chaucer, and Tony Blair. In 2015, she made a surprise appearance at the Oscars, hugging Lady Gaga after she had sung selections from "The Sound of Music" to commemorate the 50th anniversary of the film. The Hollywood crowd went wild when Andrews emerged, overwhelming Gaga. She's more popular today than in her 1960s heyday. Even her ex-husband still adores her. Having written about her childhood during WWII, her singing days in British vaudeville when she supported her family, through her triumphs on Broadway in "My Fair Lady" and "Camelot" in her 2008 international bestselling memoir "Home," she continues this second installment beginning with her arrival in Hollywood in 1963 to make her screen debut in Disney's "Mary Poppins." That role not only won her an Oscar, but led to her second iconic cinema performance, Maria Von Trapp in "The Sound of Music." Beginning with a 15-page recap of "Home," the book covers her career and personal life through 1986, encompassing the seven films she made with her second husband, director Blake Edwards.

If you are reading "Home Work" for gossip about Hollywood, you won't find any. Either Julie Andrews the woman has totally merged with Julie Andrews the movie star, or more likely there wasn't much difference to start. The Julie Andrews you see onscreen is the same one revealed in this autobiography: charming, polite, and graceful. Written with the help of her daughter Emma Walton Hamilton, there is limited candor and diplomacy on select topics, but what is most striking is her lack of self-analysis, despite the liberal use of diary entries recorded during these years, even when she admits entering into psychoanalysis. What must have been the most crushing disappointment and professional snub of not getting the role of Eliza Doolittle, which she originated on stage, in the movie "My Fair Lady," is breezily cast off when she describes driving past the Warners Bros. studio during its filming, rolling down the windows and yelling, "Thank you very much, Mr. Warner!" because not getting Eliza lead to her availability for Mary Poppins. How Julie Andrews of her!

One would also think there would be some Sturm und Drang over the end of her first marriage to her childhood sweetheart, costume and set designer Tony Walton, but its collapse is attributed to continual work and travel. Despite her acknowledging feeling like a failure on the day of the divorce proceedings, it seems more like a backdrop to meeting the love of her life, Blake Edwards. Here Andrews lets her guard down a bit. While brilliant and witty, Edwards was complex, even volatile, often depressed, occasionally suicidal, addicted to painkillers, at times a terror to work with, and ultimately disillusioned by Hollywood studios' interference in his productions. He was also a womanizer, and it reached a boiling point when Edwards was having an affair with Lynne Sellars, the wife of Peter Sellars, the star of Edwards' "Pink Panther" films. Finding the appropriate moment to speak with him, she said, "'I don't want us to bullshit each other, Blake. Do you still want our marriage? We can end this right away, if that's what you'd prefer.' 'I do want our marriage,' he finally responded, 'very much.' From then on, things were markedly better between us." So much for marital crisis.

At heart a small-town English girl, perhaps her refusal to indulge in any self-pity is genuine. Any surprises? There are sections on visiting Vietnam and Cambodia in the 1980s on a humanitarian delegation, eventually adopting two Vietnamese orphans, as well as experiences lobbying successfully for the Amerasian Immigration Act, so Asian-born of American servicemen could relocate to the U.S.

One scene sticks out, perhaps illustrating the real Julie Andrews. In the early 1970s, Andrews and Edwards were invited to a party at the home of a powerful Hollywood agent. When they arrived, guests were doing lines of coke. During dinner, the coke was passed around as dessert. When it was offered to them, they both declined. The hosts began pushing Andrews hard. Edwards said to them, "She doesn't need any of that stuff. She's high enough on life as it is."

Long a gay icon, for men due to the campiness of her two most famous 1960s roles, and for lesbians for her butch haircut and subversive portrayals of women (Maria as a free spirit), there is nothing in the book about the subject, though she briefly talks about the challenges of gender impersonation in her film "Victor/Victoria," the female singer who impersonates a man impersonating a woman. Nor is there much angst about baring her breasts in the film "S.O.B.," a comic send-up of her saintly Hollywood image. The book will appeal to her fans, but in our celebrity-obsessed world there is something reassuring reading about a hard-working life untouched by scandal. To quote Eliza Doolittle, isn't that loverly?