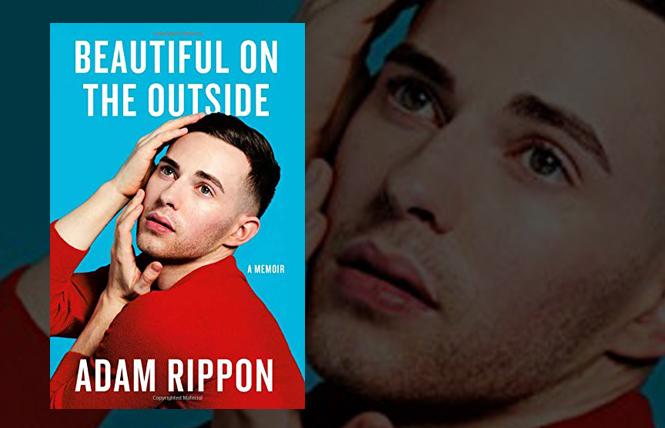 Beautiful on the Outside by Adam Rippon; Grand Central Publishing, $28

In his effortlessly breezy and entertaining memoir "Beautiful on the Outside," U.S. Olympic athlete Adam Rippon demonstrates a natural knack for comedic writing. Combining the perfect amount of sass, self-deprecation, and gay wit, the bronze-medal-winning Olympian has struck a winning tone with his autobiography that tells the inside dirt behind the struggle to become a successful figure skater at any cost.

Rippon admits he hated ice-skating when he did it for the first time at age five, after begging his parents to take him to a small ski resort in their hometown of Scranton, PA. Not only did he fall hard on the ice seconds after balancing himself, but his mother refused to purchase the white muff he'd wanted to wear based on a painting of a "fabulous Victorian woman" he'd adored on a Christmas popcorn tin. "My poor mother," he writes. "She didn't know who she was dealing with."

Costumes became a large part of his childhood and early adulthood, right up through the times his overbearing mother would drive him to skating practices and began homeschooling him. His career began advancing beyond anyone's expectations, including his own. His dedication, obsession, and hard work toward competitive ice-skating began to gel once Olympic possibilities surfaced and the promise of winning a medal came into focus.

He vividly describes life at a high-performance camp and the shock of being invited to a weeklong training at the Olympic Training Center in Colorado Springs. Grueling training regimens began, hosted by a mixed array of trainers, including a detached Ukrainian named Denis who called him a "grape" athlete who was too juicy and needed drying out. His book gets personal with anecdotes about his parents' divorce, Rippon's first crushes on men, his coming out to his mother, and how several short-lived relationships gave him "the ability to be honest to everyone in my life about my sexuality."

He is candid about his early struggles with money and being chastised for being gay. Rippon's career went through serious disappointments once he failed to make the Olympic Team in 2010 & 14, but he never gave up on the dream of winning a medal. The last third of the memoir affords a more in-depth view into Rippon's life as the first openly gay man to become a member of the U.S. Winter Olympic Team.

Rippon dedicates the book to his haters, whom he thanks "for being my motivators," and whom he snappishly calls out as "not that cute, your hair is uneven, and you look dusty." He writes about finding inspiration through dark times from watching reruns of "RuPaul's Drag Race," recalling that "the contestants still put on a brave face and a glittery gown and still win, even after going through all sorts of awful things with their family and with society at large."

With a fun mix of humor and integrity, Rippon tells the heartfelt story of his eventful life as a gay athlete and his epic bronze medal win for the figure-skating team event at the Winter Olympic Games in Pyeongchang, South Korea in 2018.