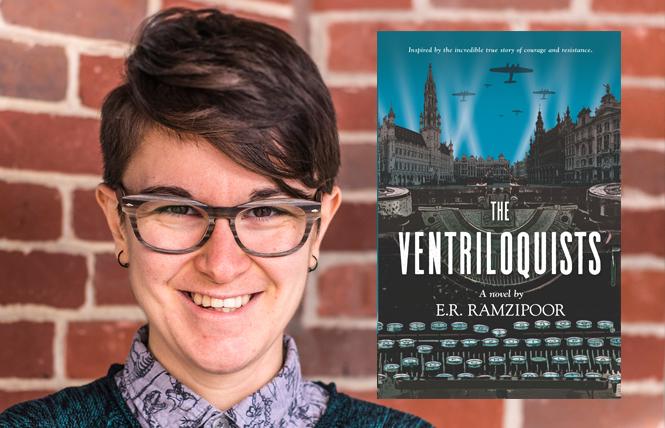 Call it an uptick in the collective unconscious or call it news, there's no mistaking the mushrooming of new books, fiction and non-, about Fascism, most of them focused on what an elder historian famously called the rise and fall of the Third Reich. There's even a pink-triangle subgenre, saluting the roles of queer people in the fight against Nazi oppression. "The Ventriloquists" (Park Row Books), the impressive debut novel of E.R. Ramzipoor, makes a rich contribution to the enterprise.

An Oakland-based, out lesbian, Ramzipoor has built her large-scale yet finely calibrated novel on a sliver of the graduate work she did at UC Berkeley. There she came upon the efforts of a real-life journalist, Marc Aubiron, to contribute to the Belgian resistance during WWII. Aubiron and his cohorts sabotaged the work of the Nazi Ministry of Perception Management by inserting what we must now call fake news — sendups of the Germans and resistance-supportive disinformation — into Le Soir, a newspaper still published today but weaponized by the Nazis during the occupation. Ramzipoor's fictionalized Aubiron says it best: "The Germans use Le Soir to take the people's hope. We will use Faux Soir to give it back."

From that sliver of lost history, the author has fabricated a complex, fast-moving tale of intrigue and suspense with a story-line as graphic and addictive as "The Man in the High Castle," if with less resort to convention and cliche than the TV series. It's powered as much by its architecture and rhetoric as it is by its compelling plot.

Ramzipoor uses carefully demarcated sections to marshal the story into the 20 days leading up to the publication of Faux Soir, tucking those into a present-day time frame. A character named Eliza, who basically mirrors the author, her research and her fertile imagination, coaxes the stories we read from the memories of a witness, Helene. This framing story contains some of the book's most emotionally touching writing, and the resulting stories are vastly more substantive than mere flashbacks.

While the reader hears from multiple narrators of varying reliability, what both drives the story and makes it cohere is the strength and clarity of the writing. Most of it is in the rhetoric that English best accommodates — the subject-verb-object sentence; independent clauses introducing, not following, dependent ones — yielding sentences that fly like arrows all-but-silently to their targets.

The language provides a sturdy frame that shows its individual beauties to best advantage. As we first meet the novel's dominant character, David Spiegelman, a handsome, gay Jew with a knack for words fit for the mouth of others, Ramzipoor writes, "Spiegelman opened three envelopes that lay in a pile on his desk, one after the other, setting the contents aside like organs during a transplant."

The novel's most florid character, Lada Tarcovich, a lesbian proprietor of a brothel who does right by her girls if by few others, gets involved in a car-stealing caper that lands her in court before a female judge, Andree Grandjean, who promptly locks her up. When Grandjean reappears in Tarcovich's cell, with more than justice in mind, the marvy madam observes, "The green trousers and work shirt suited the judge, holding her soft places in firm, gentle hands."

The principal characters all have monikers as well as names. Spiegelman is The Gastromancer; Tarcovich is The Smuggler. But lest this tease or confuse the reader, there's a dramatis personae of main characters at the front of the book, and as the narrative passes from ventriloquist to ventriloquist, the storyteller of the moment is named.

The ventriloquism metaphor itself is similarly multilayered, but Ramzipoor elaborates on it in pieces over the span of the novel compellingly but without unnecessary philosophizing. It basically has to do with putting words in the mouths of others not just intentionally but pointedly. Also, talking shit.

The Gastromancer Spiegelman learns of it from "Amazing Stories from Far Off Lands," a book he discovered and purloined as a child. An encyclopedia of wonders, it taught him about the exotic, including "what women looked like naked, what men looked like with other men." It was sealed into his consciousness by "the photograph in the back of the book, the image of the man with his puppet." But if ventriloquism is Spiegelman's signature genius, it turns out that others have at least touch of it too, in that way that the truth of all stories is locked in the view of their tellers.

The authorial daring in "The Ventriloquists" is its toggling between comedy and tragedy, farce and the deadly serious. The novel is not only about bravery but also about its being crushed at the hands of the oppressor. Ramzipoor's skillful juggling of the modes gives her novel, by any measure a great read, its feeling of contemporaneity.